A couple of hours south of Maine’s Acadia National Park lies Prouts Neck, Maine. Here was Winslow Homer’s last home, studio and subject. Living on the Maine coast insures many hours of fog bound imagery.  Fog simplifies forms and dissolves their edges.  For Homer, fog was a compositional asset and aid. In example 1, an 1894 painting of his studio in an afternoon fog we see how Homer elegantly exploited the unifying and simplifying effects of fog. 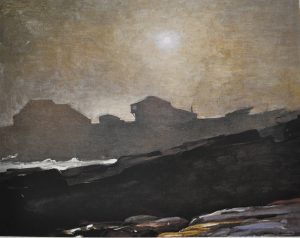 Frederic Church painted the foggy Otter cliffs along Acadia’s Eastern shore. In example 2 see how he too use the fog to simplify the shape of the cliffs  and create an aura of mystery. 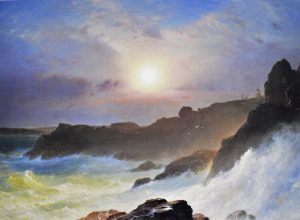 James Whistler used a mystery infusing fog  to blurr and simplify his subjects as seen in his painting from the 1870s (example3). 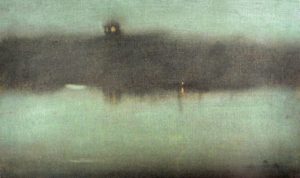 As I revisited the Maine coastal locations of Homer’s studio and Church’s Acadian cliffs I also discovered a mysterious cloaking fog. To create the effect of foggy  uncertainty  I began example 5 (oil on aluminum) using an inverted older painting as a substrate.  This substrate (example 4) would give me opportunities for building textured richness and finding small luminous surprises as I scraped into my overlaying paint. The edges of the tree tops and receding rocks would all succumb to the dissolving effects of the fog.

Example 4. Step one, the substrate image before inverting. 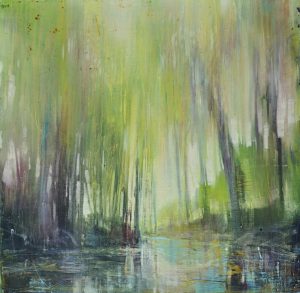 Example 5. Step two, the present state of the painting, Fog at Otter Cliffs, an oil on aluminum. 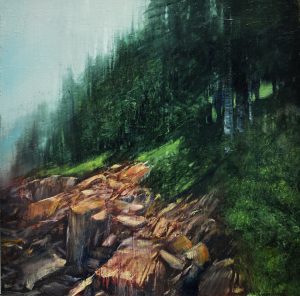 With Example 6, an oil on brushed silver laminated aluminum I tried an unusual use of violet in the upper area to contrast with the light warmer toned shoreline. The luminous obscuring mystery of fog can be found along the upper horizon but also resides in the sky-reflecting water in this image of low tide at Otter Cove. 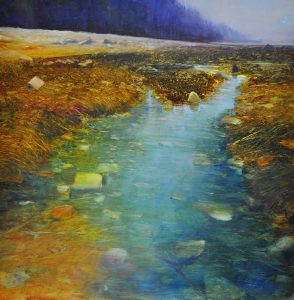 Examples 7, 8, and 9 presents a misty landscape of Acadia within the island. The three steps represent the sequential development of the image. Here the fog descends from above hovering over the distant mountain. It resumes is obfuscating effects within the reflecting water below.

Example 7. Step one, the blocking in of the design. 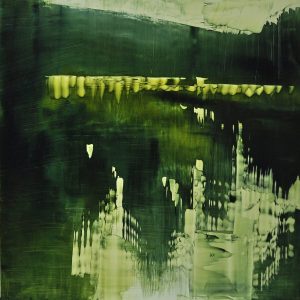 Example 8. Step two, a texturing within a monochromatic grisaille. 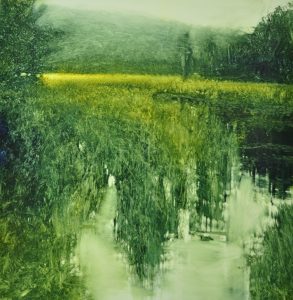 Example 9. Step three, the painting in its present state. 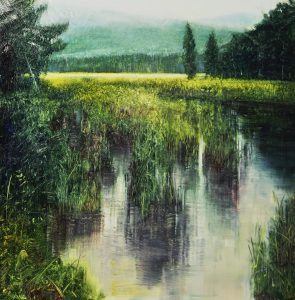