In the notebooks of Leonardo DaVinci  Leonardo presents the essential elements of painting. He uses principles of contrast to illustrate these elements. Ancient Romans gave us their ideas on this subject just as 1000 years ago Sung Dynasty Chinese painters provided their criteria. There many coincidences between them. I am interested in the coincidences because, they reveal how painting shares principles across time and cultures.

DaVinci summarized his principles into five pairs of opposites: light vs. dark; motion vs. stillness; near vs. far; body and color; shape and location.  The last two categories need a little illuminating. Body and color represent the relationship between the form and lighting and coloring. Shape and location represent the placing and scaling the shape within the picture’s space. These are by no means a summary of all of the principles of painting espoused by DaVinci. They are one set.

I want to demonstrate how his criteria can be employed in examples.

Consider example 1, “Brooklyn Bridge Walk”.  I give an overt reference to linear perspective as first developed in the 1400s in Florence. By the mid 1400s if an artist did not know how to use linear perspective then, they were out of a job. DaVinci excelled in using this system. He also thought it was obligatory knowledge for artists.  But, DaVinci noticed that we did not see in accord with the rules of liner perspective. Our visual experience required demonstrating different qualities of perspective within paintings. He stressed blurred edges or S’fumato effects to give a sense of volume and motion to the artist’s work.

Da Vinci further stressed that objects were seen with greater edge precision up close but, edge precision dissolved over distance. Linear perspective could show objects getting relatively smaller over distance but, it did not account for the sensation of diminishing edge acuity and the blending of forms over distance.

In my example 1, “Bridge Walk” and in example 2 by J.M.W. Turner, an oil of Venice from 1844 you see edge acuity diminishing and forms blending in the distance. 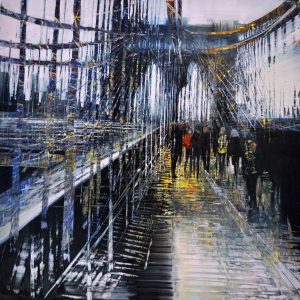 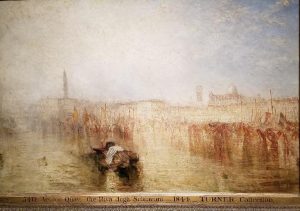 My next example 3 uses a landscape to illustrate shape and location as well as color and body relationships. Here you see the foreground with sharply defined shapes on the water which lose their sense of  individuated color over distance. Simultaneously, the shapes lose their automony over distance. They not only diminish in size but also in clarity and separation from their location within the painting. 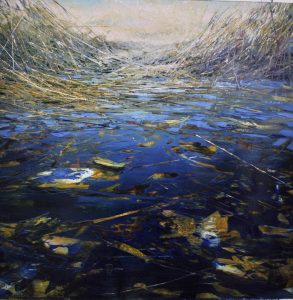 Examples 4, 5 and 6 demonstrate DaVinci’s principle of how color is fitted to forms and then, degrades and dissolves over distance. It also demonstrates his idea that we can look into chaos to find forms.  Example 4 is a blurry surface of merged colors without discrete edges. I find the forms living in this soup as DaVinci advised artists to do.

Example 5 presents the discovered forms but  so far without the autonomous coloring as he advised. Example 6 puts color into selected forms as well as dissolves the edges of other more distant forms. His emphasis contrasting motion with stillness can be seen here in the blurry patterns of the pavement vs. the sharp edges of the figures. Here, shape and shape size have a relationship to location as well. 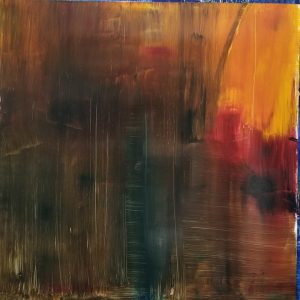 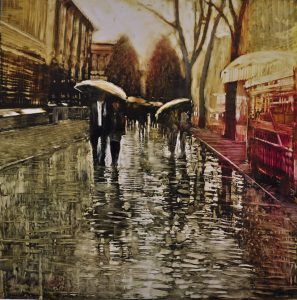 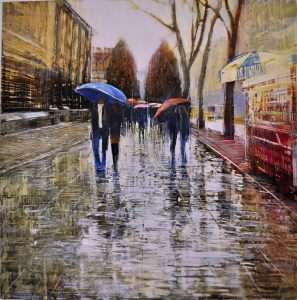 Example 7, “Take a Spin” presents unstable motion against stable forms.  The bridges and roads spin and blur while a car with sharp edges appears still in comparison. 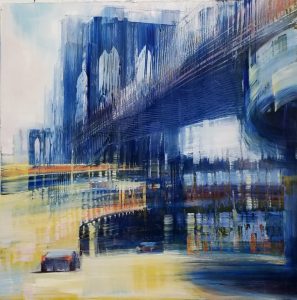 I have a few openings in my two upcoming 5-Day intensive workshops. They are each called “New Horizons and Old Traditions in Landscape”. The first week runs from Monday, March 30 – April 3. The 2nd week runs from Monday April 13 – April 17. Fee is $875.  These intensive workshops pack a smester’s work into 5 days. To register contact the Silvermine School of Art in New Canaan, Ct. at 203 966 6668 ext 2 or www.silvermineart.org