We grow weary of styles because of their familiarity. When we tire of them we cease to notice them; they lose the ability to surprise us.  Our under-stimulated attention has become too accustomed to a style so,  we look for another.  Markets are built on this reflex of ours. Gombrich calls it “Aesthetic Fatigue”.   Our appetite for the “new” is  sated through perpetual style modifications. We are not attracted to radically new ideas or inventions because they are too unfamiliar. Instead, we prefer smaller modifications to existing styles.  Styles begin to parody themselves within the life of a style cycle.  To quench our thirst for a new style  (a new idea or novelty) we attend to minor changes to established familiarities.  Because we are so attentive to subtle feature changes they do not feel subtle; they feel significant and rewarding.

V.S. Ramachandran observed that the arts use feature exaggerations to attract attention.  Our attention is finely tuned to nuanced exaggerations of a particular feature. We suppress our attention to the remainder of the subject’s infinite features.  Exaggerations become highly focused or, simplified.  The subject is reduced in complexity to focus our attention on a specific exaggeration. In the course of  art history we reduced the complexity of landscape painting with formulas of composition, subject matter and coloring. We further simplified and exaggerated aspects  of these categories as landscape painting moved toward abstraction and modernism.  Eventually painting’s exaggerations were about singular exaggerations, minimalism.  The ultimate exaggeration would be to dispense with the canvas,  conceptualism.  That left us without activity for the eye which had been our biological partner in the motivation of looking for surprise.  It’s hard to look without the visceral feedback of a subject.  The eye and the brain our inextricable partners. They are not two autonomous players. There is no mind/body split.

Among artists’  various motivations is their competition with others for status, fame, wealth,  and influence.  Artists even compete with themselves. I know I do.  I evaluate my work and wonder if it is surprising.  If I find the work wanting then, I consider how to exaggerate the subject, to exaggerate it through simplification, through further distillation.

What follows are examples  of exaggerations through simplifications. In example 1, as evidence of my quest for surprise I merged  digital photo technology and painting.  I have a horizontally compressed photo of NYC as seen from a Metro North Train window (example 1). In example 2, I reprinted this image on 140 lb. hot press  water color paper on a 13×19 sheet. I then varnished the paper. I painted a new sky (in oil), added a deeper urban backdrop,  and heightened some building colors.  The result is a mixed-media piece with an exaggerated sense of light and, exaggerated forms and colors. 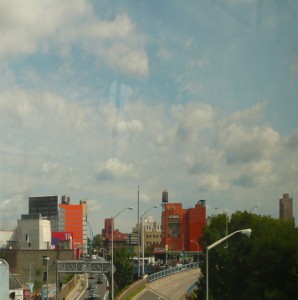 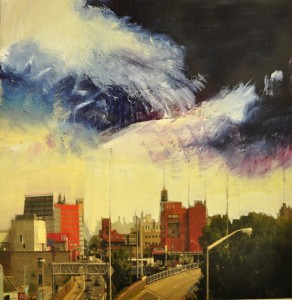 J.M.W. Turner also competed with himself. His competition pushed him to greater dramatic simplicity. Here are two examples of Venice paintings.  Example 3  was painted more than a decade before example 4. Turner’s exaggerated simplifications are evident. Simplification comes with the  reduction of selected information. 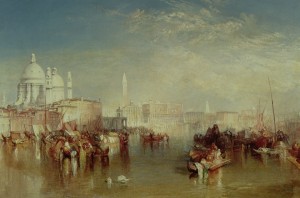 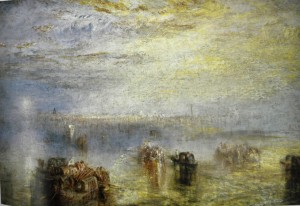 With examples 5,6,7 and 8 you can track my effort to squeeze out numerous small marks in favor of fewer,  larger  and more gestural marks. Also observe how I increased the contrast in color and value while simultaneously concentrating the luminous area.  The simpler, smaller area of light feels more potent in contrast to its surroundings. 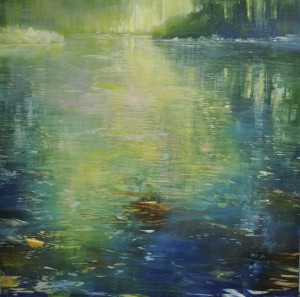 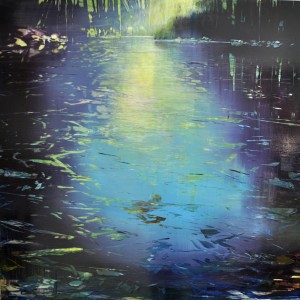 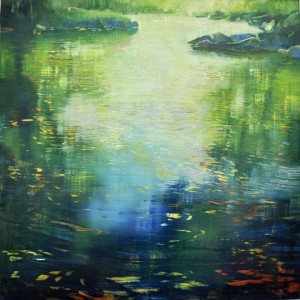 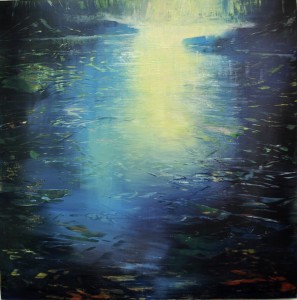 Examples 9 and 10 illustrate the process of reducing the autonomy of the pictures components (including figures) as well as the progression to greater color contrast. The overall shape becomes more unified because, it is less differentiated. The painting became brighter and simplified through exaggeration. 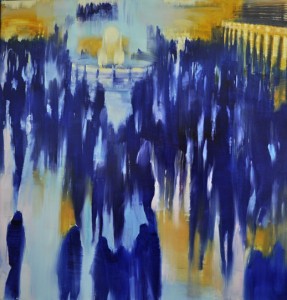 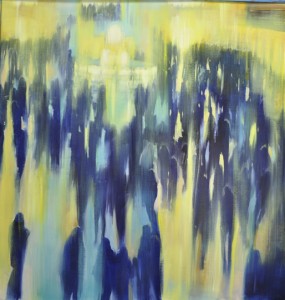