We can trace an influence of science on art through Ernst Haeckel, a mid 19th century scientist/artist who inspired the visual arts through his botanical and zoological illustrations.  The Art Nouveau movement of the late 19th century owes much of its sense of form to Haeckel the scientist/artist (example 1, Haeckel illustrations).  Art Nouveau architects, painters, and jewelers like Binet and Galle praised Haeckel’s scientific drawings as a source for new expressive forms.  Example 2 presents one of artist/architect Rene Binet’s buildings for the Paris World Exposition of 1900 using Haeckel’s studies as his model. 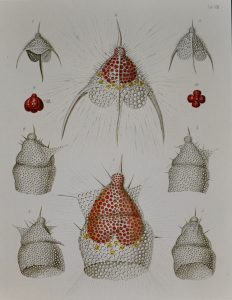 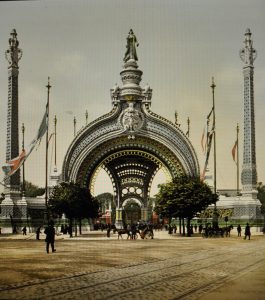 Whether we consider Art Nouveau artists who looked back to mediaeval stylized interlacing floral patterns (example 3, mediaeval design) or to Haeckel’s illustrations, artists usually find inspiration in varieties of sources. We find further evidence of these sources in the work of Art Nouveau artists like Aubrey Beardsley and Alphonse Mucha. 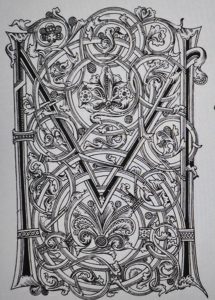 In my own work I have turned to some of these same sources for compositional ideas as well as developing a vocabulary of varied botanical forms.  I include a page of Haeckel’s tree moss illustrations in example 4.  Consider how this sort of illustration could affect my observations, designs, imbedded perspective and stylized patterning of the coneflowers I found in a park near me. Notice how I placed the viewer’s point of view deep within the flora. Example 5 represents my first of two paintings of the subject. It is 36×36.  Example 6 represents my second and more ambitious painting, 48×48. 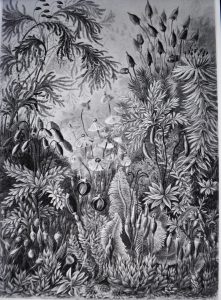 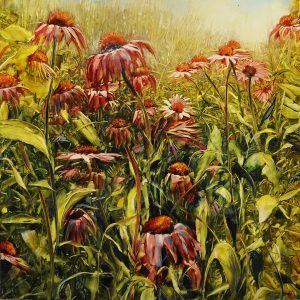 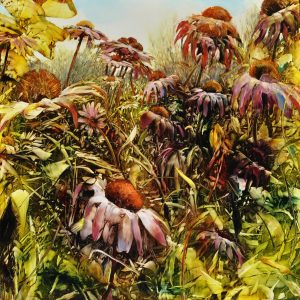 Borrowing the “M” structure uniting the 12th century floral tracery seen in example 3 I began a 36×36 landscape on brushed silver aluminum.  Example 7 presents step one and example 8 presents the image in its present state. 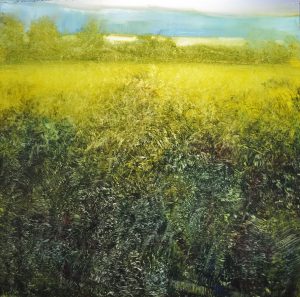 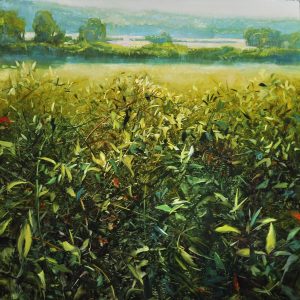 At the moment I am working on an architectural series involving arches. They also partly refer back to the earlier example of Binet’s Paris Exposition structure and the studies of Ernst Haeckel (see example 9, Bridges). 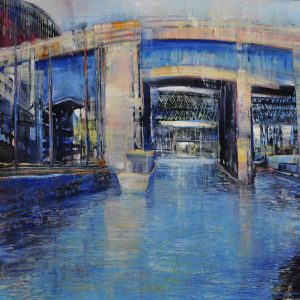 Connie Simmons of Simmons Art and I have just posted another YouTube video of one of my demonstrations of painting waves. Just click here for David Dunlop Sea and Shoreline Wave Study.
If you are interested in Shorelines, Waves and Ocean painting  we also have a new  series Painting Seas and Shorelines  (DVD or online) which gives hours of demonstrations in a variety of examples, plein air and in studio. Available at Daviddunlop.com

Visit Jerrysartarama.com then, enter art of the Carolinas in their search box to register for the workshops or, go directly to artofthecarolinas.com or, call 800 827 8478 ext 156.