The Romans traded for lapis lazuli which was mined in Afghanistan as it still is today.  They named the stone after its long journey from the east across the Mediterranean “Ultramarine blue” not because it looked like the blue of the sea but, because it came across the sea to Rome.

As a semi precious gem stone with colorant properties ultramarine blue has a long history. Here is a brief look at the changing uses ultramarine blue. Let’s begin late in its journey; we find ourselves in Filippino Lippi’s studio in the late 1400s. Ultramarine blue is expensive and rare.  Therefore, its use was suited to color only the most sacred figures, the Virgin Mary (example 1).  The tradition had Mary surrounded by gold leaf and clothed in expensive vermillion or carmine and ultramarine blue. 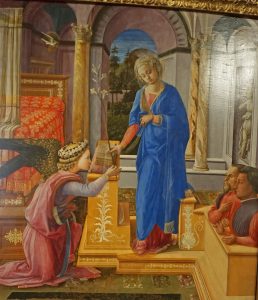 In this period Venice, the Serene Republic, had more autonomy from Rome’s Pope than other cities. They enjoyed more theological and artistic independence. Consequently Venetian artists were the first in Italy to break the rules on the use of ultramarine blue. The Bellini brothers had taught and influenced Giorgione and Titian.  All three would pioneer ultramarine blue’s use in other parts of the picture than just on Mary.  Here in example 2 we see a Giovanni Bellini painting from 1485 with a use of ultramarine blue in the sky (representing the dome of heaven).  Other colors have faded within this painting but the ultramarine blue is more colorfast as you can see in the sky. 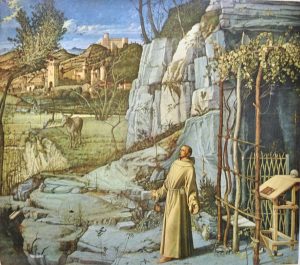 By the early 1600’s Jan Brueghel the Elder used ultramarine blue in the mountains of his small and precise landscapes (example 3). This example is one of his series of the four elements in the collection of the Doria Pamphili in Rome. Our example here represents “Air”. 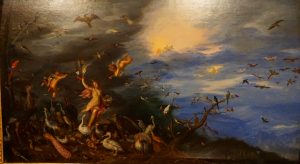 Throughout the renaissance color had been celebrated for its decorative, illustrative, and symbolic value. Ultramarine blue served artists well in every category. Its only downside was its prohibitive cost.  Early in the 19th century ultramarine was chemically synthesized and became more affordable and widely used.

A cultural tide of chromophobia came over Europe in the wake of the reformation and still lingers, especially in New England where a fear of using color and appearing garish inhibits artists’ use of color. But, if vivid color worked for Titian and Van Gogh then we should feel free to indulge the luxurious sensation offered by ultramarine blue and its complements.

My following examples demonstrate a generous application of blues including lots of French Ultramarine Blue Light Extra in its symbolic role as a denoter of the celestial and the marine.

Example 4 presents step one of a painting evoking a shoreline at twilight or dusk, “ Shoreline Twilight”  an oil on Dibond, 36×36, 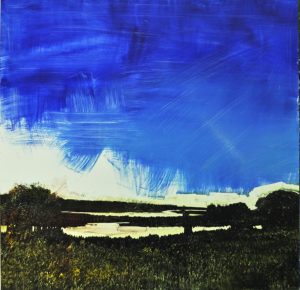 Example 5. Presents step two of the painting, its current state. 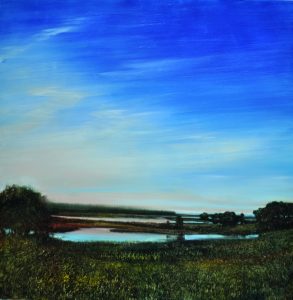 Example 7. Presents step two of this painting as it appears in its current state.

My final example illustrates the color boosting effects of contrasting complements with ultramarine blue. Note that both the ultramarine blue and the vermillion (formerly the same colors cloaking Lippi’s Madonna) invigorate each other where they are adjacent.  Example 8 demonstrates my initial laying in of the design. Example 9 presents further development of the image and Example 10 presents the painting in its current state with hot vermillion bouncing about the image. 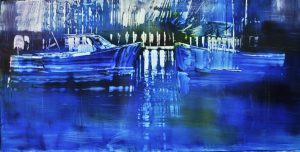 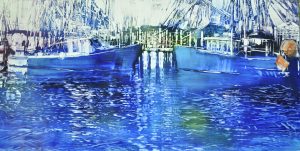 Example 10. Step three of the “Fishing Fleet” in its current state. 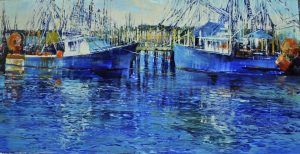