Long before Claude Lorraine introduced atmospheric perspective effects in the 1600s Chinese artists of the Song Dynasty had already developed these effects in their landscape painting in the 10th century 600 years earlier. Among their basic tenets was the principle of substance vs. absence. This meant that a misty amorphous air would lie in the space between receding forms, between mountains for example.

I have wondered if merchant/explorers along the Silk Road brought an understanding of effects of atmospheric perspective back to Italy from China. The design coincidences between Byzantine, Persian and Indian painting and, Chinese painting from the 10th century onward are too obvious and numerous to be dismissed. The mixed culture references in rendering geologic and meteorological imagery share many similarities.

J.M.W. Turner looked to Claude as his model for creating atmospheric perspective but, he could also have found the effects in the much earlier work of Fan Kuan. 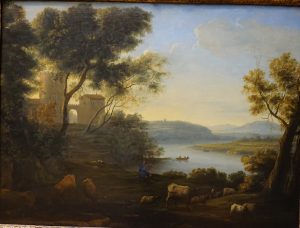 Example 3.  After Fan Kuan, demonstrating atmosphere in painting on silk from 1000 CE. 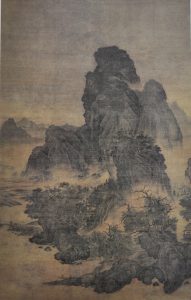 In last week’s blog post I considered Song Dynasty landscape painting and, compared it with my efforts to model such painting ideas in one of my vertical landscapes (example 4). 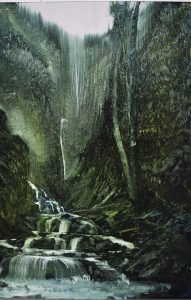 This week I scaled up the size of the work from 18×12” to 48×36”.   I began the 48×36” painting as a more expressionistically styled work (step one, example 6). Next, I emphasized more atmospheric perspective here as seen in example 7, step two. These foggy atmospheric effects softened edges, created more edge uncertainty and a deeper feeling of space.

Example 6. Step one of the “Valley Gorge” 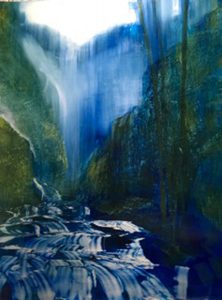 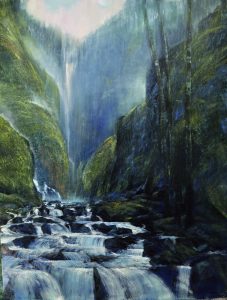 At present I am applying the obscuring and romanticizing effects of atmospheric perspective to different works (example 8 present state). 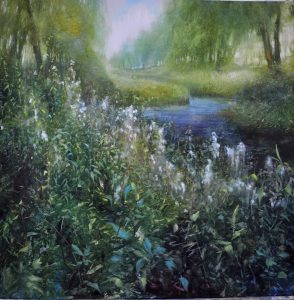