Our eyes are designed to see colors in daylight. The brighter the light the better our cones can sense the micro wavelengths of yellows and reds especially. As light is diminished we detect less color but, we can still accurately discern shapes and value relationships. Different optical nerves work better in bright light, like our cones whiles others, the rods, take over as we lose external light.

When Delacroix visits Tangiers he experiences blue/violet colors in the shadows of the brightly light midday streets.  Through the French scientist Michel Chevreul, Delacroix would later discover that this phenomenon was biological and a function of afterimage or, successive-color-contrast effects. Monet would have the same experience looking at shadows on snow in sunlight. Those shadows appeared to be blue/violet.

Example 1 demonstrates the after-image color effects as discovered and published by Chevreul in the late 1830s.  These discoveries would alter the course of painting and influenced the development of impressionism. 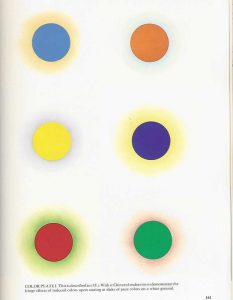 Later 21st century artists like Damien Hirst would take Chevreul’s vibrating page of color circles and re-introduce versions of them to contemporary audiences.

Later in the early 20th century Johannes Itten creates the color study program for the Bauhaus school in Germany. He too studies successive and complementary color contrasts. Contrasting colors and values affect our sense of relative brightness and relative size; they even affect our sense of spatial location. Colors and values can appear to recede or advance. Example 2 presents Itten’s demonstration of simultaneous contrast effects. 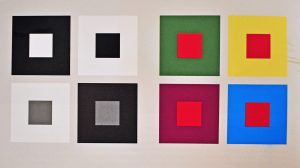 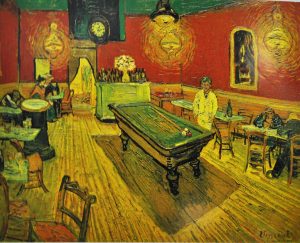 I use complementary color contrasts to build both vibrancy and spatial effects. In examples 4, 5, and 6 you can follow the sequence for building color vibrancy.

Example 4. Step one, “Farewell to September “a 24×24” oil on Dibond with a yellow acrylic underpainting seen here.

Example 5. Step two, the yellow underpainting is over-painted with dark blues in oil as you see here.

Example 6. Step three and the current state of “Farewell to September”. Here selective excisions are made into the dark overpainting  using squeegees and brushes to reveal the yellow underpainting. Additional colors were added as well. 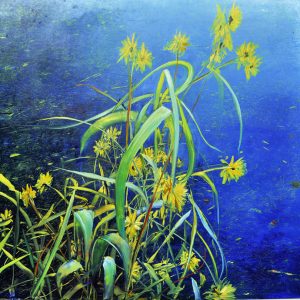 I invite you to join me in my October zoom classes Tuesdays or Saturdays or both. Registration is at daviddunlop.com.   I provide painting demonstrations, art history, information on the psychology of vision and personal critiques of your art works using digital drawing tools if you desire that.