The appearance of submerged subjects vs. subjects resting on or above water has long beguiled artists. Leonardo Da Vinci was the first to successfully evince the illusion of translucence. Previous artists had tried but their efforts appear unpersuasive to modern viewers.

To convince the viewer to suspend their disbelief before a painting of translucent effects requires understanding how we perceive depth and translucence through water. This problem with its promise of magical illusion intrigues me to.

To persuade a viewer that they are looking at calm waters involves making credible reflections. These reflections need to be in harmony with the overall paint handling above the water and, in the subject of the reflection. Monet was able to do this with a consistent harmony of touch and a study of the reduction of values and colors within areas of reflection. Monet expanded our sense of the psychological effect of watery reflections.

Before Monet artists also followed the criteria of diminished value range and color range within the area of reflection but, they carefully rendered the outside contours of their subjects, i.e. the trees or rocks which were to be the subject of the reflections. You can see this in example 1, a watercolor from 1820 where the areas of reflection appear softer and blurrier.

By the mid 20th century artists like Andrew Wyeth who had spent a lifetime studying the appearance of reflections on water, the translucent qualities of water and, the appearance of material lying below the surface. He explored these ideas in watercolor. He could rapidly generate varieties of watercolor effects which were textured and partially blurred. When these effects were set against sharp high contrast shapes they then appeared to be underwater. See example 2, a watercolor by Andrew Wyeth. 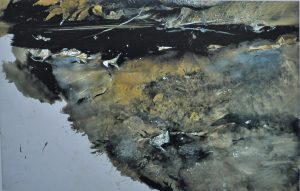 I have also experimented with watercolors and their ability to generate complex texture patterns. I then glazed those patterns with both watercolor and oil paints as you can see in example 3. 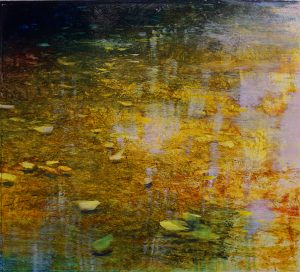 I have also used oil paints in the same manner as the watercolors, to generate an illusion of natural textures. What follows are step by step illustrations of oil on brushed silver Dibond. I begin by creating a varied set of colored textures as you seen in example 4.

Example 4. Step one, Creating a field of colored textures, 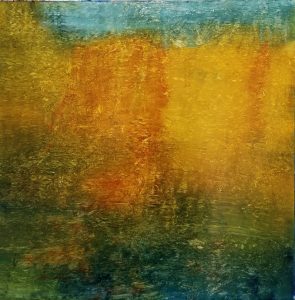 Example 6. Step three, creating more specific shapes that float on the surface and their shadow shapes. The sharper, brighter shapes appear to rest on the surface. To heighten the sense of depth in the water I placed soft shadows slightly below the bright (leafy) shapes.  This caused them to feel suspended above the bottom. In example 5 I overlaid areas with both darker and lighter glazes. The darker blue glazing was applied to the bottom of the picture. This heightened both the feeling of depth and the illusion of shadow. These final glaze layers were a combination of translucent and opaque paint films. 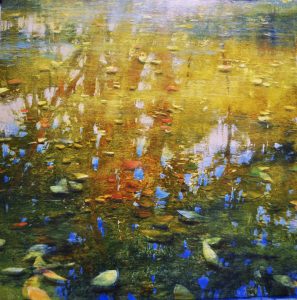