A technique familiar to printmakers involves adding layers to a print, like an etching. The artist begins by checking their progress in printing a 1st state. Then the plate is reworked or additional plates are added. The image proceeds through 2nd and 3rd and 4th states. It is perpetually modified.  You can do this will all forms of printmaking from photography to etching to monotypes to silk-screens.

Painters with printmaking experience bring this multi-layered modification method to their painting process. Rembrandt did this. So did Pierre Bonnard. In Bonnard’s case we find an artist fascinated with patterns and color contrasts. He culls patterns from domestic life. In example 1 you see a Bonnard from the 1930’s in which he explores patterns found within his bathroom while observing his wife and dog. 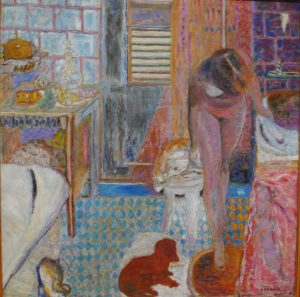 Abstract expressionism unfolds in New York a decade later and, we find  Lee Krasner exploring dense patterns of abstraction without an overt relationship to representational patterns (example 2). 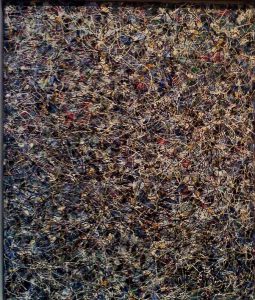 As we enter the 21st century we find artists like Paige Laughlin experimenting with domestic interior patterns layered using new materials like translucent Mylar as you see in example 3. She had earlier likely encountered Mylar overlays common in anatomical texts presenting the body’s skeletal and muscular and circulatory systems. 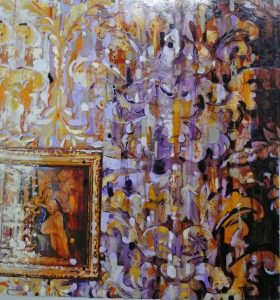 In my following two painting examples I present images which begin more rooted in representational patterns found in nature.  Next, these progressively fractured and abstracted by over-layering additional patterns until the initial image is subsumed into a more ambiguous and abstract image.  Examples 4 and 5 trace an image that began as a pattern of autumnal foliage hovering over a stream.  This image is overlaid with a dark, deep blue which is selectively excised to reveal a perspective  of  patterns receding into lighter and smaller patterns. There is a linear perspective scale shift going on here.  Next, the image receives additional layers of loosely painted gestures to add to the complexity of the patterns. 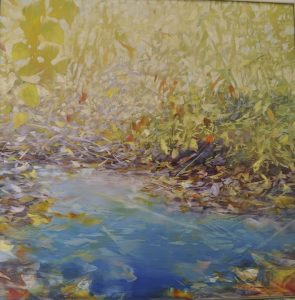 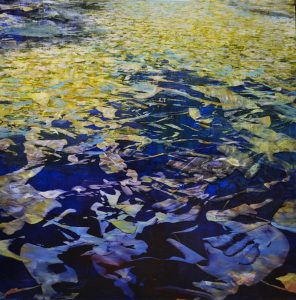 Examples 6 and 7 demonstrate a similar evolution toward abstraction from a loosely representational pattern.  Example 6 introduces a pattern of color contrasts established with yellow leaves against a blue surface.  Next, the image is recovered with darker colors which are layered and excised to harvest colors  hiding underneath . This is a multistep process. You are seeing both an earlier stage and the latest stage in the two examples seen here. 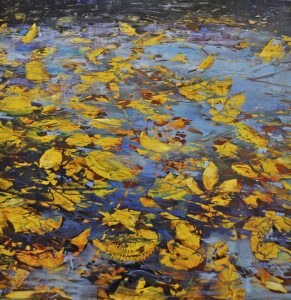 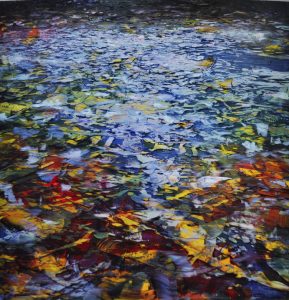 I invite you to join me in my upcoming in-person workshops. The next is at the Artists Association of Nantucket in Nantucket, Massachusetts at the Visual Arts Center at 24 Amelia Drive .  Contact by telephone: 508 228 0772 or, Nantucketarts.org for my 3 day workshop in mid August (see this website for more information or contact the Artists Association of Nantucket directly).  Another in-person workshop is planned for the first three days in September at the Centerpiece Gallery in Raleigh, N.C. call 919 870 5342 or contact@thecenterpiece.com

I invite you to join me this Wednesday, June 30th at 1 PM EDT or a set of demonstrations on “Sky Sea and Shore” painting. You can register at this website, daviddunlop.com

I invite you to join me for July’s 3 Tuesday and/or Saturday workshops where I provide art history, painting demonstrations and personal critiques of your own paintings and, recordings of these programs.