Earlier in the 20th century, before surrealists like Max Ernst discovered the magical effects of decalcomania other artists from as early as the 1500’s had tested its possibilities. At its core, decalcomania begins as a type of transfer or monoprint. The artist spreads his pigment over a surface then presses paper, stone, or canvas on to it.  The resulting textures can resemble the effects of a frosted window pain.

The variety of effects depend upon the media (watercolor, ink, acrylic or oil) and, in the case of oil paint, the effects depend upon the thickness of the paint, the viscosity of the oil paint, and the pressure applied (pressure can be applied directly in the transfer or by pressing and simultaneously sliding the top sheet over the bottom sheet of canvas, copper, panel, paper etc). 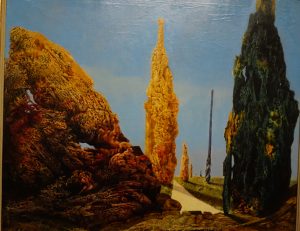 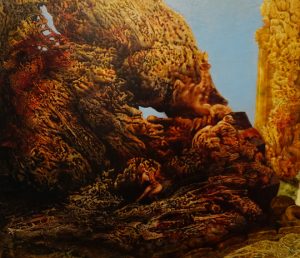 I will walk you through the decalcomania process beginning with the photo I used as my original inspiration (example 3, photo).  This photo is the result of combining two different photos. I wanted to create a visual field that would not anchor me to tightly representational information.

The next step was to cover a sheet of dibond aluminum with pigments that were a loose interpolation of my photographic resource (example 4).  I then pressed the dibond face down onto another sheet of similarly sized dibond.  I then pried them apart.  The resulting image was then carried over to my easel where I worked into the paint (example 5). 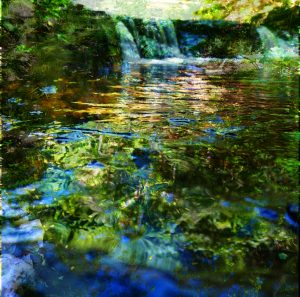 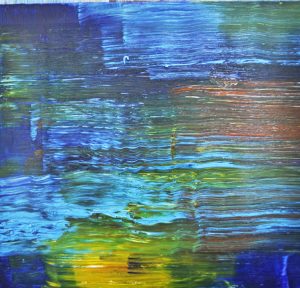 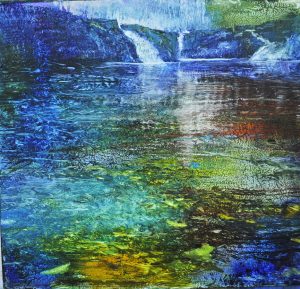 Within example 5 you should be able to discern areas resembling frosted window effects that were the consequence of the transfer pressing.

I omitted illustrating a critical step in the process with the previous examples 3 through 5.  Here is another step by step sequence including the omitted step.  The first step is the preparing a sheet or plate for the transfer process (example 6). The second step represents the image as it appears after the transfer process without reworking with other tools and paint (example 7). The third step represents the image after reworking (example 8).

Example 6. The panel as prepared before the transfer pressing, 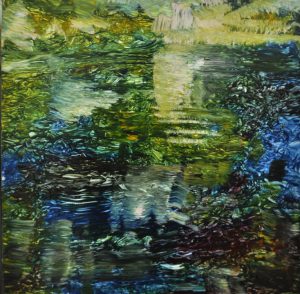 Example 7. The effects of the transfer pressing, 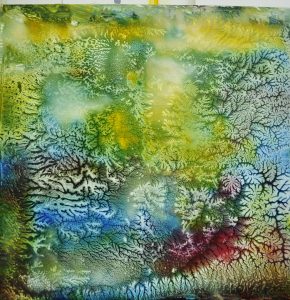 Example 8. The later working into the image. 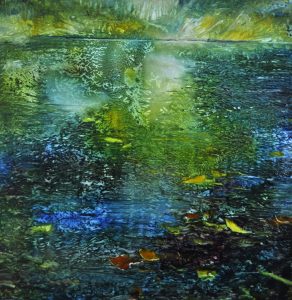 Finally, I moved to larger decalcomania works. The first images were 12×12. These last images are 24×24. They each represent unfinished states. If I do not want to completely erase or obscure the transfer effects I must wait for the paint to dry before applying other layers. They are represented as examples 9 and 10. 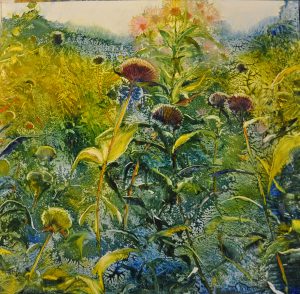 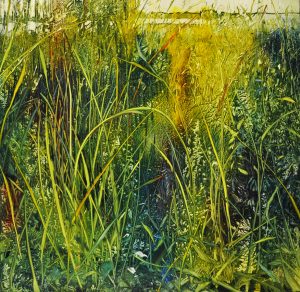