J.M.W. jumps to mind when we think of artists investing motion and energy in rendering architecture. This investment provides an image which suggests more volume, atmosphere, and noise which comes at the expense of stolid measured accuracy. I side with Turner on this choice. It’s better to feel emotion than read information. (Example 1)

Example 1, Lighting in the Piazzetta, 1841, a watercolor (transparent and opaque), 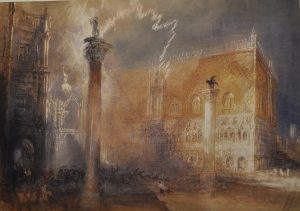 But, there were both predecessors and contemporaries of Turner who made the choice in favor of energized emotion over a landscape of fact.  Velasquez could make an interior space vibrate with vitality. And Piranesi’s prints give impression of building in space and motion. These artists contributed to the notion of painting as a vehicle for the transmutation of an artist’s feelings into paint while surrendering any obligation of literally or statically rendered information.

By the last half of the 19th century artists were employing varieties of techniques to get their landscapes and architecture to vibrate with energy. Van Gogh imposed personal rhythms on his motif as he were a jazz musician riffing on a theme. Cezanne and his cubist descendents constructed their landscapes from overlapping planes of color and light.

By the mid twentieth century abstractly inclined landscape painters like Thiebaud and Diebenkorn took the idea of a flattened field of paint and expressively re-imposed perspective systems so that the painting could read as both an abstract field of shapes and a narrative with special illusions. Their artistic descendents in the 21st century appear in the work of Ben Aronson among others.  Ben took the design precedents of Thiebaud and Diebenkorn and the atmospheric perspective of Turner to create a new sparkling and energized architecture (example 2). 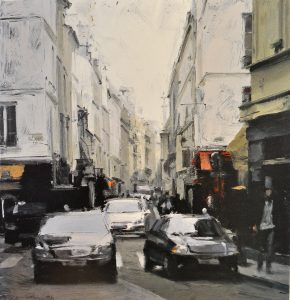 Artists enjoy working through problems; trying different solutions to the same theme. When the theme is architecture the solutions open up to include toying with color, light and geometry. I have been on such quest for a few years. Last year I began experimenting with the dynamic geometric possibilities of the Brooklyn Bridge as well as its ability to generate iconic recognition using abstraction, color contrast theories and atmospheric effects (example 3). Here is a smaller scale example of those works. 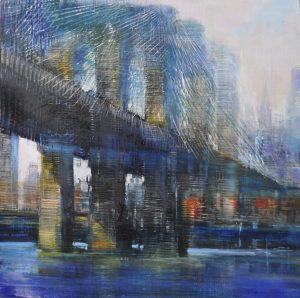 Earlier I had explored the use of a sliding set of focus points along the eye level to create multiple perspectives (example 4 from Milwaukee Bridges). This is more in keeping with how our biological vision works. This had also been an earlier concern of Cezanne’s. 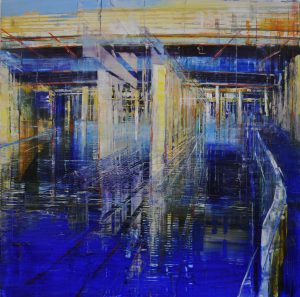 More recently, I have expanded the scale to 48×48” and amped up the feeling of geometric confusion, abstract repetition of shapes and heightened color contrasts as you see in my final example #5 from 2019. 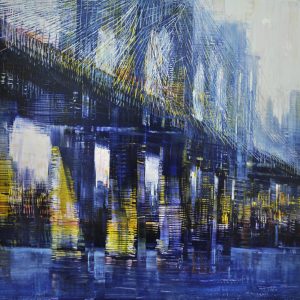