When  Leonardo Da Vinci advised artists to let go of original intentions he had personally learned that an artist’s (writer, gardener, architect) original idea would always fail to anticipate inevitable changing conditions, fail to recognize incomplete visions, and fail to discover new and better opportunities in the course of creating. His conclusion: let go of those illusory intentions, those illusory expectations.

Whether as a spouse or a parent we must let go of our original expectations and follow the flow of personalities and events to sustain  viable relationships. We accept change as essential.

When we write our signature on a bill or check there are always unanticipated variations even though we have done it thousands of times. Because we have a preset expectation we don’t recognize the differences. The hand and materials will always surprise us if we look closely. Da Vinci was advising us to look closely to see what is truly present not the occluded vision of our expectation.

Like Da Vinci, whether we are designing a building, a sculpture, a tune, a garden or a painting we begin with a set of presets, schema from which we will begin and depart.  The more schema with which we have experience the more we can innovate.  Because this takes work beginners and amateurs want emotional short cuts and end up with clichés.

Just as Da Vinci used Flemish portraiture as a schematic base for his early portraits so did landscape painters become familiar with traditions and appropriated them with personal innovations and variations.  Those variations could be motivated by new tools and materials as much as changing client needs for art.

I have previously considered some of the formal schema for landscape painting and its changing form over time. Let’s revisit this sequence beginning before even Pieter Bruegel with the work of an artist known only as the Flemish “artist of the female half lengths”. Here is a landscape of his from 1530-35 of the “Flight into Egypt”, a standard theme (example 1). This form with its serpentine meander into a pale blue distance framed on the left by a biomorphic (trees) mass  (known as a coulisse) was already well developed and would be passed on with variations developed by artists as varied as Pieter Bruegel, Hudson River School painters like Albert Bierstadt, tonalists like George Inness and  impressionists like Claude Monet.

Example 1, Master of the Female Half Lengths: Flight into Egypt 1530. 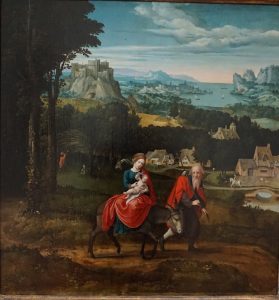 Follow the modifications in the schema as it flows through time and artists. In example 2 you see the form again but, with a mistier atmospheric quality by Albert Bierstadt in 1852. Then in example 3 we have the same form further simplified and even more muted and atmospheric by George Inness in the 1890s and , in example 4 notice how Monet returns to the square with a new harmonious  color palette, also from the 1890s. 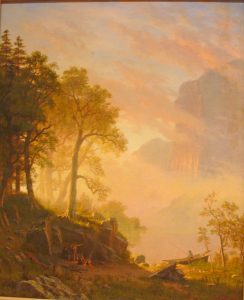 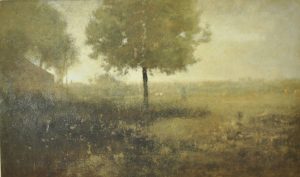 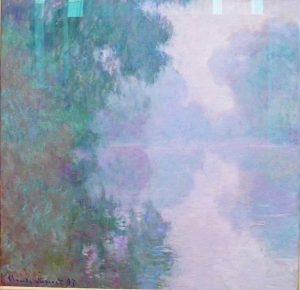 I too will make modifications to this landscape standard schema. As a volunteer trail steward for the Aspetuck Land Trust near me I often find myself  woodlands along streams. I snap many images. I have painted many plein air works here as well.  When referring to my photos as well as plein air painting I recall Da Vinci’s advice of leaving my original expectations to see what is appearing in paint before me. I change course.

For instance, example 5 is a cropped photo (already in the process of re-composition) which will serve as a point of departure for my painting. Example 6 is an early stage in the work which more closely adheres to photographic information. Example 7 departs much further from the photo and has me following a new image that seems to be surfacing in the paint. 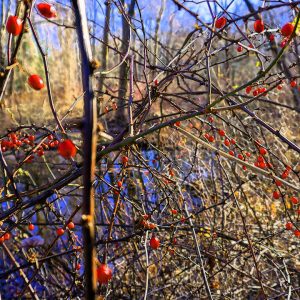 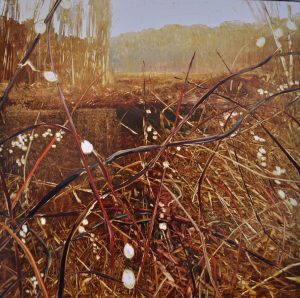 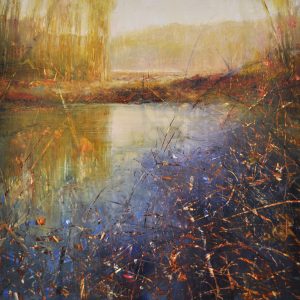 What follows is another small set of examples of a painting releasing itself from its original intentions to become something more potent, simplified and radiant. Example 8 is step one of the process. Example 9 is step two of the process where I chased complementary blue/red color contrasts. Example 10 presents the image in its current state in which I pursued more unified light and a simpler design.

Example 8. Step one of “December’s Meadow and Pool”. 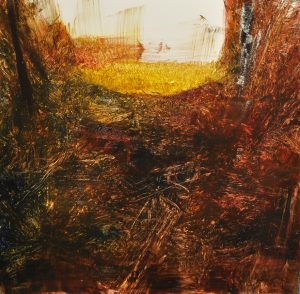 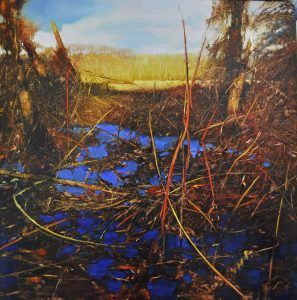