Coats of arms have historically been signifiers, I.D.’s, logos placed on shields, above doorways and high in great halls. We looked up to our ancestors and symbolized them to reinforce our own identity.  I remember my mother painstakingly painting a copy of a family coat of arms.  I noticed these images seemed to float in air rather than be anchored by gravity like a still-life, landscape or abstract painting (usually a premise of gravity here too).

Their shape was rooted in the shape of shields or religious symbols like the oval mandorla of the Eastern Roman Empire. Later decorative arts would borrow these forms, retrofit them and put them in repetitive patterns like wallpaper (see example 1, as a satire of this process). 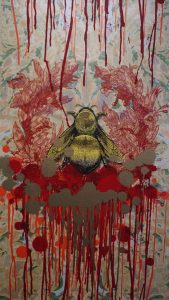 Renaissance designers found utility for the form of the floating coat of arms in marble intarsia, wood inlays, tile mosaics, and painted trompe l’oeil works (example 2). In all these cases the imagery was positioned as if floating in space and usually placed in a position to make us feel as though we were looking up from an obeisant position. 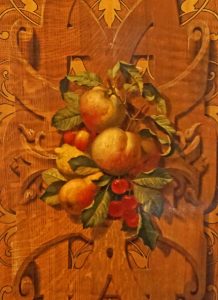 The Mandorla schema could be used to organize decorative paintings like the Dutch still-lifes of the 1600s (example 3). Or, it could be used to shape and revere a royal person or god as it was with the Byzantines. 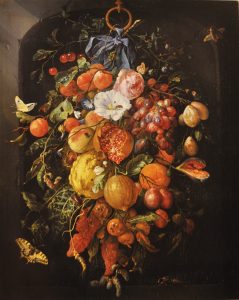 Much earlier Chinese Song dynasty artists of the 12th century found that they could direct our gaze to transcendent metaphysical realms by painting excerpted patches of sky or space holding a few blossoming branches and perhaps a bird, all promises for peace, happiness and good fortune (example 4) as well as representing the endurance of masculine character (plants that survive winter).

Example 4. “Three Friends of the Cold Season”, 1260, work on paper by Zhao Mengjian, 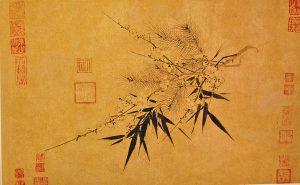 This past January I walked under the loaded orange trees of Seville.  My eyes were directed not toward a horizon but, up to the sky. Like the Song dynasty blossoming bough painting I followed an old Chinese adage, “Where the eye is distracted and the body lingers, stop and pay attention”. I stopped and considered how the imagery floated like celestial bodies in an astronomical setting.

By this point you have already noticed that like the examples I am using compositions of flora and fruit suspended in space.

What follows are the sequential steps of  first painting my demonstration prototype (Example 5, “Airborne”) and later my  steps in making my larger painting “Skyborne” (examples 6,7,and 8). 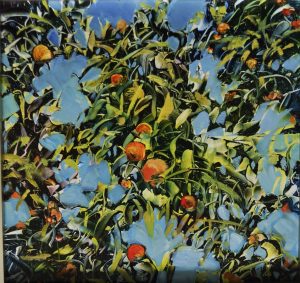 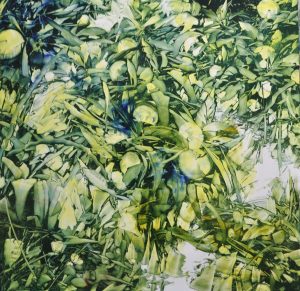 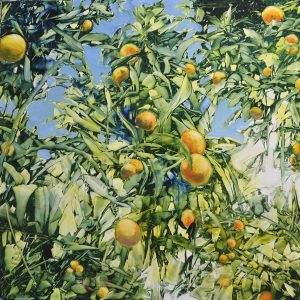 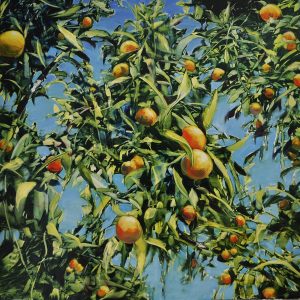 And, join me for the opening of my new exhibition, “Color and Luminance” at Susan Powell Fine Art in Madison, Ct.  Opening reception on Friday May 10 from 5 to 8 pm. 679 Boston Post Road, Madison, CT.