In the 1600’s Gerard De Lairesse wrote of the power of paint to awaken a psychological experience through an expressive painterly gesture. He considered our fascination not with realism but, with the ability of painterly gestures to offer alternate identities between representation and the simple form painted mark. The expressive power of a bravura gesture would find favor with many artists over the next centuries. Constable, Turner, Corot, Monet, Van Gogh, all demonstrate this fascination with ambiguous expressive gestures. They would inspire artists through the 20th century to the present.

By the 20th century artists turned to expressive gesture as a primary motivation not objective representation. For inspiration they looked back to the expressive abstracted studies of artists like John Constable who presented remarkably distilled painterly expressions in his small oil studies from the early 1800s (example 1). 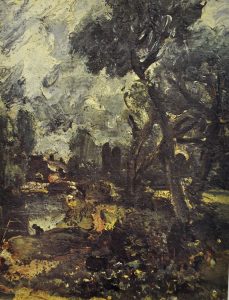 Another group of mid 19th century artists practicing an expressive abstraction of landscapes were the Italian Macchiaioli painters. Giovanni Fattori provides an example with his small 1867 study on wood (example 2).  Like Constable small studies were not intended for public presentation. They were the spontaneous expressions of a moment, freely painted and unconstrained by the biases of public presentation. They were just private studies.

The expressive freedom, design distillation, and raw emotion exhibited in these works would inspire later 20th century artists like Richard Diebenkorn as he too tried small impromptu studies as a starting point for later abstract developments. You can see in this small work from 1957 (example 3). 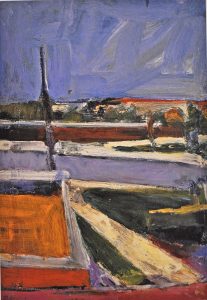 By the 21st century contemporary artists were scaling up the idea of expressive bravura studies into large exhibition paintings. We can see this demonstrated successfully in the work of Alex Kanevsky (example 4) and Eric Aho (example 5). In each we can find the landscape evoked amidst the painterly abstracting gestures. 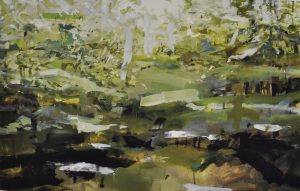 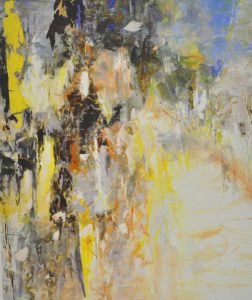 I too find the psychological effects of expressive abstraction from nature to be powerful motivation and emotionally persuasive form of painting. Here are some of my own recent examples.

My process sometimes begins as a reaction to an existing painting with which I have lost interest. Example 6 is a 48×48 landscape beginning which no longer held my attention. I inverted the painting and used it as a substrate for another more freely expressed painting (example 7).  Example 7 represents the second step. This over-painting is also is just a beginning but, more satisfying because I relaxed in my exploration of color and forms while still relying on a familiar landscape form.

Example 6. Step one, a 48×48” this landscape beginning was inverted to serve as the substrate for the next step, 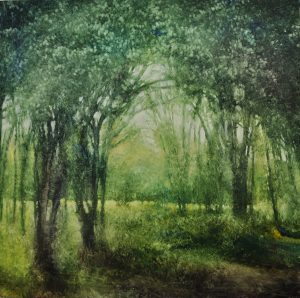 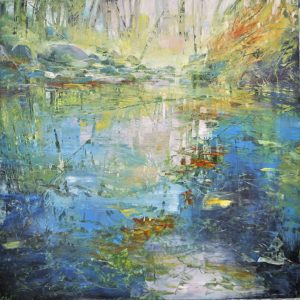 Example 9 begins differently, without a reaction to a pre-existing substrate but, as a simple darkened field of color into which I found and extracted lighter shapes. Example 8 demonstrates the first step. Example 9 presents the current state of the image. I relied of freely expressed gestures and their ability to suggest natural forms.

Example 8. Step one of “Tidewater Marshland” oil on Dibond, 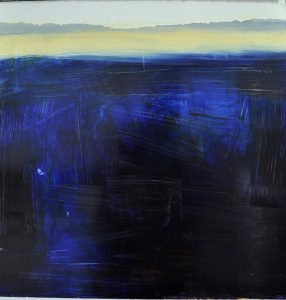 Example 9. Step two and the current state of “Tidewater Marshland,” oil on Dibond.

I invite you to join me for 3 day intensive workshop at the Silvermine School of Art in April.  Registration is open beginning 9 am February first. Call the school at 203 966 6668 ext 2.

I also invite you to my workshop “Explore Spectacular Flowers and Nature” with David Dunlop on Saturday and Sunday , March 23 and 24th at Artsplace in Cheshire, Ct. at www.artsplacecheshirect.org or call Joan or Karen at 203 272 2787.

You may also wish to join me at The Cultural Center at Ponte Vedra Beach in Ponte Vedra Beach, Florida for my workshop “Natural Wonders” May 17, 18, and 19. Demonstrations in watercolor oil, acrylic and mixed media. This is a studio workshop.  Call Sara Bass at 904 280 0614 ext 204 or register at www.ccpvb.org/programs/adult/adult-workshops

For a presentation of “How the Mind’s Eye Works” Join me at the Mark Twain Library in Redding, Ct. on Sunday, February 24th at 3 PM.  Pictures not words came first.  Learn how our greatest innovations derive from visualizing. Learn how you too can use forms of visualization to expand your understanding of complex problems and solve them. Register on line at the Mark Twain Redding Library or, call 203 938 2545