We credit Leonardo da Vinci with introducing the theories of chiaroscuro and S’fumato to painting.  To clarify how chiaroscuro (light against dark) works let’s look at a detail from the dark in da Vinci’s  “Virgin in the Rocks” (example 1).  Here the light flowers pull out of the dark while the fronds are paler and ride under the flowers as they rise out of darkness. In example 2 you can see this patch of flora within the painting.

Example 1.  Detail from da Vinci’s “Virgin of the Rocks”, 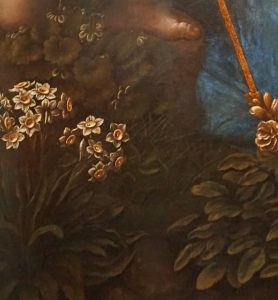 Example 2. The entire painting including frame.

Three hundred years later John Constable will employ the same chiaroscuro principle. The flora advances out of the darker shadows as you can see in example 3, a detail from a larger painting. The brighter areas (the flora) move out of the shadows. They advance toward the viewer while the shadows recede from the viewer.

Example 3. Detail of flora from a John Constable painting. 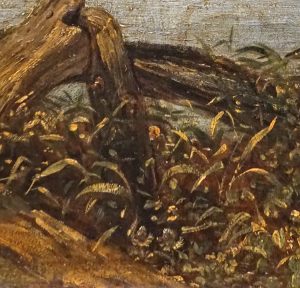 Later in 1880 we find Edward Bannister using alternating bands of dark and light with light bits, like the figure, standing out of the shadows (example 4). 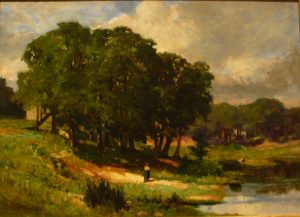 As we turn into the 20th century we find John Singer Sargent using a dark area above to push forward  the light floral area(example 5)..  Again, flowers emerge out of  darkness.  Using Sargent’s example I painted a wild meadow of flowers which proceed from under a receding dark band which runs along the top of the image. I also added a second band of darker foliage along the bottom which is interrupted by breaks of lighter flora (example 6). 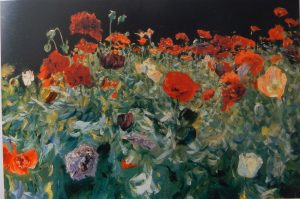 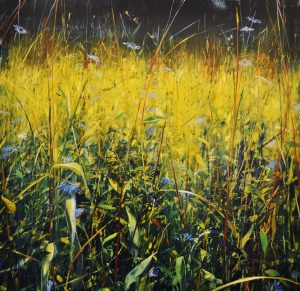 Instead of the light advancing out of the dark I reversed the process in example 7, “Mussels against Sunlight”. Here the dark is pushed forward by the light from behind and above.

Example 7. “Mussels against Sunlight”, the light and dark areas have reversed their position and roles. Here light pushes the dark area forward. 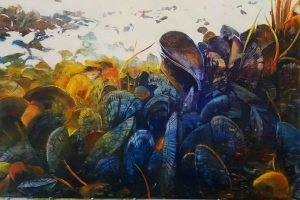 Staying with this idea of placing the light above the dark  to push the dark forward I began this next example 8, “Drifting Reflections”. As you see in this brief step by step series, the light is at the top and in back while the darks are in front and below.

Example 8. Step one, “Drifting Reflections” in its initial phase as an abstraction. 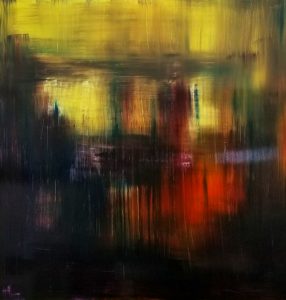 Example 9. Step two, the introduction of textures with orienting textures. 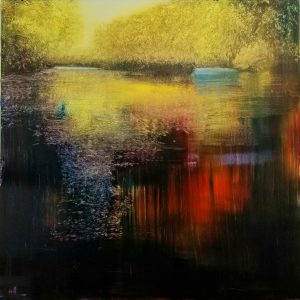 Example 10. Step three, current state of “ Drifting Reflections” 36×36 oil on Dibond.  Here the darks cradle and frame the luminous area in the back. Rembrandt used this structure in several works. 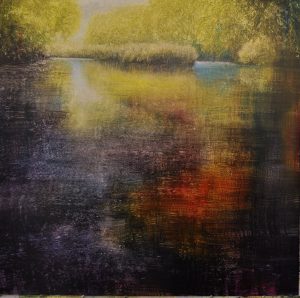 Finally I want to demonstrate how the light can occupy the center of the image and bleed out toward the shadowed perimeter.  Now the  light lays in the center wile the edges hold the dark shadows as you see in examples 11 and 12. In both examples the light emanates from the center providing an oculus of light as demonstrated in 17th century landscapes by Claude Lorrain. But here the light remains on the surface rather than providing a window into deep luminous receding space as you would  find in a traditional Claudian landscape.

Example 11.  “Blue Stream” and oil on brushed silver Dibond, 24×36, with light in the center and shadows in the periphery. 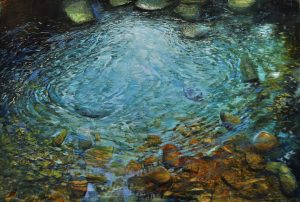 Example 12. “Out from the Shadows” oil on brushed silver Dibond, 24×24, again with light in the center and shadows hugging areas of the periphery. 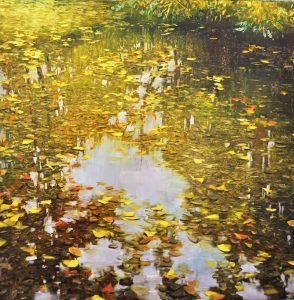 I invite you to join me in my online classes. You can inquire and register at daviddunlop.com  . We start a new series of classes in March (three Tuesdays and three Saturdays beginning March 1st).  I offer live demonstrations, art history, ideas from perceptual psychology, and if you wish I will also personally critique your work using digital drawing tools in a one-on-one c