As soon as Whistler departs Venice in 1880 a young John Singer Sargent arrives. He’s in his mid-twenties. His life has been one of continuous travel. His  mother pushed his artistic development  since earliest childhood so, quick sketches on location are as normal as breakfast to him. His early formal education under the Parisian master, Carolus-Duran stressed  careful observation followed by  a quick and confident rendering.  Duran called this process the  “au premier coup”  while the Italians called it “alla prima”, rendering your painting all at once.  Another  new criteria was to find a slice of life, ordinary life, a principle established by the Barbizon painters and the later impressionists then, quickly sketch in pencil,  watercolor,  and  oil.  The search for an impromptu slice of life was now in the 1880s aided  by the use of photography.  From French Salon painters to amateurs everyone was  relying on the effects, especially the cropping effects resulting from a photograph.  By 1911, Sargent frequently  used photography and observation to help develop his studio oils. He had lots of company from Gustave Moreau to Thomas Eakins.  Example one is a photo from 1911 probably  taken by Sargent of his sister and  friend from the side of a Venetian canal. Example two presents the later oil painting of the same year.  Notice the sister’s gondolier’s posture and the directional lighting.  By 1911 cameras were ubiquitous and easily portable. 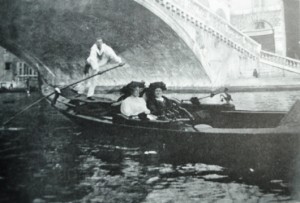 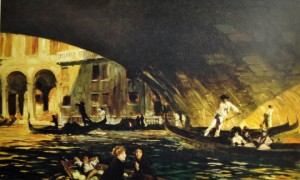 Sargent had many historical examples to pick from when finding subjects in Venice.  He always had a taste for classical architecture populated by figures in motion. He enjoyed the reflective surfaces of pavements and walls.  The reflected light  in Venice was  amplified by its water.  Even in this watercolor (example 3) of  Santa Maria Della Salute, a favorite subject of  artists, we can see the effects of photography. The out  of focus foreground elements (boats and contents) serve as a dark foil to the more clearly focused architecture behind.  This  depth-of-field focal differential is an effect  revealed in photography by controlling the size of the aperture opening .  The smaller the aperture opening the greater the depth-of-field focus on elements throughout.  The larger the aperture the shallower the focus for depth-of -field.  The lens focusing  can also be a determinant.   Sargent’s camera also allows him to play with novel elevations. If he puts the camera down upon (or close to) the level of the pavement he can give us a different point of view as he shows us in this oil painting in example 4.  With photography he can also bring the foreground pavement into focus and the background  can dissolve into mystery.  Notice he uses simple single point perspective here just as Canaletto or Guardi would have done a hundred years earlier.  Also evident here is Sargent’s fascination with  glistening surfaces and chiaroscuro effects of bright spots moving out of darkness , a technique learned  under  Duran and at the Ecole des Beaux Arts.  Another example of photography influencing painting comes in example 5. Notice the foreground triangular prow of the gondola pointing us toward the vanishing point and down the canal under the Bridge of Sighs. Looking through a camera’s viewfinder Sargent would have discovered such helpful compositional devices as  others also discovered them.  You may now reconsider example three and observe how again  he uses the prow of the boat to direct our attention into the picture.  This triangular gondola prow in the foreground proved to be a favored device of Sargent’s. 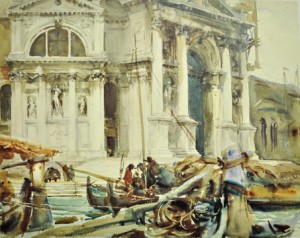 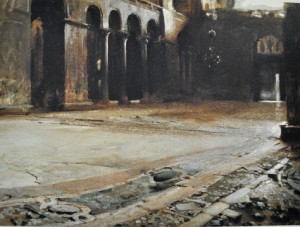 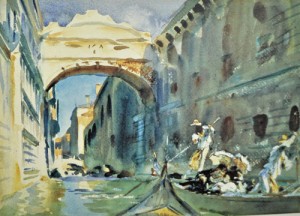 Whether interior  or exterior a textured and luminous pavement  with a distant mysterious atmosphere  were a steady refrain of  Sargent’s .  This view of Venice (example 6)  toward the grand piazza and Santa Maria Della Salute is all foreground  until we travel back to the high misty horizon.  He was aware of his friend Monet’s experiments with colored atmospheres and high horizons  as well  the works of  Turner and Whistler who had explored similar sensations in the same place, Venice.  Here, the  point of view is elevated, probably from a second story or higher window. I  am also  attracted to the effects of  linear perspective, luminous reflective  surfaces and a blurred or misty distance  which  I found  here, in New York . ( example 7). 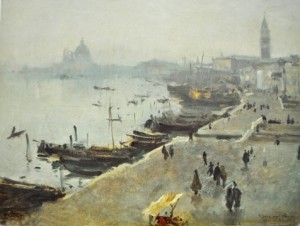 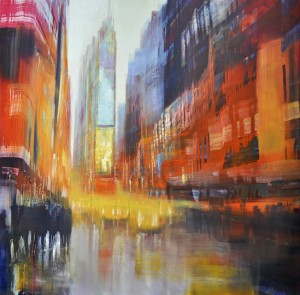 Again, interior or exterior Sargent was attracted to the spacial illusion provided by single point linear perspective.  He animates this space with moving figures. They are generally silhouettes with a vague suggestion for face or hands.  His figures offer  intimacy. They are closer  to us than those of Canaletto or Guardi in the 1700s. They have the feeling of a snapshot, a frozen moment in time which was an aesthetic principle celebrated at the end of the 19th century.  Example 8 is the interior Venetian example.  Example 9 is the exterior example.  Using the same compositional principles as Sargent, I wandered around Flushing Queens, New York and found  strolling figures in contre jour light, the same back lighting that Sargent used.  My examples 10, 11, 12 and 13 show some contemporary variations on Sargent’s themes.   I abstract the figurative and architectural information more than Sargent.   In example 10  moving figures dissolve into the urban distance as they do in example 11. In example  12  I introduce three point perspective  as the  street at first descends then later ascends into the distance.  In example 13  I pursue  further abstraction and image dissolution  from a single point perspective point of view.  If you are interested  in joining me in Venice  the last week of June and taking the pictures Sargent took as well as painting his scenes and those of Turner, Whistler and Canaletto then,  I invite you to call the Silvermine School of Art in New Canaan, Ct at 203 966 6668. 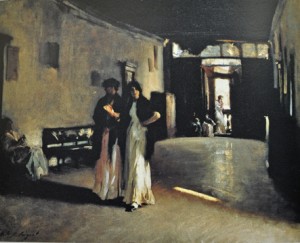 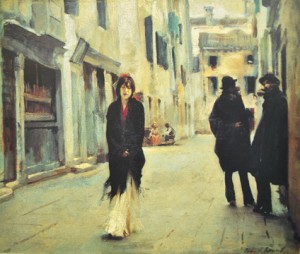 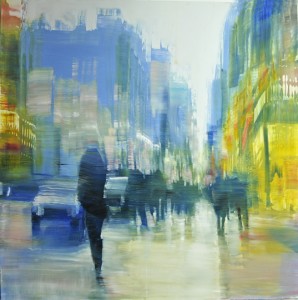 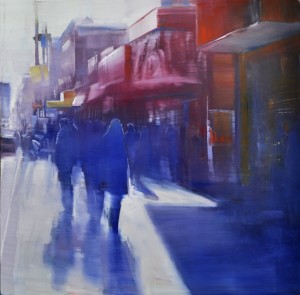 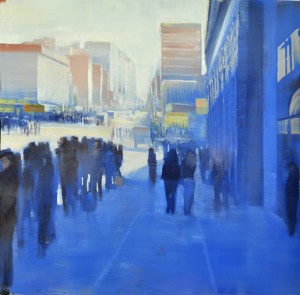 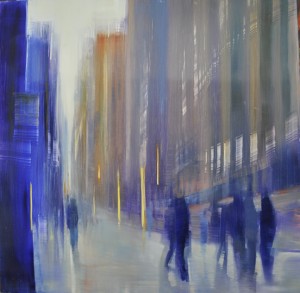