Long ago those calligraphic leaf shapes made with single strokes lured me to look at Chinese porcelain bowls and plates. They were so old and yet so vivid and so lively.  From them I turned to examining 1000 year old Sung Dynasty landscapes in ink on silk. Again the expressive gestures were notable. Single strokes in a symphony of variations suggested trees, leaves, and rocks.  And, the shapes seemed to almost rhyme. They were alive in soft breezes.

There was harmony in movement, harmony in shapes and harmony in patterns. Traveling back to the mid 14th century we find Wang Mien’s painting of a “Fragrant blossoms in snow over a broken bridge”.  Look closely at the branches they may not be just hovering over the water. We may be looking at their reflection as subtly indicated by the broken knotted ink blots signifying sections of the branches as well as those crossing, vaporous horizontal forms. (example 1). 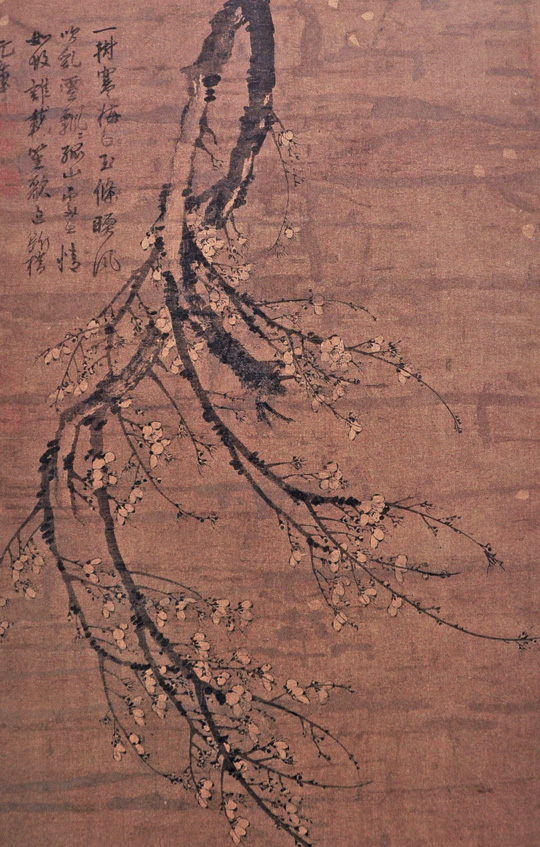 In Li Kan’s “Ink Bamboo” the stalks with their Bamboo leaves flow in  gentle unison crossing other stalks building a sensation of layered space with the overlapping Bamboo. The energy evoked by the bending overlapping Bamboo served as inspiration to me. They don’t generate chaos because of their harmonious patterns each overlapping another. The bending of the stalks in contrary directions balances the work like two intersecting wave patterns.

The experience of intersecting and counterbalancing wave patterns is later used by Japan’s Hiroshige as seen in examples 3 and 4 from the 1830’s and 1840’s. Example 3 provides us with arching patterns of moving water and leaves. The leaves form a design across the image as they fly like birds or butterflies. They travel across the surface of the image uniting the celestial with the earth and sea. Later I use this idea of leaves appearing above and on a surface in my own work.

Example 3. Hiroshige, The Moon over a Waterfall as seen through Leaves, woodblock, 1832,

Hiroshige drapes leaves like a curtain over water in “Bush Clover and Frog” from 1847. The semi submerged frog gives layered translucence to the water area. Here again the leaves feel freely suspended in space. Consider how the leaf curtain interrupts the flow-pattern of the waves.  It locks their motion into the rectangle just as the waves interrupt the falling of the leaves. 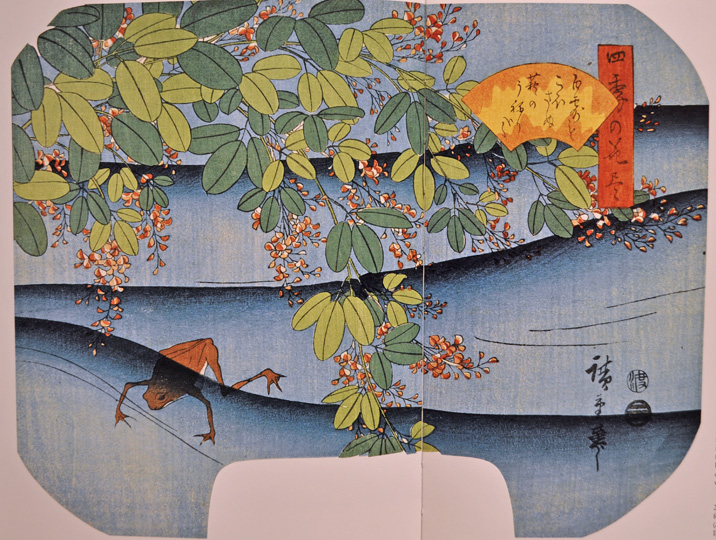 I have three examples using the principles discussed. I have tried to present even greater ambiguity using by deliberately conflating the floating reflections  with floating objects. I began by inverting photographs of trees reflected in water. Now the trees were no longer seen as upside down reflections but rather as vertical stands. This idea gets challenged or undermined by the sense of floating leaves hovering across the surface of the image.  The unity of the image depends on counterpoint crossing patterns, verticals versus horizontals and  other overlapping forms.

Example 5, “Adrift” shows the light of the reflected sky arcing through and across the image.  “Adrift” is 32×32” oil on Dibond, 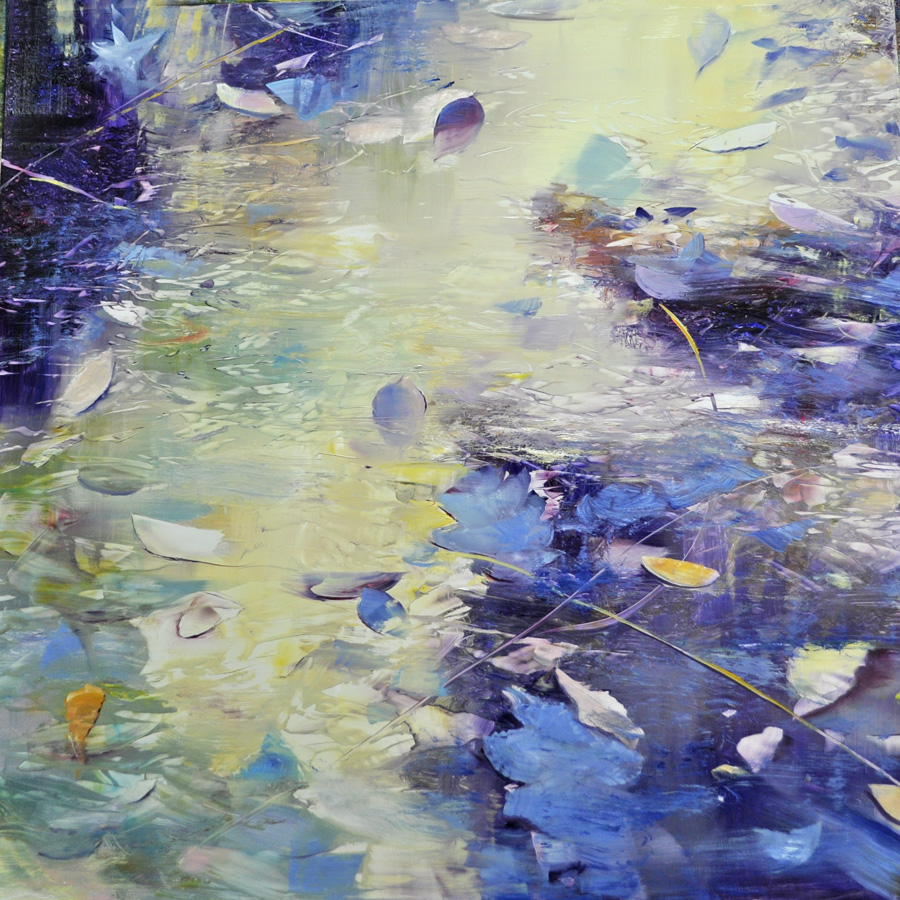 Examples 6 and 7 show the development of “Waterborne/Airborne”.  An image hoping to perplex the viewer with ambiguity. The ambiguity is announced in the title. Are the Leaves floating across the sky perhaps semi-submerged into water. What is on the surface as an object and what is on it as a reflection? 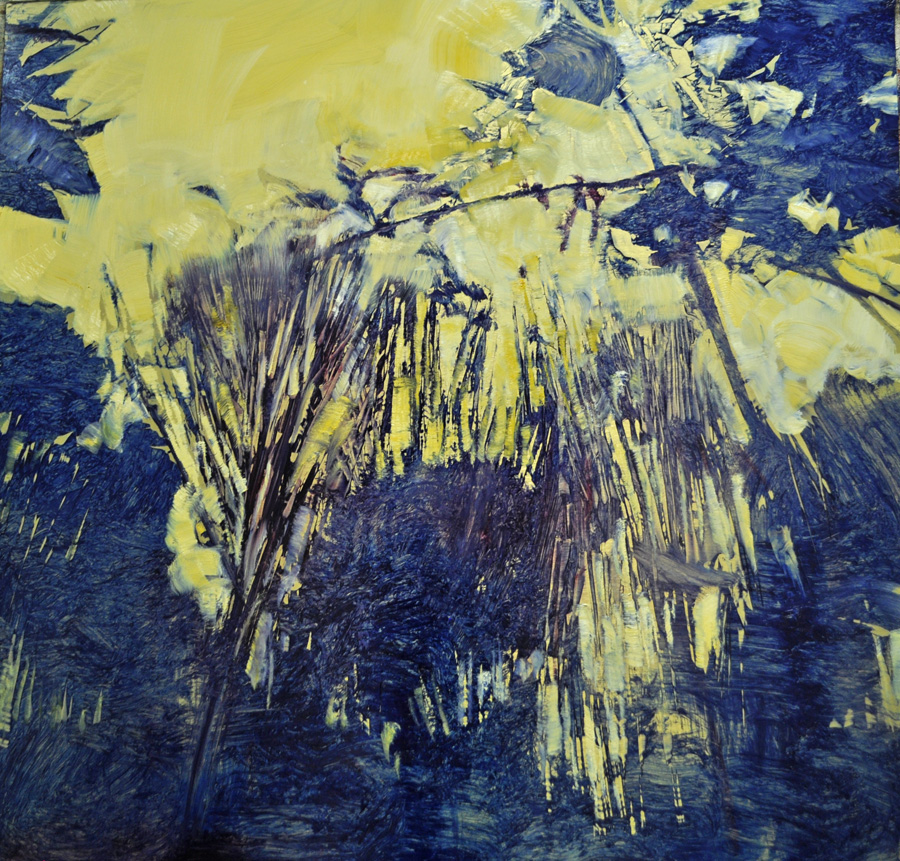 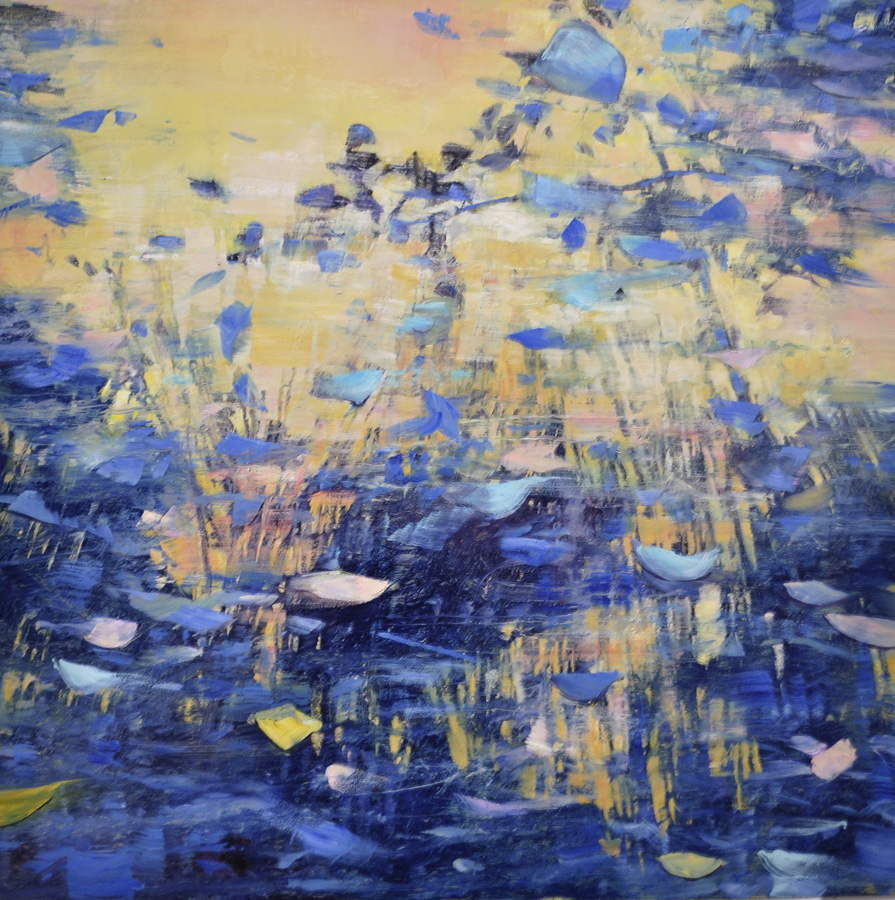 Examples 8, 9, and 10 present three steps in the process of “Leaves Scattered on Reflections”.  Here was an opportunity for me to generate patterns within patterns while again using a yellow/violet simultaneous color contrast harmony. 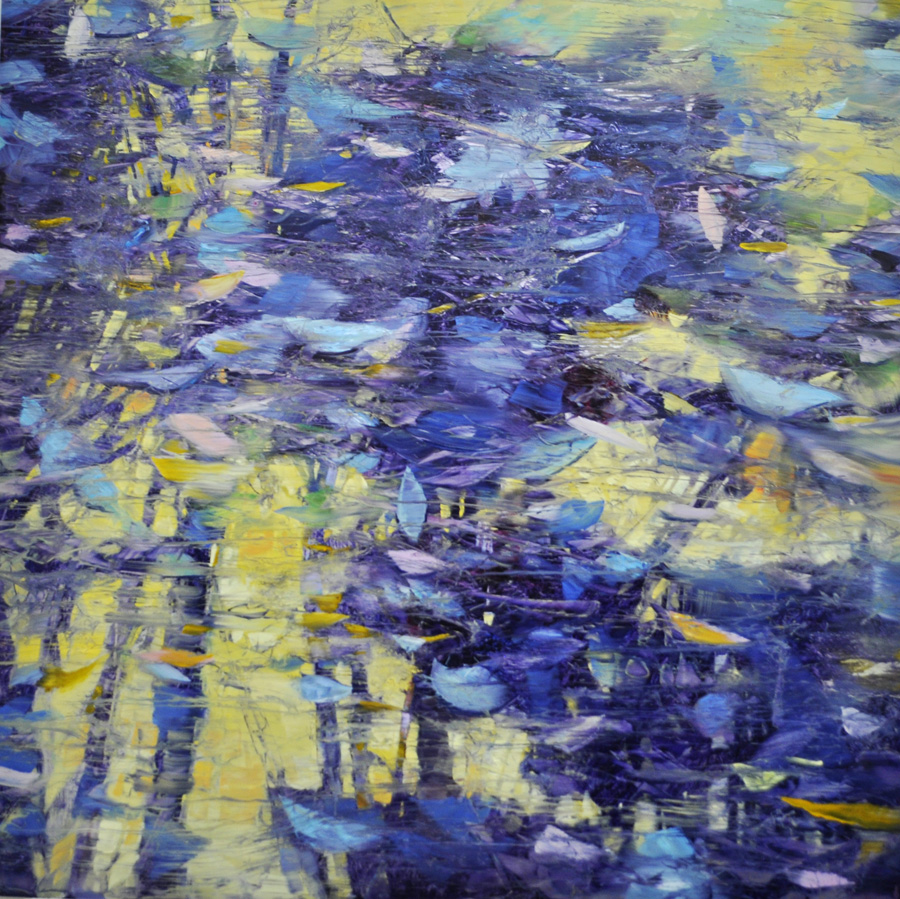 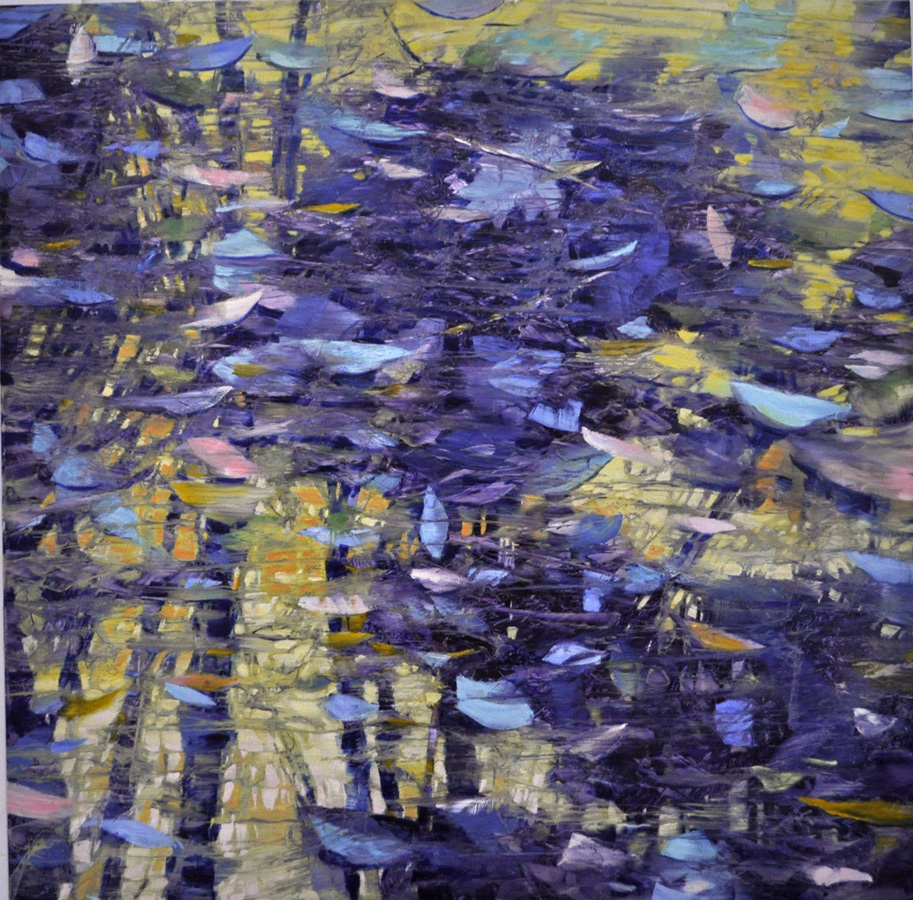 Example 10. “Scattered Leaves on Reflections” step 3, present state. Note how I thread  vertical rectangles of light in a wavy basket-weave to connect the image. Also, notice there is a broken circular pattern of yellow leaves helping to covertly unify the image. 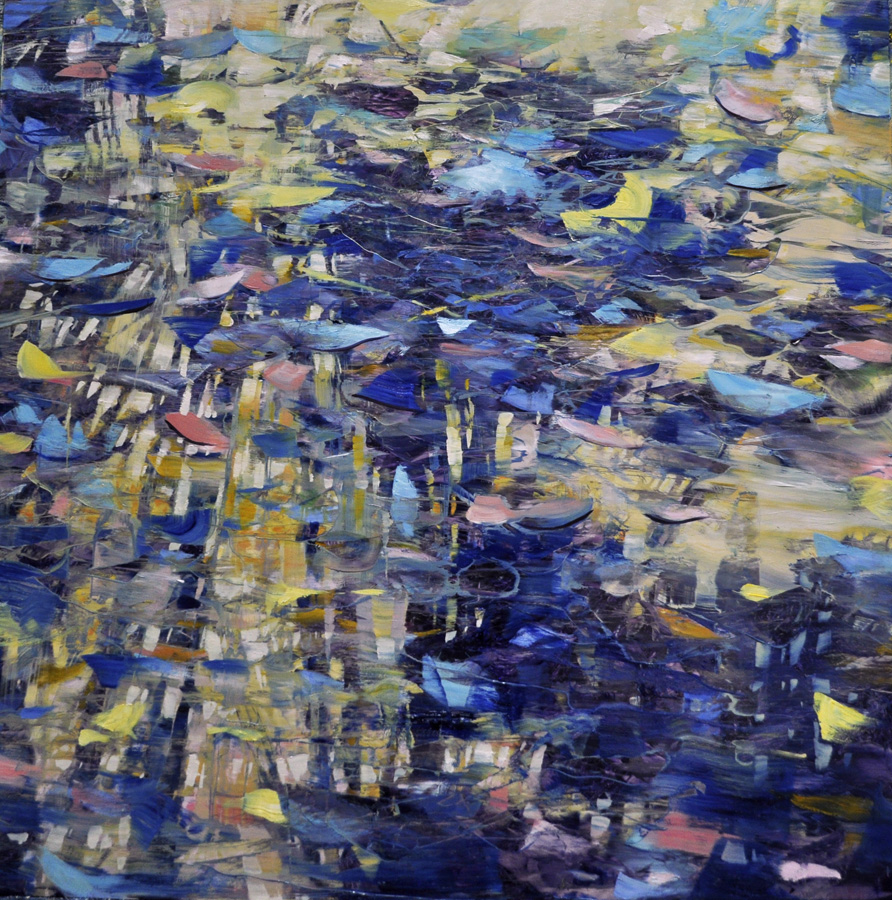