If you and I were to go back to the earliest purposeful distortions of linear perspective we would look at ancient Greece and the construction of the Parthenon. The designers knew that the building could appear longer if the viewer from the front of the temple saw the intervals between the columns get smaller faster than measured regular spacing appeared to provide.

Those designers didn’t know it but, the bower bird had already beaten them to the trick of exaggerated perspective.  By laying stones in a sequence with each stepping stone get bigger instead of smaller as normal linear perspective would do the male bower bird could appear larger than his normal size as he stood at the end of the row of the stones thus appearing larger and more virile to any inquiring female. So clever!!!

From Disney World’s fantasy castles which appear taller because the higher-up windows are made progressively smaller to Marvel comic’s perspective exaggerations we have exaggerated and distorted perspectives.  In example one the lower two designs show the ancient Egyptian use of overlapping forms to create a feeling of simple perspective as well as the Chinese use of parallelograms to give a sensation of receding space.

The top two diagrams illustrate the Renaissance linear perspective system with a single vanishing point on the eye level. Parallel lines run to a  common vanishing point. In the top diagram on the right notice the two green receding squares.  Because the bottom green square occupies three vertical units and the second square occupies only two vertical units the image appears to have a more accelerated feeling of depth. Its two black figures each occupy the same number of vertical units so we experience an orderly feeling of scaled recession.

The top left diagram has two green figures but the further green figure does not diminish in size on the grid and therefore feels larger. This was the bowerbird’s illusion. 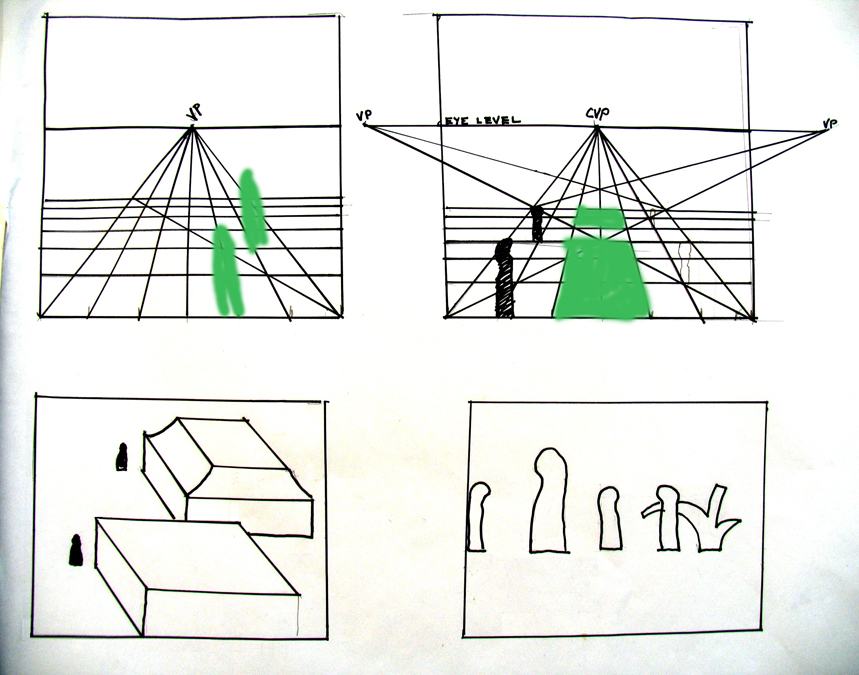 Curvilinear perspective was demonstrated by Leonardo DaVinci. Later other perspective masters like Piranesi would attempt the feat. He was thwarted by trying to include too much of the Coliseum’s information as he tried to unsuccessfully bend the building into a cylinder (example 2). 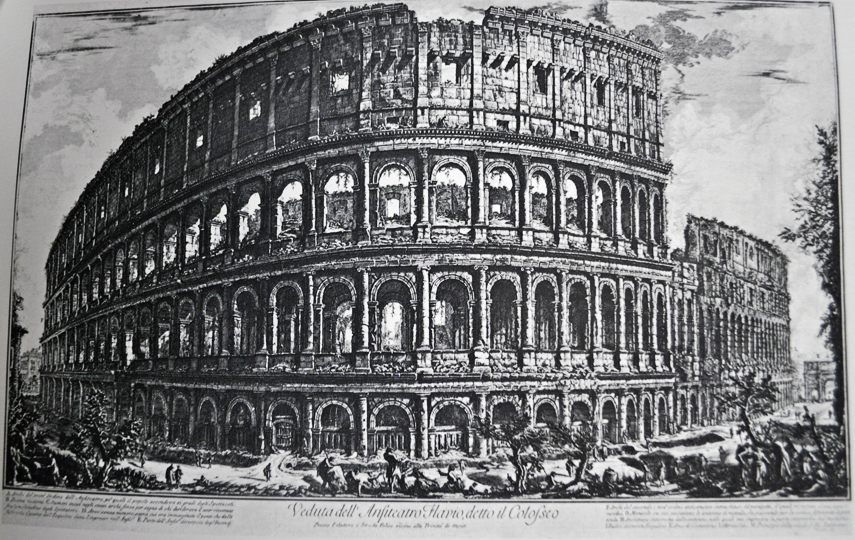 Examples 3 through 6 present two examples of perspective distortion (shape shifting). Examples 3 and 4 show a fantasy or invention of forms leading to the Brooklyn Bridge. Example 4 is a revision of example 3 in which I added more atmospheric ambiguity as well as more  obscuring linear layered patterns to heighten the feeling of perspective. 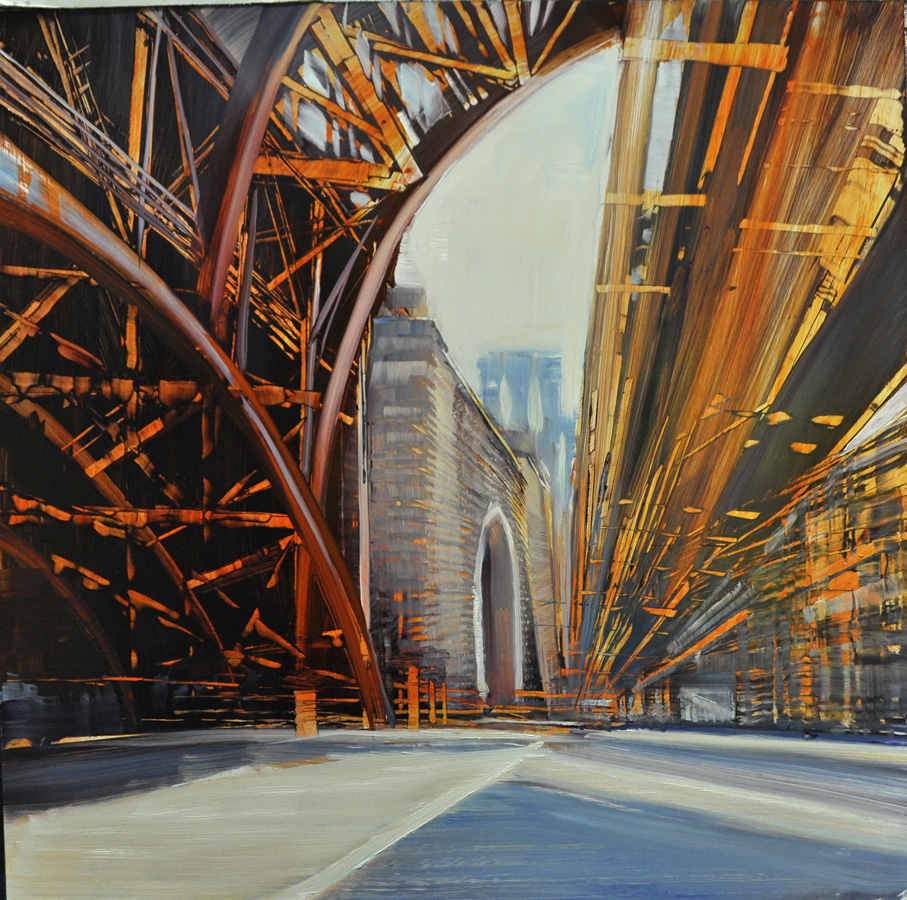 Example 4. Step two, Brooklyn Bridge Work with revisions, Look for the green dot on the eye level. This is the generalized central point of convergence or, vanishing 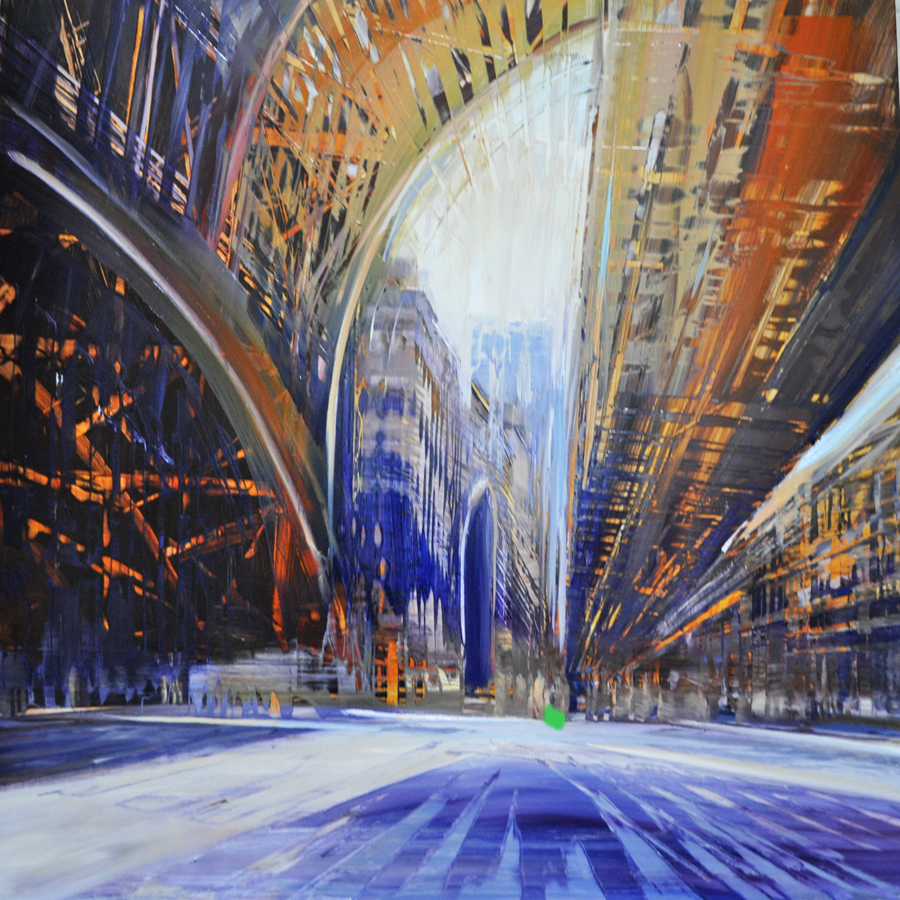 Examples 5 and 6 present a step by step sequence. Example 5 is the substrate, a former painting used here as the substrate to provide textured effects, for the later version seen in Example 6.  Example 6 presents an inverted, elasticlly curved design with roots in a Renaissance linear perspective system as seen in the diagram in example 1.

Example 5. Step one, the substrate, a former city scene. 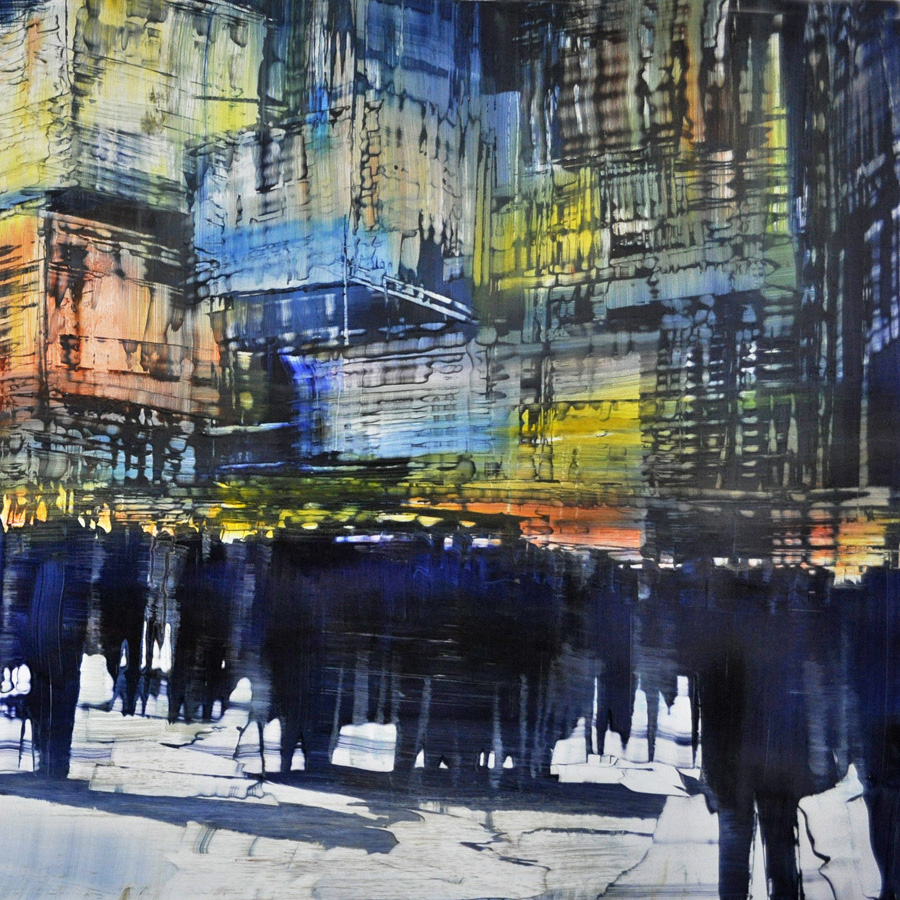 Example 6, Step two, the current convulsed, exaggerated version which overlays the textures seen in step one. 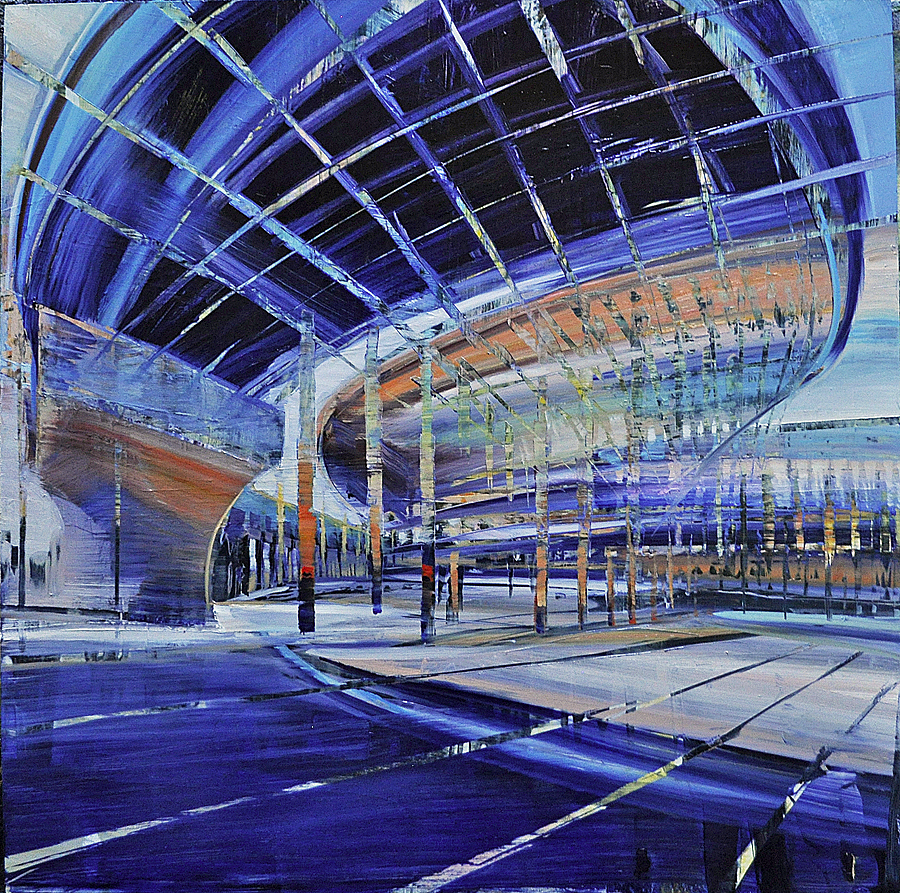 Currently there is a selection of my works up at both the Adam Cave Gallery in Raleigh, NC  as well as the Attic Gallery in Camas, Washington. West Coast or East Coast you can see what I am up to in painting.