Water flow can leave a trace of its previous activity in the earth (Example 1).  Artists find themselves behaving like the earth, observing, capturing and responding to the experience of materials in contact with water. Waterborne or water-buried the relationship between water and matter inspires artists whether it is floating, submerged, negotiating with the flow,  or breaking the surface, acting as a mirror or acting as a lens,.

Example 1. From Philip Ball’s book “Patterns in Nature” is photo of the aftereffects of water moving sand. We see story of the motion in the remaining sand patterns.

I attracted to the movement and shifting appearance of water in its movement around and against matter.  The allure of its reflections, its translucence, the effects of its motion on adjacent matter all inspire me.  Adding the blurr of water’s motion across a surface can invest a painting with more energy. Can make it come alive.

Reflectance and translucence can co-habit the same picture plane and create a magical visual conundrum as you see in this watercolor of Neil Anderson’s from 1983 “Luna Study” (example 2). And, as you can also see here in Neil Welliver’s 1982 watercolor (example 3). 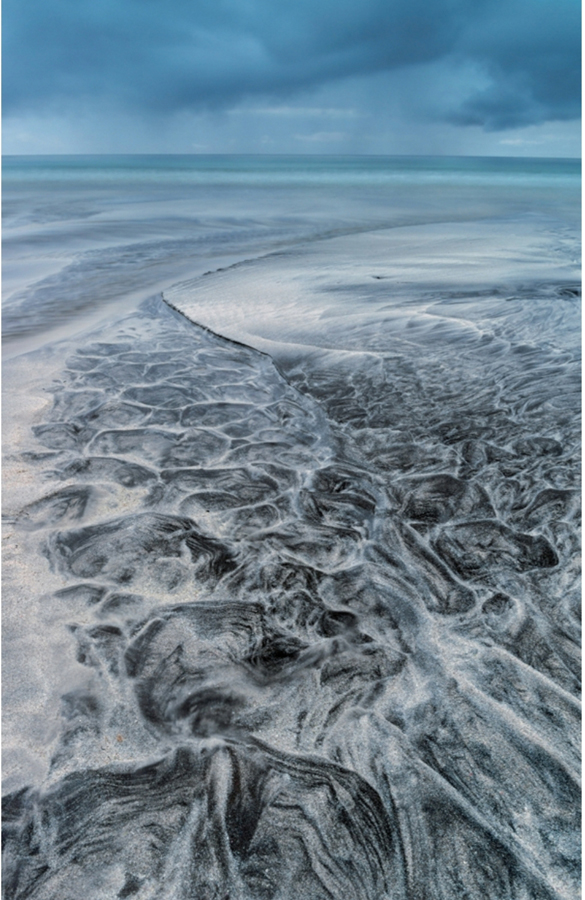 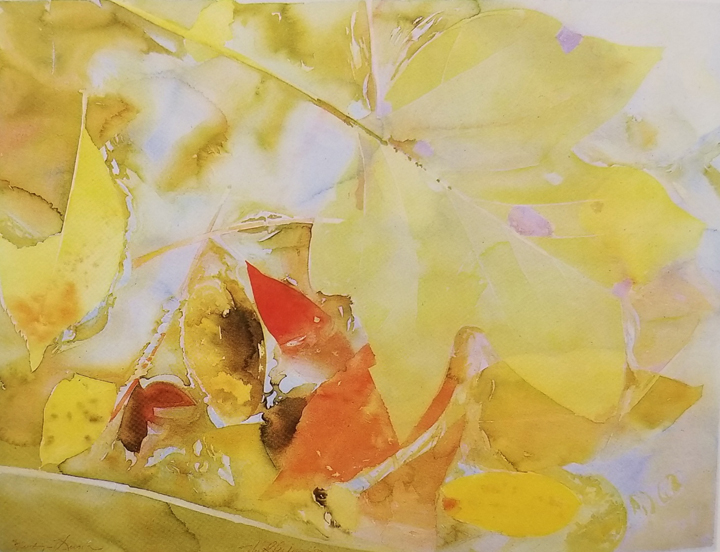 Example 3. Watercolor of trout in a stream by Neil Welliver, 1982. 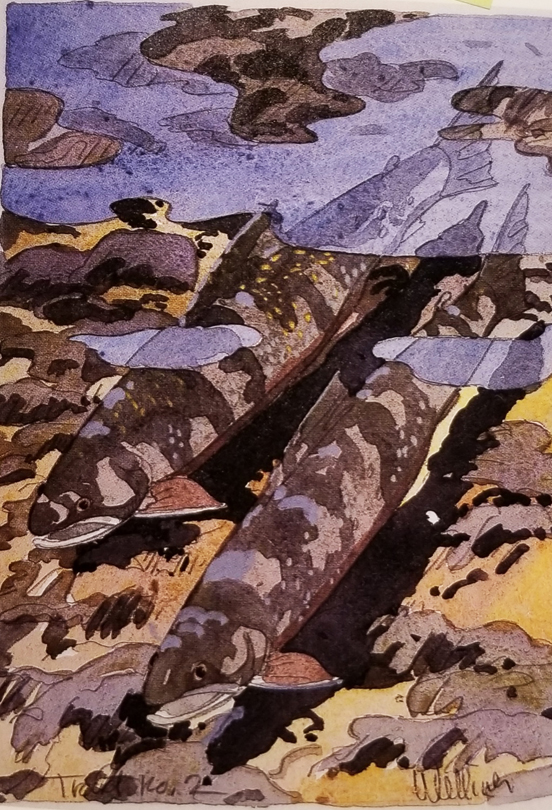 If you were to add a sensation of motion to a similar subject you could begin as I did with a substrate of textures and colors all of which appear to share a common horizontal movement. Blurring evokes the feeling of movement (Example 4).

Example 4. Step one of “Surface Tension”, the substrate with horizontal motion, 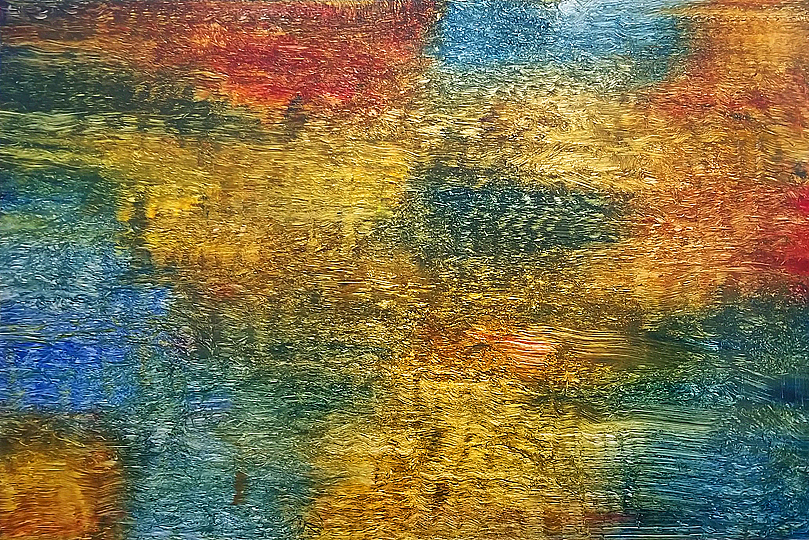 The movement is slowed by the interjection of shapes laying in counterpoint to the horizontal substrate (example 5).  The arrangement of these bits of matter (leaves, stones, twigs) coalesce to create a vague triangle crossing the path of the horizontal flow pattern. In the next example 6 the surface is further blurred over selected areas and, over selected bits of matter.

Example 5. Step two of “Surface Tension”, the introduction of interrupting shapes and a vague triangular composition, 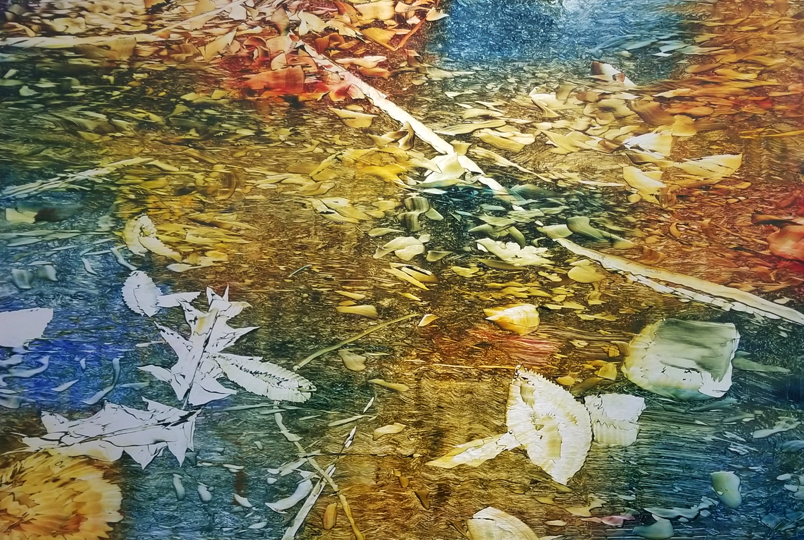 Example 6. Step three of “Surface Tension” after selected blurring to invigorate the work with more motion. The is the present state of the painting, an oil on brushed silver Dibond , 24×36”, 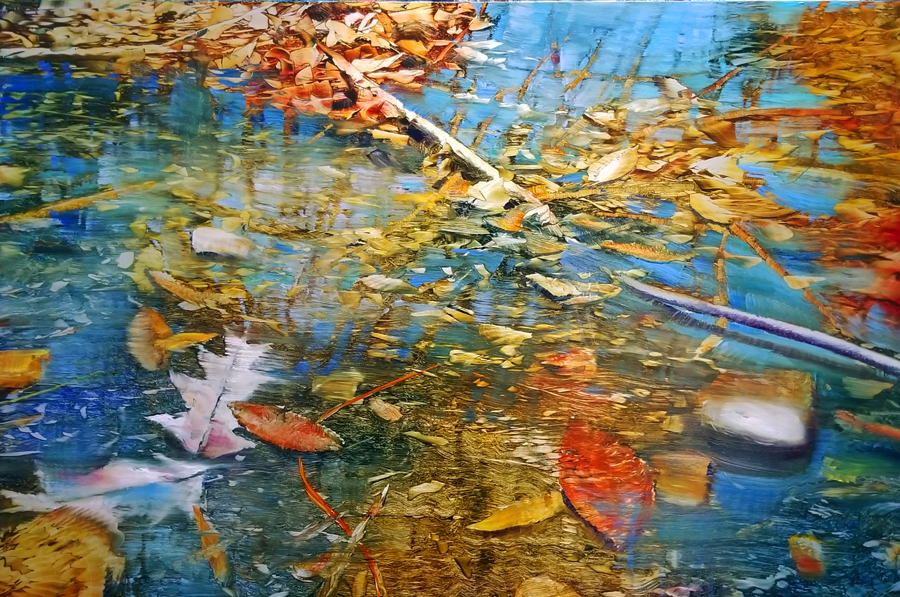