First, let’s not confuse transparency with translucence. A transparent layer is an invisible layer like a clean window pane. A translucent layer offers varying degrees of transparency from barely noticeable to an almost imperceptible thin tint of color. This tinted window can shift the perception of color like a pale pair of sunglasses to a semi-opaque curtain through which we see only a vague ghost lying beneath.

Let’s look a couple of examples of these two different phenomena and, how you can build up these two sensations of translucence. First, consider the thin gel overlay which behaves as though you aimed a subtly colored light onto the painting.  Compare the difference between the two leaves in the lower left corner in example 1 with those same leaves in Example 2. Next, scan the painting to find where golden and yellow glazes were added.  Their purpose was to unify the color of the painting, subdue some of the brighter notes, and give more depth to the water.

Last week I presented example 1 (“Surface Tension”) as my most recent version of the painting.  I planned to add more layers of translucent glaze effects. Example 2 represents that same painting after applying those additional glazes. These glazes were made from translucent colors (non-opaque). During the renaissance many of these colors were referred to “Lake Colors” as in Carmine Lake. We still recognize many translucent colors by the addition of the term “Lake”. 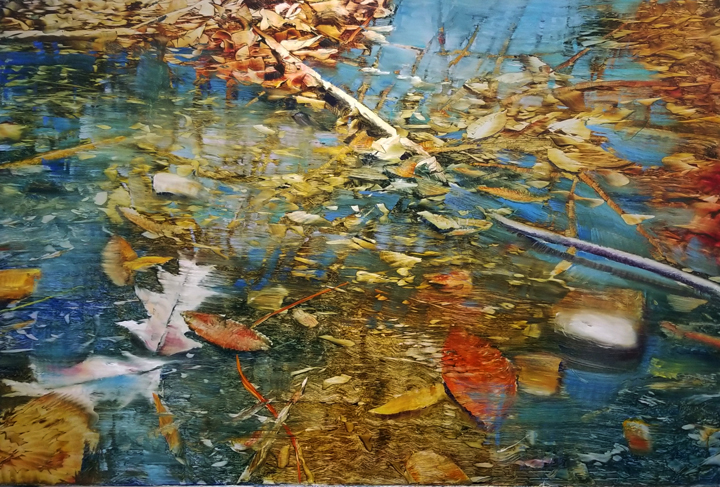 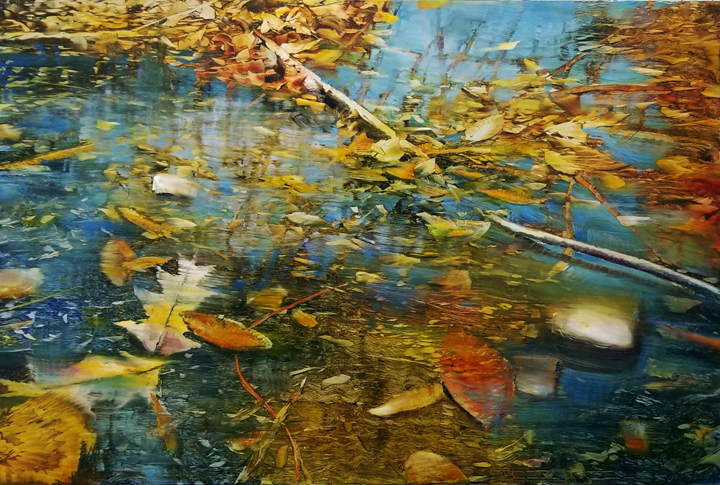 In example 3 I apply overlapping translucent lake colors in the lower half of the painting. In the upper area I use more light opaque tints.  The opaque areas do not contribute here to the illusion of seeing through the watery plane. But, they do increase brightness and provide a stronger feeling of the reflection of the sky (example 3).

The following examples 4 through 10 show the development a different quality of translucence in two different paintings. For a translucent mist effect the paint colors were greatly thinned using refined linseed oil (or, walnut or poppy seed oil) and a small amount of opaque titanium white.  Many artists like to use Zinc white here because of its natural translucence.

Before we get to the opaque translucent mist effects let’s follow the steps showing how each of these two paintings began.

At each of the preliminary stages the paintings offer differing qualities of translucence. In step one of “Blue River Reflections” (example 4) I blurred the substrate. The blurring creates its own sensation of translucence. In step two, (example 5) I created a more granular surface texture and fogged part of it with a semi-opaque lighter blue. In step 3 (example 6) I laid out a more articulated design. In step 4, (example 7) I overlaid the effects seen in example 6 with semi-opaque dustings of lighter colors. This generated an illusion of a surface atmosphere over the water’s reflections. 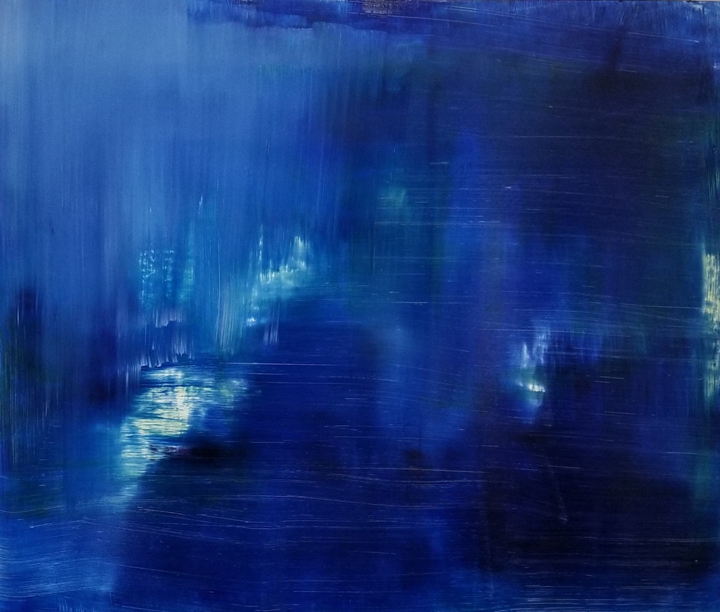 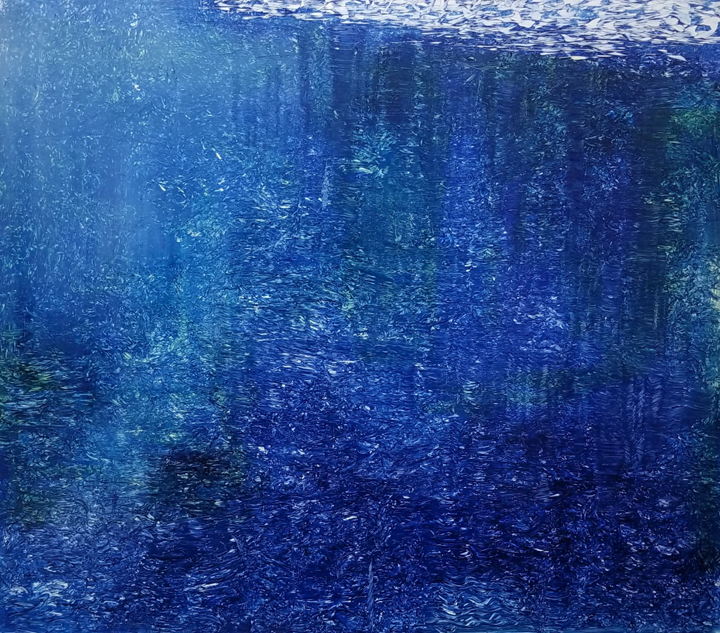 Example 6.  Step 3 of “Blue River Reflections”, the design is laid out in more specific form, 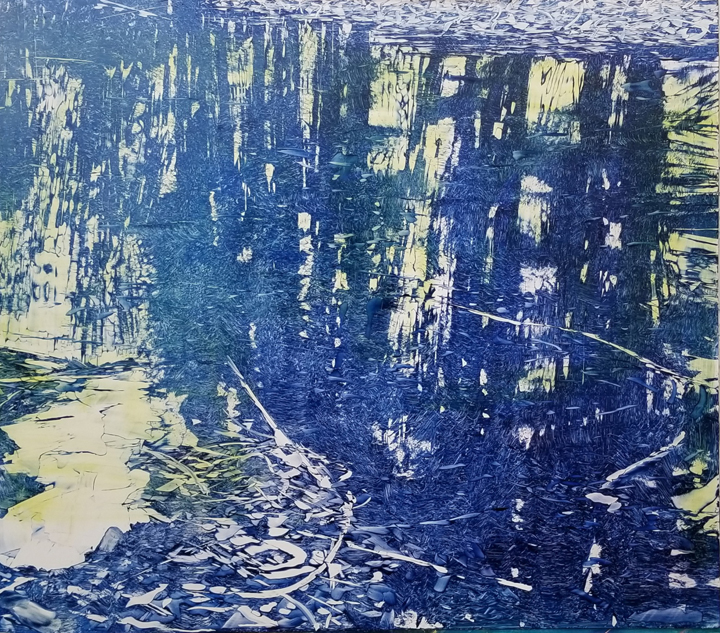 Example 7. Step 4 and current state of “Blue River Reflections” in which semi opaque tints are dusted over parts of the image. 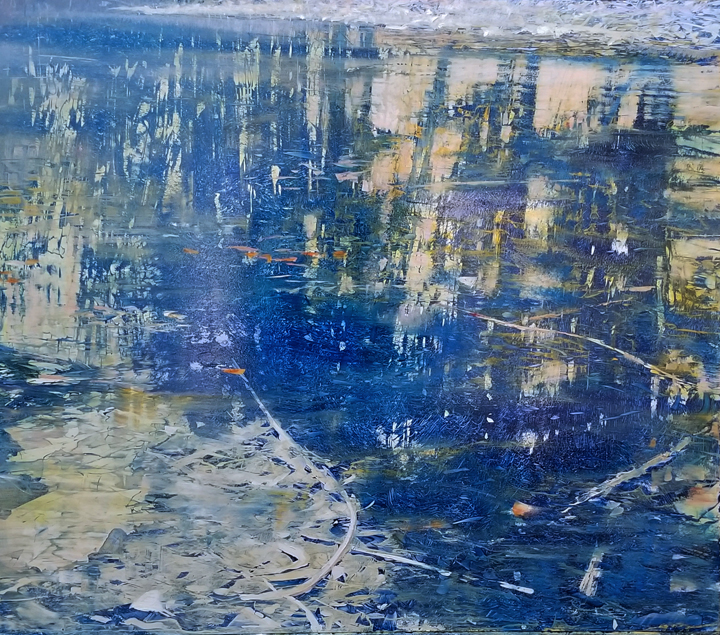 Finally,   in examples 8 through 9 you see “Spring River Reflections” with its cloudy palette of light complementary opaque colors. The painting begins with an under-painting of a primary yellow acrylic ink.  This gets overlaid with a fog of light violet (example 8). The composition is fundamentally presented here. The light violet and light yellow create a soft glow through their contrasting color but, close value relationship.

In example 9 the colors are not altered but, the description of shapes is more developed. 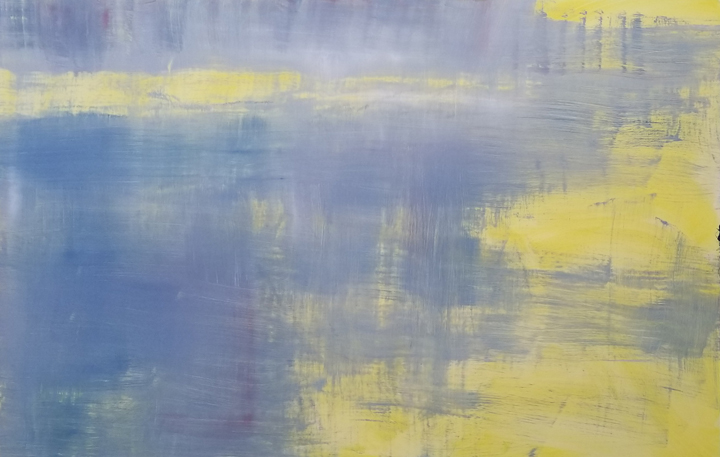 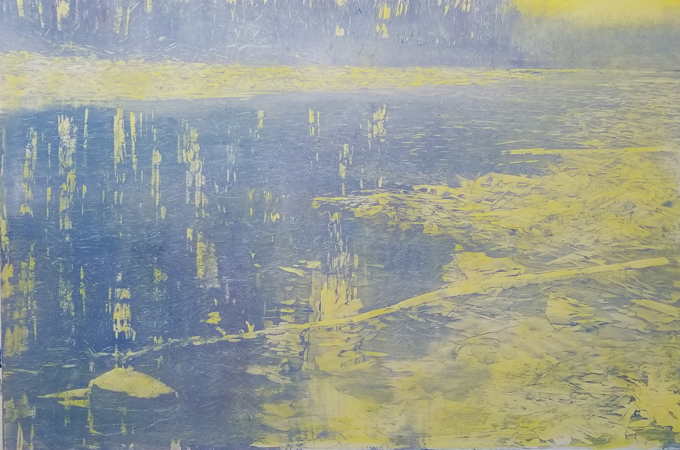 I invite you to join me in a free webinar Zoom class on Wednesday morning at 10 AM… Visit daviddunlop.com for details and to sign up.

I also invite you to join me in my online studio Zoom classes held on Saturday mornings at 11AM. Here I not only offer talk/demonstration but individual painting critiques as well. Visit daviddunlop.com for details.