We have painted with yellow for at least 50,000 years. The evidence lies in ancient caves from Chauvet to Altamira to Lascaux. The meaning of  a color shifts between epochs and cultures, for the great Khans of China yellow was the imperial color (huang), for Cleopatra it was the color of seduction, for Romans it was the color of gold. Their recipe for a yellow gold pigment called orpiment used arsenic. This popular pigment was used reliably through the Renaissance with warnings from Cennino Cennini  in his artist’s handbook (Il Libro dell’ Arte) of 1396 to be careful not to point your brush in your mouth when using this pigment. Yellow has been used in its older Ochre forms since the cave paintings but, a good bright yellow or lemon yellow that lasted was illusive until the 19th century.

Many plants provided a yellow pigment especially saffron and the bark from trees in southeast Asia giving artists gamboge yellow. Indian dairymen fed their cows mango leaves to generate a yellow urine which would be dehydrated into small cakes of Indian yellow.  All three of these yellow pigments are made synthetically today. By the early 19th century chrome yellow was available. A brilliant yellow (which along with Gamboge) was favored by J.M.W. Turner.  Unfortunately, it too proved to be fugitive over time. In the latter half of the 19th century cadmium yellow was introduced allowing vivid autumn paintings by Impressionists.  The power of yellow  lies  in its sensation of brightness. It registers as brighter than any other pigment in our eyes. The after-image color of yellow (color complement) varies between violet and blue depending upon the redness of the yellow therefore, to get a brighter yellow artists have long placed a blue or blue violet next to it which fortifies the effect of both colors.

In my following examples I have landscapes of Autumn. The oldest is  Claude Monet’s forest scene. The yellow notes suggest the reflectance of sunlight on leaves ( example 1). The brightness of the yellow helps to push the darker tree forward. Monet was an early adapter of the new cadmium yellow as was Van Gogh. Next are two American Impressionists, John Henry Twachtman and Ernest Albert, both painting (like me) in Autumn in Connecticut and both rely on the complementary color effects of blue and yellow ( example 2 and 3). The next 20th century use of an October tree is by Georgia O’Keeffe. She also patches in bits of blue to amplify the yellow of her tree (example 4). 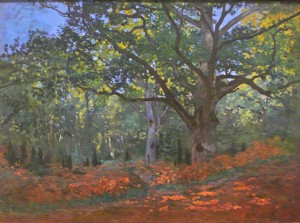 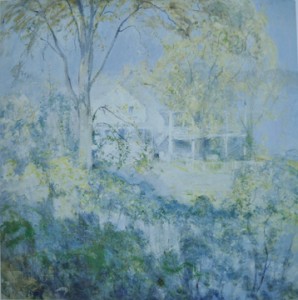 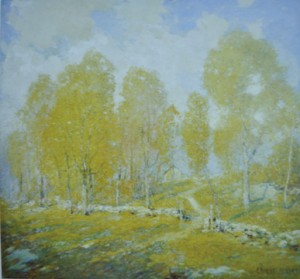 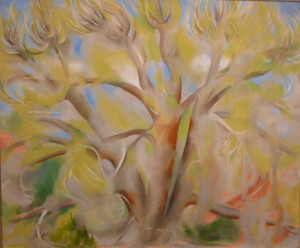 In my next step-by-step presentation  I begin with a photo I snapped this week in a nature preserve (example 5) . As you will see I only use this photo as point of departure for my yellow October painting. Next I start with a blue/brown unfinished shoreline painting which I see has potential as a substrate for an October woodland painting (example 6).  Next, I rotate the painting and begin to match the red/browns on the bottom (example 7). In examples 8 and 9 I continue the painting’s development by  loose applications of  yellows blended into the darker bottom area. I  delete select areas to suggest tree trunks reflecting light. In the last example (10) I continued extending a stone wall in and out of shadow and I continued to model variegated light on the tree trunks.  I further intersperse patterns of sunlight in the upper back area to suggest the presence of a hillside tree line. 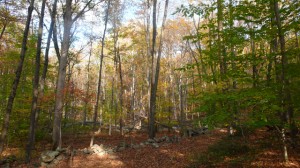 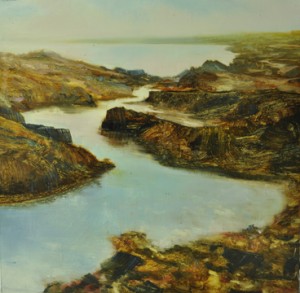 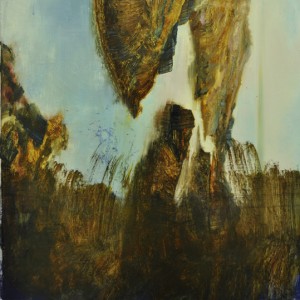 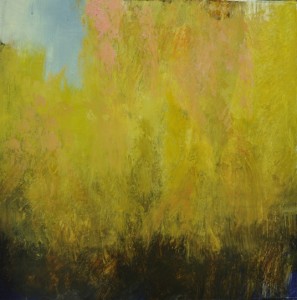 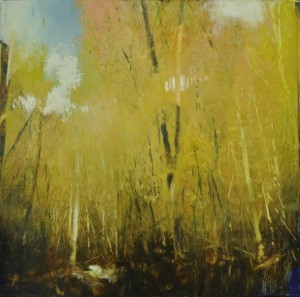 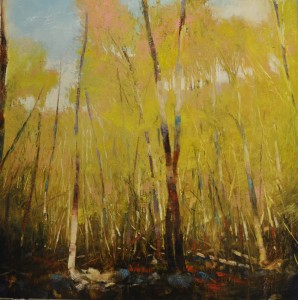