With these thoughts I turn you attention to the painting process of abstraction. I begin with three examples of questing for an abstracted identity using three different landscapes. Let’s begin with the painting as they appear in their current state and then, walk backwards down the trail to see how these works arrived in their present state.

All three works are 24×24 inches (61×61 cm) on enameled laminated aluminum composite. First is “Vital Signs”, Second is “Tidewater Maze” and the third is “Melting into Blue” 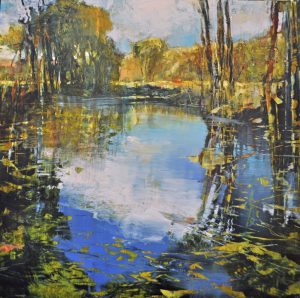 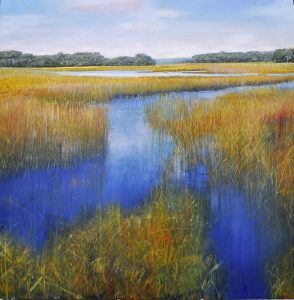 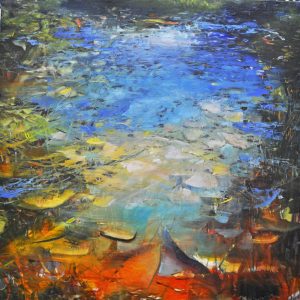 Example one began with me wandering as a volunteer trail steward through “Stonebridge” an Aspetuck Land Trust property.  I take thousands of photos. I come to computer and start recomposing a few of the shots and layering them with other shots.  In recomposing I stick with one foundation shot and layer others over it, reverse it, clone in and out other parts of it, recolor it and more. Here are three examples of how that worked in preparation for “Vital Signs”. In each of these photos you should be able to detect the common denominating image. 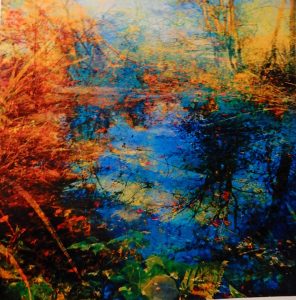 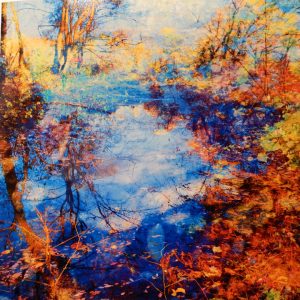 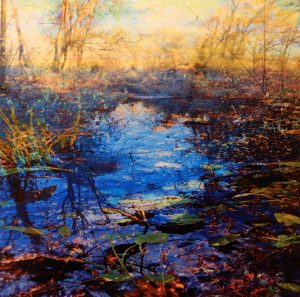 I approached the re-composition of “Tidewater Maze” differently. I spend time hiking through nearby coastal wetlands.  I take photos. I come home and distill imagery through sketches.  Varieties of designs are tested, different horizons are tested but, these sketches and test all rely on one simple compositional shape. In this case the shape was a foreshortened “S” or serpentine. To show the evolution of the expanding watery foreground I will first show you an earlier version and then again show you the current version (examples 7 and 8). 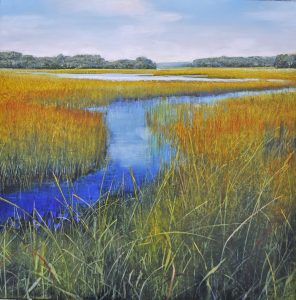 In my third example “Melting into Blue” I have reached for more ambiguity and a stronger suggestion of the metaphysical.  Here I began by overpainting a previous work (example 9) and then using a small vernal pool as my overlaying idea. I excised areas of the overpainting to reveal components of the underpainting.  The image became a hybrid.  Next, I tried several different horizons. I am showing you one of those earlier alternatives here (example 10) which is followed again by “Melting into Blue” (example 11) in its current state

Example 9. The work which would be over-painted and serve as the substrate for “Melting Into Blue”. 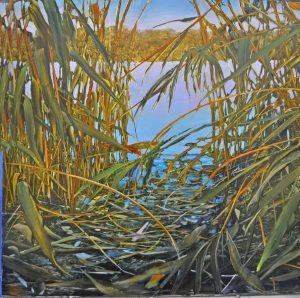 Example 10. One of the earlier versions of “Melting into Blue”, 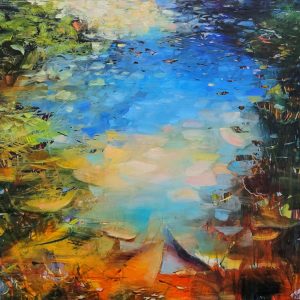 I invite you to join me for online classes upcoming in February (next week). I offer demonstrations, talks on composition, color, brushwork and art history and, if you desire I offer personal critiques of your work using digital drawing tools. You can register at daviddunlop.com on this website.