Our fascination with the feeling of a view of Infinity has an ancient history in visual art.  This is also true of our fascination with our perception of water’s translucence.  But combining these two perceptions into a single image rarely appears in painting. There is handful of examples such as the Baptism of Jesus from Verrocchio’s studio with Leonardo Da Vinci.  But, usually we experience infinity from the water’s edge without a reference to translucence. This is because for us to see through water we need to look down into it and, to experience infinity we need to raise our vision and look to the distance. Translucence and infinity don’t easily co-habit the same picture.

If we turn our clocks back to 1804 we find David Caspar Friedrich giving us a view to foggy infinity from an ocean-side perch (example 1). Moving forward a hundred years we have Winslow Homer giving us a taste of infinity and a feeling of sparkling waves at our feet. We don’t see through these waves but we experience their movement intimately (example 2). We do have a subtle sensation of color below the waves in the soft brown in the extreme foreground. 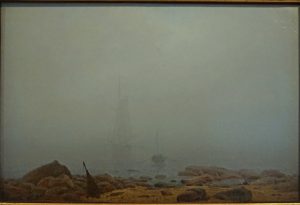 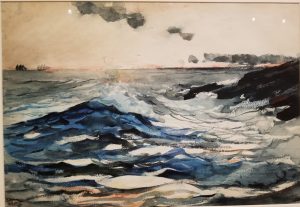 Rolling into 20th century modernism we have Walt Kuhn with his expressive brush work which gives rich, solid, textures to both waves and rocks (example 3). Even with his impasto brush work Kuhn can carry us back to infinity by using bright and close values and, subdued blended brushwork  near the horizon.  Later in the 20th Century David Hockney at last gives us an experience of infinity and translucence within the same frame (example 4).  We see into the pool and through the water as well as the immeasurable distance.  Hockney’s colors lose their saturation and get lighter as they move to the horizon.  The shapes diminish in size. All is in accord with the principles of the perspective of disappearance. 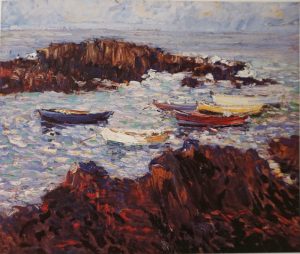 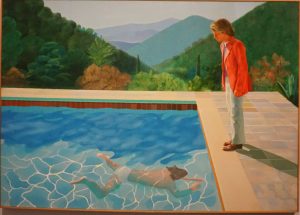 In my example #5 “Oceanside Wandering” you can experience the translucence of the water close to the shore but, as your raise your view to the distance you experience the hazy dissolution of edge information. In the distance everything blends and lightens.

This painting began as a painting which explored the translucence of a large vernal pool (example 6).  This image now serves as the substrate for my shoreline painting. You can still see the evidence of this original work hiding under “Oceanside Wandering”.

Example 5.  Step one, original painting to be over-painted in step two,  an oil on brushed silver Dibond, 24×36”. 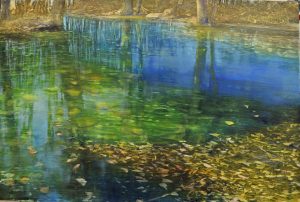 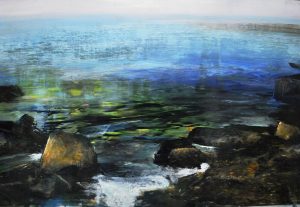 In two previous blogposts I included painting examples which were incomplete. Now, I present those examples in a completed form.  In the blogpost “Pathways to Abstraction” I gave   step by step examples of the development of “Water Music”, a 36×36 inch work on brushed silver Dibond.   Here is the last example from that blog as well as the current state of “Water Music” (examples 7 and 8). 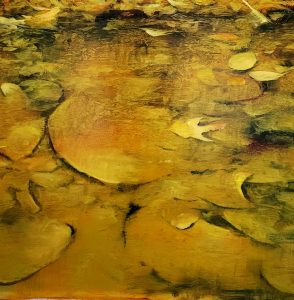 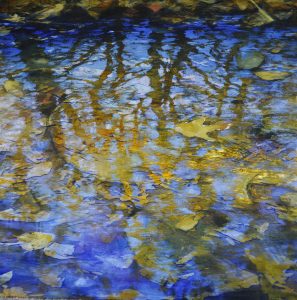 In an earlier blogpost on “Reflections” I gave a series of step by step examples of the development of the painting “Hiding in Plain Sight”.  Here is the last example given then as well as the current state of that painting (examples 9 and 10).

Example 9.   previous example of the work in progress, “Hiding In Plain Sight”, a 36×36 in work on white Dibond. 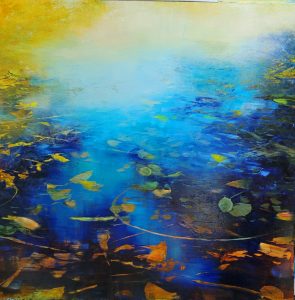 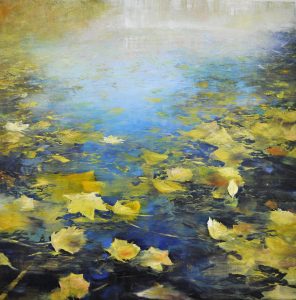