Artists of the 18th century toyed with the imaginative uses of linear perspective.  From Piranesi to Canaletto to Hogarth, artists built believable architectural spaces testing the limits of linear perspective. For example, Piranesi described domes, cylindrical buildings and complex fantasy interiors through drawing. Example one demonstrates how he expanded the interior space of Rome’s antiquities. The ancient basilica of Constantine in the Forum was a model for such fantasy explorations.  MY superimposed green diagonals direct your attention to Piranesi’s central vanishing point See example 1 .

Later in this blog post you will see how I borrow from earlier artists’ perspective experiments. 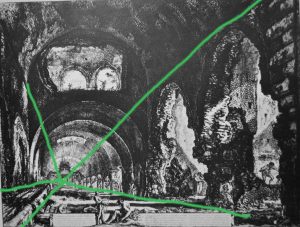 In the same century Canaletto used a camera obscura to describe the architecture of Venice and London.  Example 2 depicts the structure of an arched bridge framing a veiw of London. 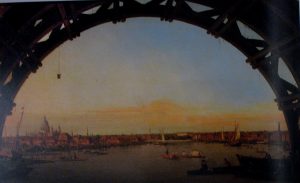 Later Turner would turn to city architecture as a source for perspective inventions. He held the professorship for Perspective at the Royal Academy. Turner’s observed and invented spaces expanded the precedents set by earlier artists (examples 3 and 4). Later contemporary artists like Wayne Thiebaud (example 5) or Julie Mehretu would build upon the tradition with their own inventive explorations trying even greater exaggerations and distortions.

Example 3. Turner explored the architecture of Venice on a grand as well as intimate scale. Here are two watercolor studies. Example 3 presents the archways within a wine shop. 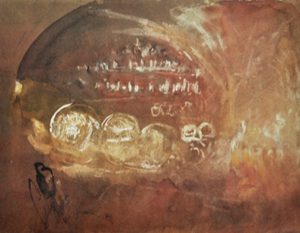 Example 4. Turner explores the diagonals of light, shadow and architecture in Venice in this watercolor study.

You can observe the influence of these examples on my work in the following four examples.  First, I present one of my Brooklyn Bridge paintings using both triangles and arches (example 6).  In example 7 I represent another image of “Approaching the Brooklyn Bridge”. 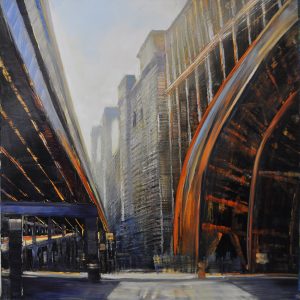 Example 7. Brooklyn Bridge Below, 36×36, oil on Dibond ( revised since last week’s presentation of the image). 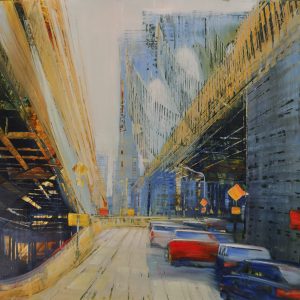 In examples 8 and 9 I offer steps one and two of a bridge work painting. Notice the similarity in step one with Turner’s studies.  In step two I present a more developed stage of the same image.   Like Piranesi and Thiebaud my work is the result of exaggeration, distortion and multiplication of a simpler foundation image.

Example  8. Step one of “Approaching the Brooklyn Bridge” 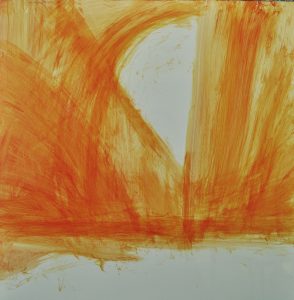 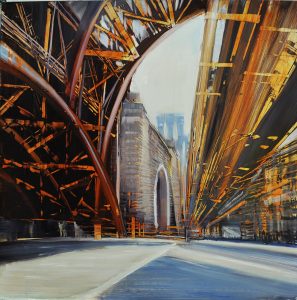 Even when designing natural landscapes I consider the same structural principles. Consider how the image is sub-divided  with an ascending serpentine form (path) on the left and a more straightforward,  level, single-point perspective (river) on the right., The image recedes under  overarching  natural tree forms.

Example 10, “The Trail or the River” oil on Dibond, 24×36, in its present underdeveloped state. 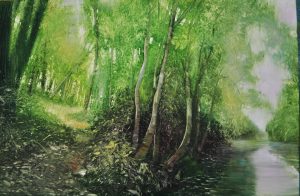