We find meaning in all sounds, smells, touches and sights through pattern recognition. We anticipate, look for and find patterns. Sunlight has provided our visual system with required illumination. It has been the source for our color perception for most of the past 200, 000 years of human history.  We tease out meaning from fractured bits of interrupted sunlight and create a story. As artists with paint we imitate the flat patterns of sunlight.

Creating patterns using learned rhythms, designs, and varied color palettes has brought us thousands of years of emotionally powerful expressions, informative expressions, and curiously enigmatic but organized expressions. We look at nature’s patterns then simplify and re-order them into recognizable and decipherable images.  Sunlight has guided us through most of this activity. We have excelled at deciphering highly camouflaged sunlit patterns such as the photo in example 1.

Example 1, Photo of house and stonewall with sunlight shadow patterns, 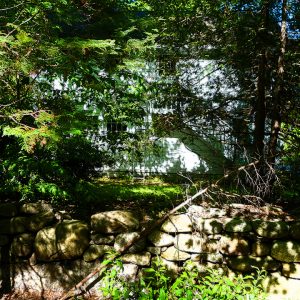 When we encounter highly organized geometric patterns we tend to see the evidence human engineering such as Richard Diebenkorn’s  view from a “Yellow Porch” from the 1960’s (example 2) .  The progressively shrinking rectangles indicate spatial recession to us. Diebenkorn has symbolically colored the area representing water/sky as blue just as he also color coded the buildings and the shadow across the porch.  His imagery has been radically distilled, simplified and abstracted.  A contemporary art-viewer has no trouble reading this pattern.

Examples 3 and 4 present two steps in creating my painting, “Brooklyn Bridge Bound”.  The iconography of the Brooklyn Bridge is partially presented using a geometric vertex which suggests highway ramps and bridges. The patterns of light and dark depend heavily on our ability to recognize patterns sunlight on architectural planes. 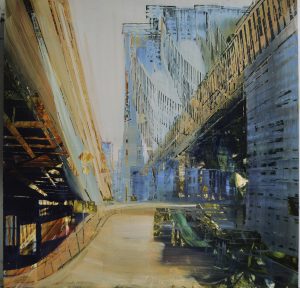 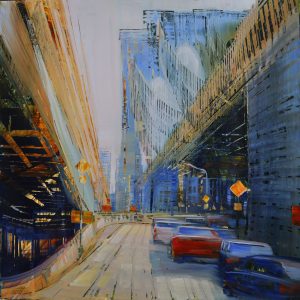 We have internal pictionaries for deciding if a scene is natural flora vs. a cityscape. We read the patterns.   A design which around a luminous oculus with speckled sunlight (lights) suggests trees framing a landscape (example 5). This design of a landscape painting from the early 19th century by John Constable relies on a pattern which was already an accepted formula for hundreds of years.  Note there is a feeling of motion as we circle around the design. 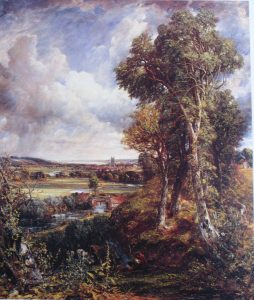 When making preliminary oil sketches on small panels Constable would make simple, flat painted patterns as you see in example 6. 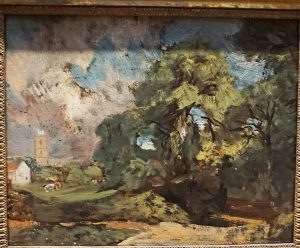 Contemporary artists like Alex Kanevsky also make overt use of organized patterns that loosely suggest reflected sunlight on elements of a wooded landscape. The result is an image which invites our pattern solving skills (example 7). 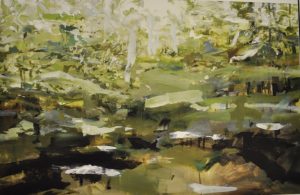 My last example reaches back to the earlier design pattern of John Constable using a distorted luminous oculus as mechanism to lure us into space past the more random patterns of sunlight on leaves. I present both step one and step two of this image.

Example 8.  Step one of Forest Patterns, 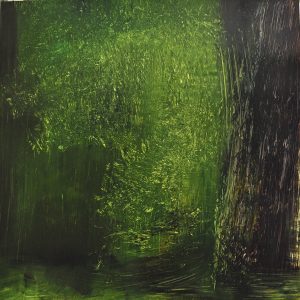 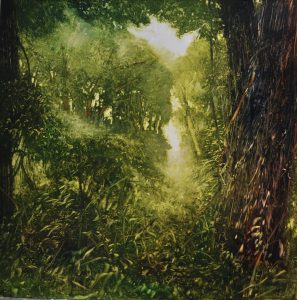