In the 17th Century the Dutch enjoyed a golden age in commerce and art. Rembrandt  contributed importantly to this period.  He explored new ideas in painting and printmaking.  Among his experiments were new compositions for landscapes such as example 1. His experiments would serve as new compositional models for his peers and later artists. 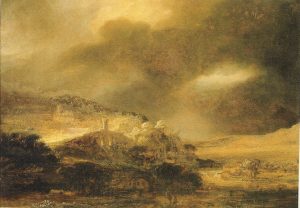 In the first example we find the movement of the sky running in diagonal counterpoint to the landscape. This would evolve into a standard model for Dutch and much later American seascapes. I, myself, borrowed this design when composing as you will see in my examples 2,3, and 4 presenting a sequence of my changes to a photograph.

I begin with a shot of waves on rocks. In example 2 you see how I have radically cropped the image, enlarging only a small section of the photo. In example 3 I reversed the photo,  cropped it further, and adjusted the image to suggest similarities with the Rembrandt landscape.  In example 3 note how the water flows through a crevice in the rock similar to the light piercing the two arches of the bridge in the Rembrandt.  Note how the bridge is vividly backlit just as the white foam of the wave back lights the rock outcropping. 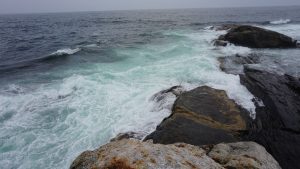 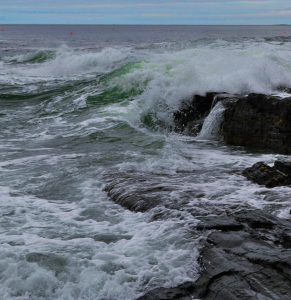 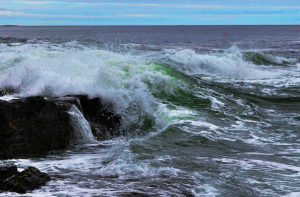 Using the example of light flowing from behind and over-spilling darkened arched rock shapes I painted the seascape in example 5. The surface contours of the sea and its waves  could suggest a rolling landscape. 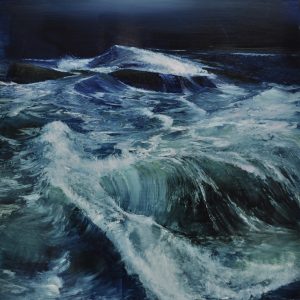 While further pursuing the shoreline motif I found myself back at Pemaquid Point but, further up the shoreline in fog. I again use a downward right sloping design in this image. Here are three steps in building this image.

Example 6. Step one, laying in the image. 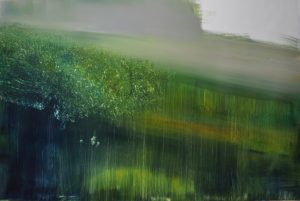 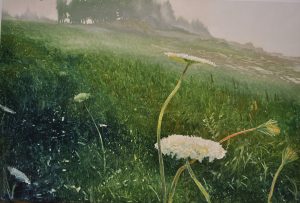 In step 2 the image appeared lopsided on the right with its concentration of large flowers. My remedy was to add more Queen Anne’s lace on the left side but, with different spatial orientations and in counterpoint to the orientation of the flowers on the right side.

Example 8. Step three, the image in its present state. 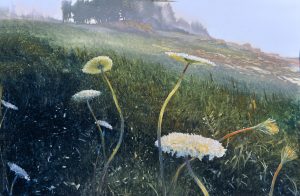