Da Vinci observed problems with linear perspective and hard outlines. We don’t see like that! He saw that natural perspective curves, perhaps as the result of our eye’s convex lens. He further observed that edges were not sharp and hard but got blurrier and softer the farther they were from the center of our vision. He noticed that we scan a scene stopping at hard focus points then continue on.

Contemporary artists of Da Vinci’s time put their figures, flora and buildings inside hard outlines as you see in example 1, by the Spanish artist Blasco de Ganen from 1450.  The figures looked more like paper doll cut-outs rather than 3 dimensional forms.  Following Da Vinci artists tried to give their object/subjects a feeling of more volume and motion by using on blurrier edges. 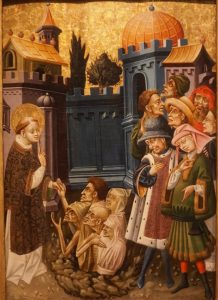 By the time of J.M.W. Turner’s mid years in the 1820’s, 30’s and 40’s he had found the core of a painting’s success lay in its exaggerated  drama and,  that drama depended upon movement and blurring.  Turner’s experiments with watercolors showed how blurring as well as layering translucent forms created a greater sense of motion and space even to a cityscape (example 2). 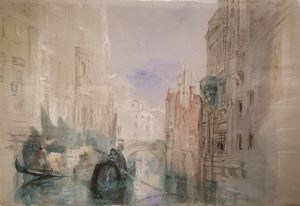 Later in the19th century impressionists like Camille Pissarro were generating motion, space and atmosphere through their impressionistically, vaguely defined subjects (example 3).  Just a few years later at the dawn of the 20th century Picasso and Braque took a lesson from the renaissance, make shapes  with dissolved edges and hard edges (open and closed sides) to createthe simultaneous sensations solidity and motion (example 4). 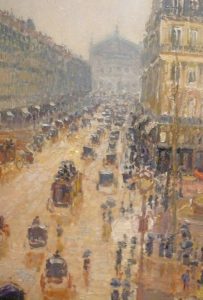 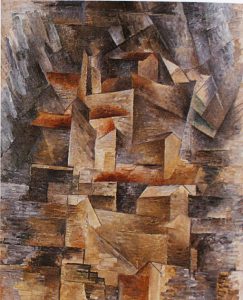 In my previous blogpost I gave you an idea of my working process. I begin blocking in a composition loosely, abstractly, and then harden the information with sharper salient shapes.  Next, I deconstruct this stage to give the image more fluidity, more motion and uncertainty. This process can go back and forth several times vacillating between legibility and uncertainty.

If I want a cityscape to evoke a feeling of the kinetic forces that pulse through the city as well as the feeling of the wandering distracted eye of the witness to city life then I need to find a process capable of that.  My journey took me to fracturing and layering  both the subject matter and the material surface of the painting (known as the facture of the painting).

A contemporary artist I admire, Jennifer Omaitz, unsettles the conventions of perspective as well as plays with the material surface (facture) of her paintings.  In example 5 here, you see how she floats an iconic house form and wraps it with curving ribbons of energy. 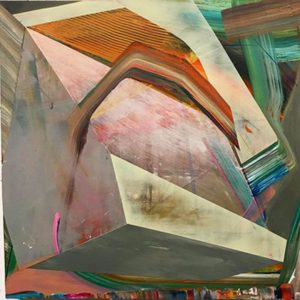 Without canting or distorting the perspective of the picture plane I tried to give a sensation of layered depth to the areas normally associated with flatness like the avenue itself, or the face of the buildings. Here is a sequence of changes as I explored one particular cityscape.

Example 6, step one, the blocking in of the design and foundation colors, 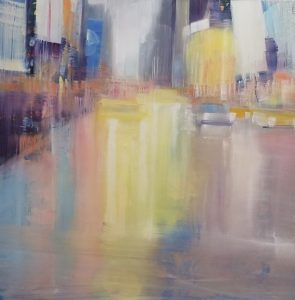 Example 7. Step two, here represents one of a variety of stages (explorations) in the development of this image. There were others before I reached the image you see the next example. 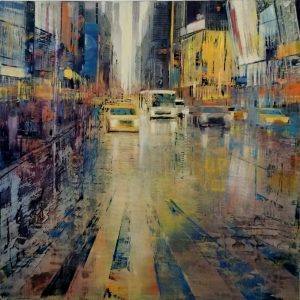 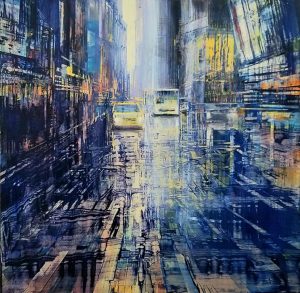 I hope you will be able to join me in my Zoom workshops.  Register or inquire at daviddunlop.com. My next one is Wednesday March 31st at 1 PM ED. The subject is “Signs of Spring”. There will be multiple demonstrations in oils and acrylics.  Or, join me in my April Tuesday and/or Saturday  Zoom workshops with demonstrations and personal critiques if you desire them.  All workshops are recorded and may be viewed at any later date so,  you won’t miss a workshop due to a schedule conflict .  I also hope you can join me for some of my upcoming in person workshops (now that I am vaccinated) in June at the Lyme Artists Association and in August at the Artists Association of Nantucket. Details will become available at daviddunlop.com