Social upheaval and challenges find their way into art. Sometimes they appear heavy handed and unpersuasive as when countless artists tried to depict the horrific experience of 9/11 with ineffective visual pantomimes. An oblique and piercing way to transmute our feelings about the event  at first seemed unattainable. Raw emotion or manipulative nostalgia rarely offer psychological insight. Artists require  time to provide transcendence and a renewed  metaphorical lens as it did for Maya Lin with her remarkable Vietnam War memorial.

I vividly recall terrifying images of shock and horror from journalists covering the Vietnam War. Their power generally lay their shocking effects. They could provoke protests but not offer universal, transcendent and transformative insights as Maya Lin gave us. Art does not work well with  either propagandistic shocks or raw emotional shocks.

Artists like Kathe Kollwitz present universal human passion, longing, and suffering endurance with such subtlety that we look deeply into the work and find ourselves  within it. The social realism of Diego Rivera (example1) invites us to share a human experience with a peasant struggling to lift his burden of flowers and, we discover solace and affection offered by the woman helping him to rise under his burden. We are both the woman and man. 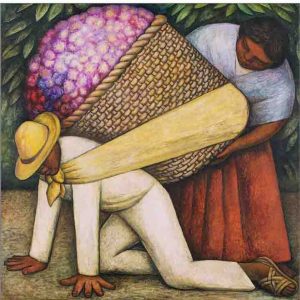 Other artists, like Anselm Kiefer (example 2) give us human pathos but without figures in his large paintings and sculptures which reference  places of trial and terror. Their potency is amplified by the absence of figures. We imagine the story. 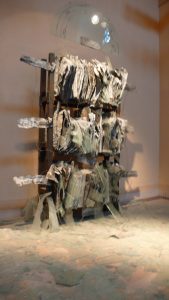 An artist can also reference the canon of art history to reconsider the tortured events of their time as you see in this still from a video by Zimbabwe artist Kudazanai Chiurai (example 3).  He used Da Vinci’s last supper as a format to present grotesqueries of the human condition.  So much power, authority and vulnerability are cast into this familiar context. 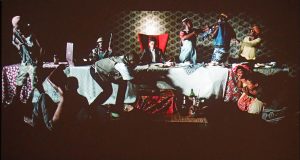 As I have heard rising hate speech and seen examples of the violence of poisoned minds I wondered about my personal response. How do cast a moment of vulnerability and offer any sign of hope? My image here arose subliminally as a result of an unfolding process. It was not an intentional effort.  I merely discovered two female figures sharing an umbrella moving through a city alone but, the city itself seemed to make a way for them, help them find a safe passage. (Example 4). 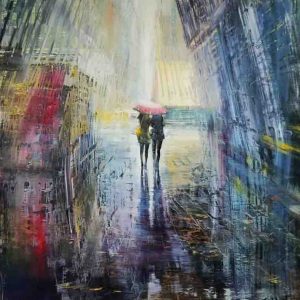 When I use intention to release my concerns the results are usually cloying or, too literal. I need the image to arrive without  overt intention and then, I discover it after its completion or while the work is in process. In “Grand Central Station, Blue Terminal” (example 5). I have a protagonist walking alone, away from us. Is she exploring?  Is she hurrying? Is she vulnerable? Her emotional state is a proxy for whatever yours is.  The beholder reads the scene and writes their own play. 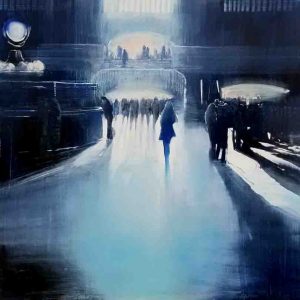 This week I am giving a set of demonstrations on “Garden Mysteries” this Wednesday at 1PM EDT. I invite you to join me. You can learn more and register at daviddunlop.com