Nature offers us myriad harmonized and ordered patterns.  Courtesy of their DNA plants leaf in repeated patterns (example 1). Crystals reconstruct their patterns as they grow. The arrangement of fish scales vary subtly across their repeated lines. You know I could go on like this for pages but, the point is made.

Example 1. Fibonacci number series found in a cauliflower and a rose.

In addition to nature’s rhythmic rhyming of forms our brain searches for recognizable patterns and finds them by accident or intention. We look for connections; we look for patterns; we look for causation. And, when none are present we superimpose an order, connections, patterns, causation. In the absence of evidence we manufacture it to support our biased perceived order, to support our conclusions about what we are seeing, hearing, touching or smelling. We organize chaos into meaning. We delight in discovering patterns in a field of chaos because that discovery creates meaning, order, and  purpose.

As I wander along stream beds, or waves moving upon a shore I find patterns. I find coherent designs. I reorganize my sensations are converted into meaningful unified designs glued together with interlocking and overlapping patterns. When John Singer Sargent walks along the shore in 1878 (example2).  He arranges an ordered pattern for the clouds, for the groups of people, for the blue reflecting puddles of wet sand. We sense this order but, it is not too heavy handed to give a feeling of unnaturally superimposed order. 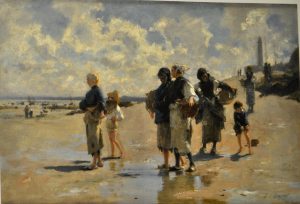 And when I look into the shallows of a stony stream bed (example 3) I find arrangements of reflected light on submerged rocks. I find arrangements of sparkling reflections, and arrangements of rippling water patterns. I willfully re-arrange these components into a unified design pattern. That pattern will have echoes with past art historical patterns. It should offer coherence through flawed symmetries. It should feel unified but, not  an unnatural or forced.  Overt repetitions arouse suspicion and do not enhance the feeling of natural discovery. 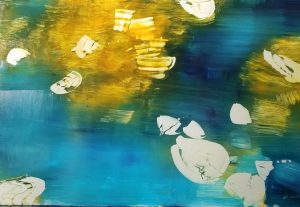 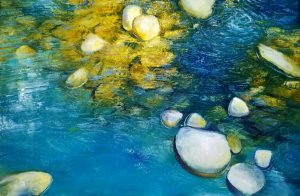 Example 5. Step three, “Finding Translucence” an oil on brushed silver Dibond, 24×36”. This is the painting’s current state with multiple layers of overlapping patterns  heightening the feeling of movement and translucence. 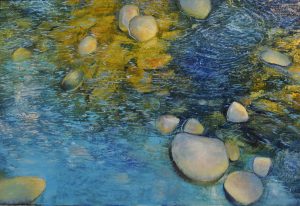 In the following examples the wave patterns are not as minute as in the previous example.  The point of view has shifted from an aerial point of view to a more horizontal view across the subject.  The distance and the patterned layers must undergo foreshortening. The sea foam can fracture into differently scaled communities of pattern. The complementary colors can fortify a pattern. They bring the golden foreground closer to us and carry the blue horizon away from us.

Example 6. Step one of “Beach Translucence” where we see the two contrasting color areas clearly separated in the beginning. 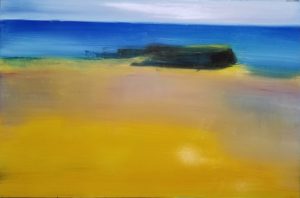 Example 7. Step two of “Beach Translucence” where the foreground and background territories are more clearly separated in preparation for their respective pattern differences. 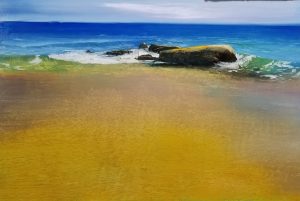 Example 8.Step three of “Beach Translucence” an oil on brushed silver Dibond, 24×36. Now the floating wafting patterns of the sea foam can be seen to emerge, separate and follow subtle surface contour variations and finally fracture into smaller shapes as they dissolve. 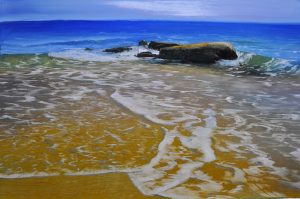 I invite you to join me in September for more online Zoom classes. Again, I present a demonstration followed by critiques of individual artist’s works. These artists’ works may be anything you wish me to see and offer my suggestions. Registration is at daviddunlop.com.  We have improved our technology using two separate HIgh def cameras  for exceptional close-ups of work in process, more sophisticated digital drawing tools in the critiques, and recordings of the programs for your later review with pausing and still shots.