Whether painting an abstraction, a still life, a portrait, a landscape or almost any image the ability of the artist to evoke the sensation of space will attract and sustain the attention of any viewer.  There are many modes for rendering and perceiving space, color recession, linear perspective, gradient shifts, diminishing edge acuity, atmospheric perspective, overlapping, amalgamating and blending of forms, and more than I will list now.

In my examples we explore tools for building deeper space. To get started let’s look at photo of a marshland (example 1). To deepen the drama I exaggerated the verticals. The grass and trees got taller, the foreground information felt denser and sharper in focus and, the water appeared deeper after I compressed the horizontal image into a square (example 2). I also exaggerated the color and the color contrasts.

Next I wanted to find a suitable substrate to begin. I looked around my studio for a failed 36×36 painting of a luminous marsh with parallels to the tidewater marsh in my photo. I had started an earlier marsh painting using the idea of a severe vertical cone pointing into a landscape which eventually flattened out into a broad horizon (example 3 and 4).  But, because my vertical cone design only climbed up the picture plane and not back toward the horizon I had a problem. It didn’t make visual sense. So this painting could serve as my substrate for my new design. The one created in the previous photograph. 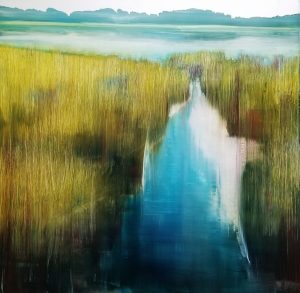 Example 4. Step four of the failed image, here I moved to make the image more abstract as a way of problem solving. It also didn’t work for me. 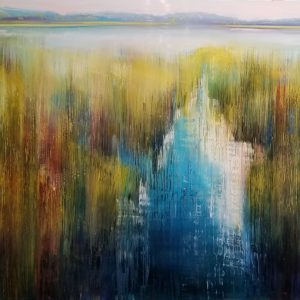 Example 5 eliminated the vertical cone and instead placed the beholder behind a curtain of reedy marsh grass.  The blues of the water now penetrated down between these grasses to give a feeling of looking through them. The water area itself expanded with the blue foreground water receding and dissolving into distant light.

Furthermore, the far edge of the marsh acquired a small inlet and a veil of atmospheric mist. The dissolution of edge information in the distance deepened the space. The beholder sees sharply focused tall grasses in the foreground but, in the background the marsh meadows appeared blended.  Edge information again dissolved in the distance. The stronger colors in the foreground marsh grasses disappear into grayer colors in the distance. Bright yellows and reds have dropped out as we crossed to the far side of the lagoon. 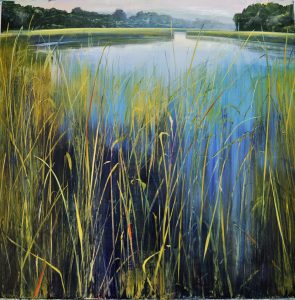 I invite you to join me in September for more Live Online Studio Painting Demonstration Workshops on Zoom:  a series of 3 Saturdays in September and a 2.5 hour workshop on September 17th.   Our Tuesdays in September classes started September 8, 2020.  In each workshop  I present a demonstration followed by critiques of individual artist’s works – the paintings can be anything you wish me to consider.   We still have a few spaces available  and you can find out more by clicking HERE.    Additionally, we offer recordings of the programs for your later review with the ability to pause and slowly examine freeze frame shots at your leisure.