Once Leonardo DaVinci introduced European artists to atmospheric distance with blurred S’fumato effects we were on our way to using mist as an agent for mystery. And, Once Claude Gelee introduced European artists to atmospheric perspective in the 1600s we had only to wait a century and a half for Claude’s admirer, J.M.W. Turner to show us the pleasure of the mysteries of luminous foggy atmospheres.

Later in the 19th century After Turner’s atmospheric wonders, Monet, Whistler, George Inness and many others would explore the suggestive power of mist and fog.  And quickly as photography was born in the 1830’s photographer’s sought to capture the effects of atmosphere with misty poetic effects

I plan to take you on a brief journey from manipulated photography and its subsequent role as an inspiration for painting misty mysteries.

On a recent humid and sunny day I found the right convergence of weather, camera, and location. I breathed my foggy breath onto my camera lens and, because of the humidity my fog artificial fog lasted. I found I could manipulate patches of fog onto different areas of the camera lens. I took some foggy shots of the fern garden bordering our driveway (example 1). Next, I wiped the fog from my camera lens and repeated the same composition of the fern garden which now appeared in sharp focus (example 2).  I repeated this process many times finding different effects and compositions.

I returned to my desktop computer and in Photoshop I layered some of the foggy shots over some of the sharper images (example 3). I adjusted images for various levels of clarity. What follows are examples of my sequence; first the foggy shot, then the clear shot and then, the layered combined image. 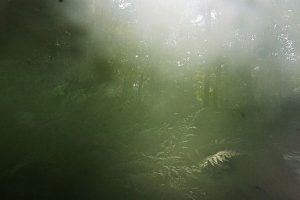 Example 2. Step two, the same fern garden without my fogging the lens. 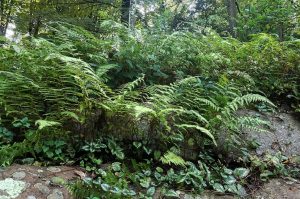 Example 3. Step three, the layered combination of the two images. 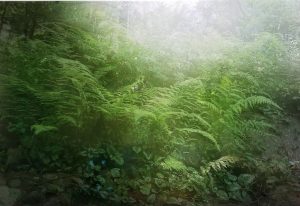 After repeating the above process many times I picked a couple of images which inspired me to begin a painting. This painting process was catalyzed by beginning with an older garden painting which could serve as a substrate for my new painting (example 4). This older painting’s colors and patterns would add ready-made density, patterns, textures and tones to my project.

Example two presents my initial over-painting of the older under-painting (example 5). Example six presents the image in its current state. I intend to add more misty glazes as soon as this stage dries but, I wanted you to see how the process begins with manipulated photography and then moves into paint. Each step in the process offers an opportunity for taking the image in a new direction.

Example 4. Step one, finding an older painting whose imagery would serve as a substrate with suitable imagery to enrich the experience of the new painting. 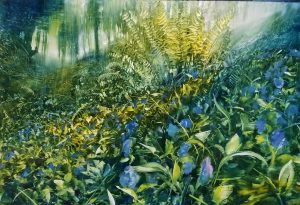 Example 5. Step two, beginning the over-painting of step one. 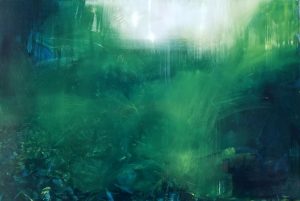 Example 6. Step three, the painting in its interim current state. 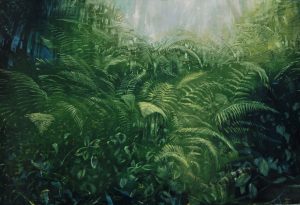 I want to renew my invitation to you to join me for online Zoom demonstrations and critiques at Daviddunlop.com