I imagine you have driven on hilly winding roads. As the road ascends it can appear to end at the hill’s climax. It appears to cease to exist. It appears as the edge of the end of the road. If it’s a broad landscape with softly rolling hills then, past the apparent end of the road you can see it re-emerge in the distance.  Its re-emergence in the distance makes the road look much thinner and smaller.

This fascinating perspective illusion has attracted landscape painters for centuries.  Within our own time we see this fascination continue in the work of artists like Edward Hopper and Andrew Wyeth.  In 1931 Edward Hopper presents a descending road as it bends down into the landscape (example 1). The road appears to end or, be laterally sliced where it begins its descent. 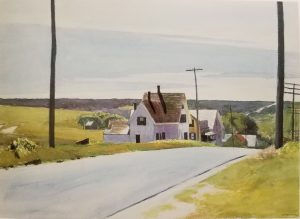 Andrew Wyeth, also intrigued by this perspective illusion, presents us with a couple of examples. Example 2, “Public Sale” offers us a descending farm lane with undulating rivulets of mud. Example 3, a later painting gives us a road with a slight rise before it plunges over the hill. I provided a small perspective diagram below Wyeth’s painting here. 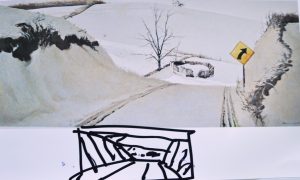 Because of the allure of the descending perspective I gave a demonstration in a recent Zoom class at daviddunlop.com (Video of that class will be available here). In my example 4 you see the demonstration piece which is 12×16”.  The principles of a meandering curvilinear descent are illustrated here. The stream approaches a falls. It disappears and then immediately reappears but, with changed perspective lines, colors, and textures. There has been an abrupt context shift which signals to the brain that the stream must have run over a falls.

Example 4.  The Initial demonstration piece for Zoom of class, 12×16, with accompanying palette which overlays some of the design sketches. 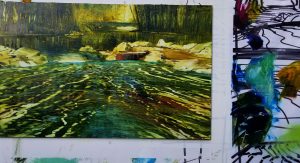 Examples 5 through 8 present the evolution of a later larger re-imagining of the scene. This new image is 24×48”.  Example 5 shows the work as it began, a monochromatic territory with various areas of the work already mapped in.  Example 6  shows me working on the painting on my wall easel. This is to help give you a sense of scale.

Example 6. Step two, me working on the painting. 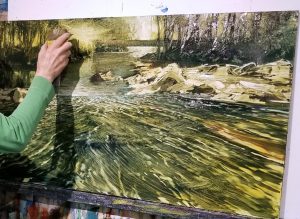 Example  7 presents step 3 with its meandering serpentine vectors  riding on the stream. They all aim toward a vanishing point  which rests below the eye level of the painting. This collective aiming to below the eye level (as seen in the horizon just under the bridge) gives the sensation of a descending stream.

descending surface patterns of the stream before reaching the falls. 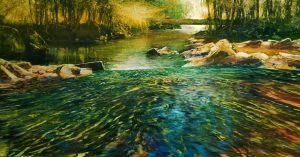 I invite you to join me in online Zoom classes which include demonstrations and personal instruction at register at daviddunlop.com .

You may want to check out my new article on how to build a painting in the current Artists Magazine.  My work is also featured on the cover and inside the June  issue of American Art Collector magazine.