By the mid 19th century plein air landscape painting was well established by pioneering landscape artists like Corot, Michallon, Millet, Daubigny, among many. They brought plein air oil sketch effects into the studio and applied them to larger exhibition works.  The border between the plein air etude or study and the subject and look of a finished had begun to blur. By the last quarter of the century the border between large a study and an exhibition work was erased.

French artists like Daubigny (example 1) and Corot led the way with their plein air subjects and loose alla prima effects inspiring artists like Monet (example 2). The traditions of composition still held but, they were also changing. Edo Japanese artists like Hiroshige and Hokusai persuaded French Impressionists they could work with simpler more graphic designs and raise the horizon from below the middle of the painting to the top. Their work persuaded Monet that he could eventually eliminate the horizon completely as we would see in his water lily paintings. 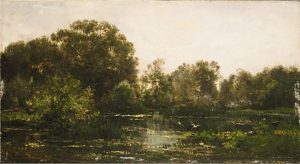 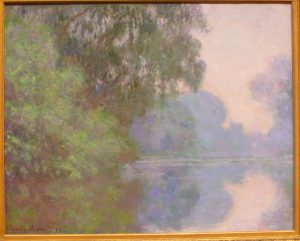 Even the floral still life painting tradition was surrendering its tight rendering  to the effects of loose impressionism. But, the compositional form of the curvilinear “V” of a spray of flowers imitating a vertically spouting fountain would retain its influence. Its history extends back to the 1600’s with artists like Van Aelst (example 3). Following the example of Chardin in the 1700’s artists learned that a stand of flowers could be compressed into a more vertical spray as we see here in Fantin LaTour’s still life from 1866 (example 4). 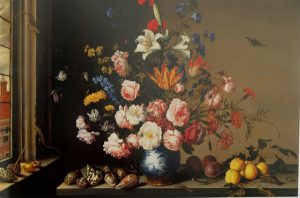 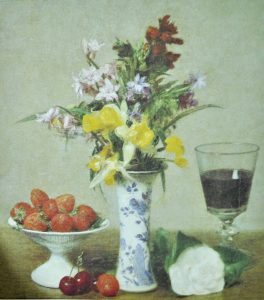 I borrowed the structure of the floral still life which uses the design of a vertical spire and then overlaid that composition onto a reversed version of Monet’s Seine Morning painting.  However, I  elevated the horizon.  I wanted to get a new  hybrid composition which you can see as  my demonstration in examples 5 through 11.

In the first example (example 5) I present some sketches in which you see my design for a fountaining spray of a bouquet superimposed on a pond-side landscape . Monet’s reversed landscape is example 6.  He borrowed that design from Corot who also borrowed it.  The ancestry here is long.

Example 5. Step one, the sketches with a couple of accompanying pond side photos for added stimulation. 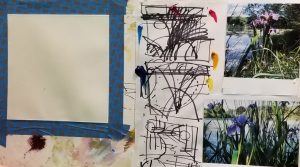 Example 6, The reversed Monet presented in its original orientation in example 2, 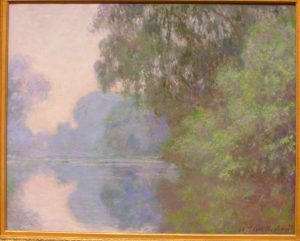 Example 7. Step two demonstrates my palette arranged with two reds, two blues and two yellows and a white.  The reds are Quinacridone Fuchsia and Napthol red, both translucent. The yellows are Gamboge and Lemon, again both are translucent. The blues are Pthalo cyan and Ultramarine, also translucent. The only opaque color is the white.

I pretreated the white surface (a sheet of 140 lb. cold press watercolor paper) which was pretreated with two coats of titanium acrylic white.  Next, I applied two thin coats of acrylic ink in selected areas. The inks are primary cyan and primary yellow. Both are translucent.

Example 7. Step three, the palette and the under layer of primary cyan and primary yellow. 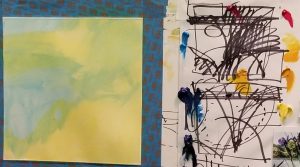 In Example 8.  Step four. I begin to block in dark blues to set the composition. Notice it’s resemblance to the reversed Monet but, with an elevated horizon. 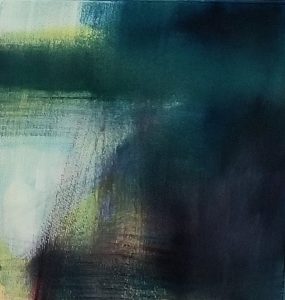 Example 9.  Step five. I begin deleting paint as I discover edges, especially the edge of the Horizon.  Neuroscientists refer to edges as where the action is in terms of neurons firing in our brain. We pay heightened attention to edges. 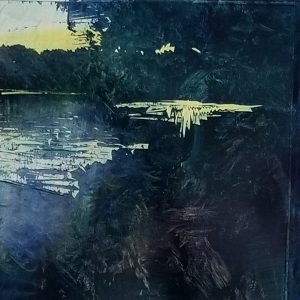 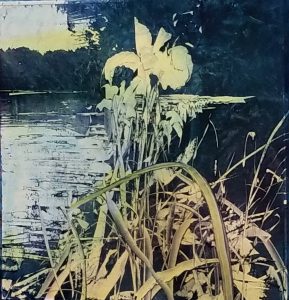 Example 11. Step seven . Here is the present state of this unfinished demonstration painting. 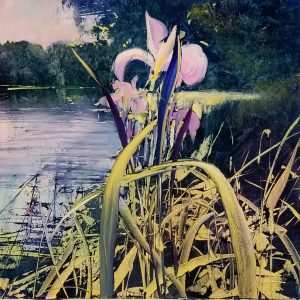 Pinks have been added to the flowers and sky. This shared color can help to unify the painting.

You may want to check out my new article on how to build a painting in the current Artists Magazine.  My work is also featured on the cover and inside the new issue of American Art Collector magazine.

You may want to check out my new article on how to build a painting in the current Artists Magazine.  My work is also featured on the cover and inside the new issue of American Art Collector magazine.