Like me, as a child you may have blown ink puddles with a straw directing spidery ink strings.  And, you may have experimented with other blowing effects. From the cave paintings at Lascaux to traditional Chinese painting blowing the paint with our lips and hands serving as nozzles has a long tradition.  You may have used a hairdryer or a heat gun to direct patterns of pigmented melted wax in encaustic painting.  Whatever your experience you noticed that the paint can move in mysterious patterns without dependence on a brush.

The air brush with its adjustable nozzles and propelled by an air compressor became a modern tool for exploiting  soft edged shapes and shadow effects.

I have assembled some examples of blown paint effects by contemporary  and historical artists as well as some of my own recent experiments blowing paint with a  hairdryer supplemented by brush work.

Artists like J.M.W. Turner experimented with wind driven effects. His concern was to persuasively suggest windy storms and steam driven locomotives (Example 1 by Turner). Today artists like Alex Kanevsky offer the experience of subject matter in motion, perhaps windblown as you see in example 2. 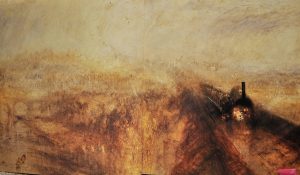 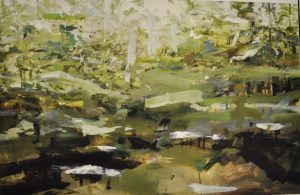 Contemporary artist Darren Waterston, like Turner, evokes a sensation of moving atmosphere and windblown effects.  I think I recognize the use of air driven tools manipulating his painting effects as you see in example 3. 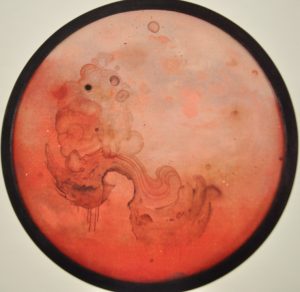 In the late 20th century Mu Xin experimented with decalcomania (a form of monotype without an etching press) and, apparently he also puffed air along edges to create softly extended, blurred patterns. Example 5. 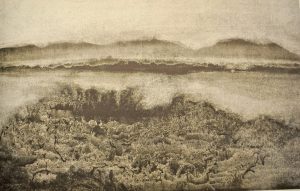 My following examples rely on linseed oil, Gamsol solvent, pigment and the subtle aiming of hot air currents from a hairdryer. I have previously enjoyed this process with watercolors as well as oil paints.

My first examples (examples 6 and 7) are the result of two of my classroom demonstrations. The works were later lightly revised in my studio. 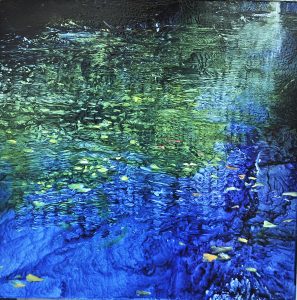 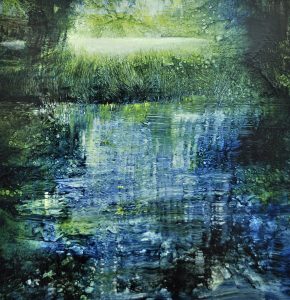 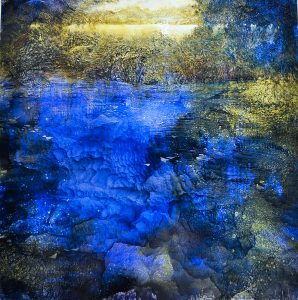 Examples 10 and 11 present two different stages of an image currently in development.  Example 10 demonstrates the image after being applied to the surface with a brush but then sprayed with Gamsol and redefined with a hairdryer. 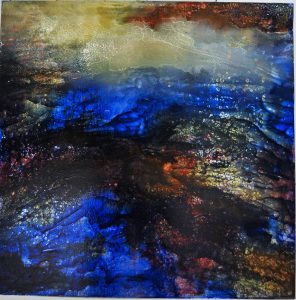 Example 11. Leafy Pond in its present but, undeveloped current state, 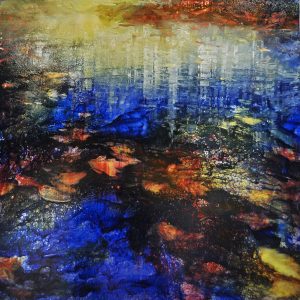