500 years before DaVinci introduced s’fumato’s smoky edges and misty landscape backgrounds for his portraits Sung Dynasty Chinese artists had already discovered the value of obscuring mist as a segway between mountains and a method for creating a feeling of mysterious space within a landscape. Claude Lorrain perfected the sensation of obscuring atmosphere for European landscape painters. 200 years later his atmospherics would be admired and imitated by J.M.W. Turner.

By the mid 19th century photographers and painters were both employing the mysterious benefits of fog.  James Whistler worked on the reverse side of his canvases to exploit the neutral pebbly surface he found there which supported his soft edged misty evening landscapes as you see in example 1. 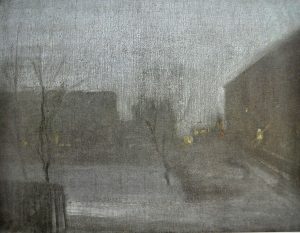 French Impressionist evocations of blurry atmosphere borrowed from French tonalists like Corot and the ambiguities rendered by Whistler. They would be followed by admiring American artists. First, American Tonalists, then American Impressionists and next, the American Ash Can School artists.  Each group takes up the theme of foggy/misty city scapes.  I have two examples for you here. Example 2 is by Childe Hassam from the late 1890s and example 3 is by Birge Harrison a decade later. 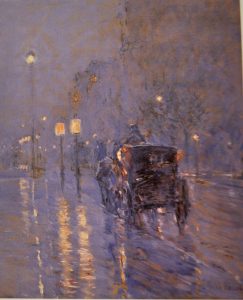 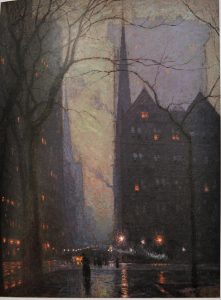 Following these American tonalists were the Ash Can artists who looked less for the Romantic mystery offered by fog and more as a vehicle to simplify and reduce their bravura visions of urban life. That urban life was simultaneously explored by the photographers like Eugene Atget or Alfred Stieglitz as you see in Atget’s example of atmosphere in a Parisian street scene. 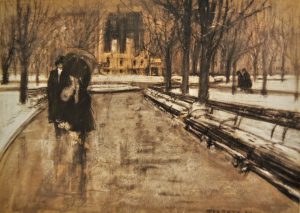 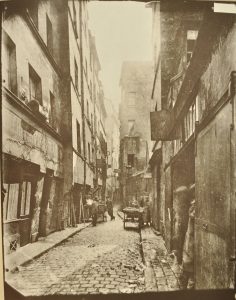 I have previously demonstrated how the ratio of contrast between light and dark diminishes over distance. An obscuring atmospheric effect will more quickly present a feeling of mysterious distance as you see in my example 6, a wetland riverside with a distant misty shore. 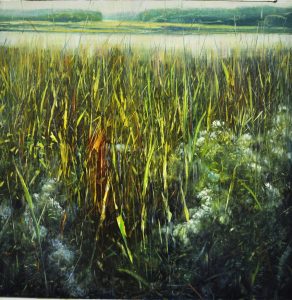 In my final examples 7 and 8 you see the step by step development of my “Misty Avenue”, oil on brushed silver, enameled, laminated aluminum. Step one presents an initial monochromatic stage for the painting. Step two presents the work after the application of opaque pastel colors which help to soften and blur edges generating a misty effect. 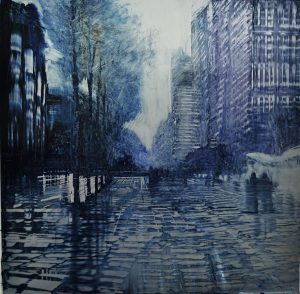 Example 8. Step two of “Misty Avenue” and the appearance of the work in its present interim state. 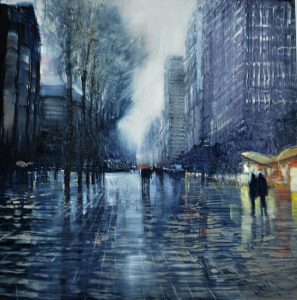