Our ability to recognize patterns and convert them into useable, purposeful and decorative material has thousands of years of history. Much of it began in the Middle East.  In 15th through 17th  centuries Persian patterns had become formalized, from Islamic script to the patterns in paintings, carpets and ceramics.

These patterns stylized animals and flora into a visual code which was arranged with deference to math and geometry. Patterns self-repeated forming recurring themes like prayer-chants. In architecture the patterns could assume a three dimensional presence as in example 1 which presents a view of a niche in Granada’s Alhambra. Colors create vibrating patterns within patterns referring to the geometry of the graphic patterns containing them. 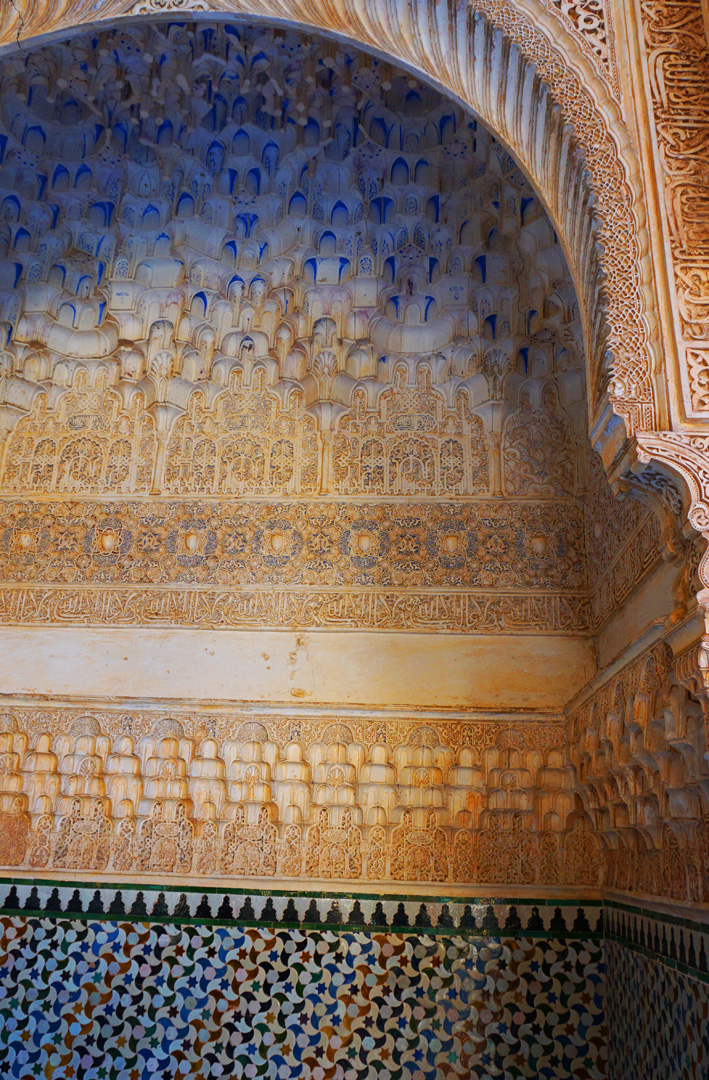 The Moslem influence in design patterns blossomed from Persia to Spain. Our human will to find and extract decorative order is elegantly managed for centuries Persia.  Example 2 presents a Kirman Dish from 1677.  Here flora curves in symmetrical tangles around birds and a central tree form. The snaking flora creates a garden setting for the birds and tree. The tree anchors our attention as we float through the garden patterns. 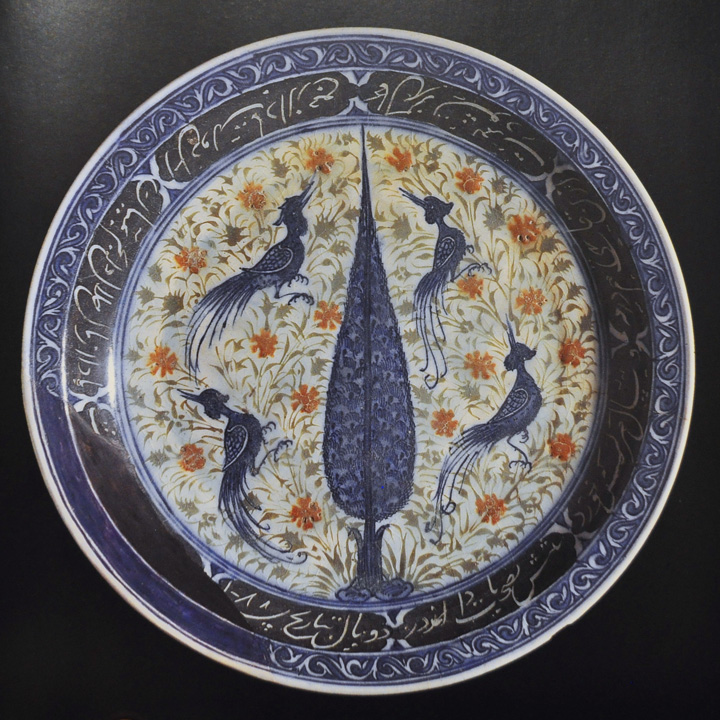 You don’t have to be a Persian carpet weaver to use the principles of recurring flora/fauna design motifs. 19th century artists like James A. M. Whistler took a fancy to these patterns as we can see in his famous peacock room in the Freer Gallery in Washington D.C. Twentieth century artists from Vuillard to Bonnard to Matisse exploited floral and other natural patters.  Matisse boldly claimed he was above all else a decorative artist.

Example 3 offers a Persian Kishan carpet from the late 1500s. Light designs float over dark backgrounds and dark designs float over light ones. Contemporary artists and designers borrow from these sources. I borrowed the idea of a variety of repeating dense floral patterns sometimes light ones over dark areas and sometimes dark imagery over a light area. I also borrowed color contrast themes. 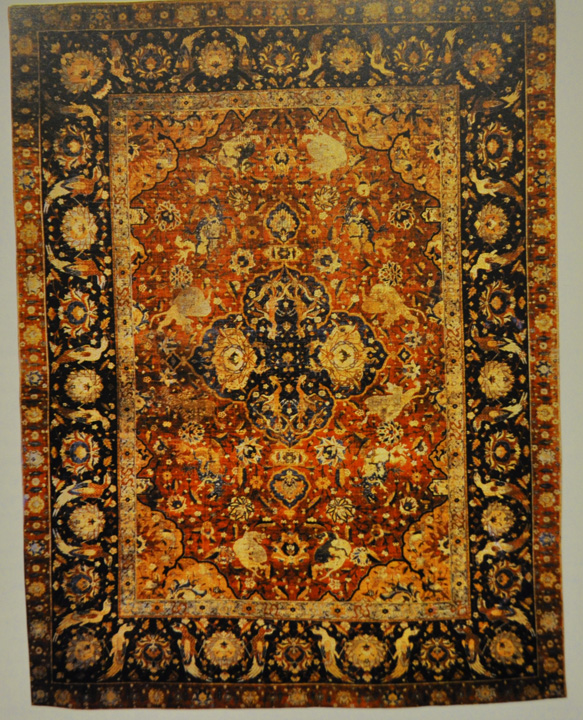 I have two personal examples to show you how I apply these Persian principles.  I give you apparently randomized marks (floral leaf and blossom glyphs posed at a limited variety of repeating angles and sizes).  Examples 4, 5, 6, and 7 show a sequence of development. Example 7 presents the image in its current unfinished state. 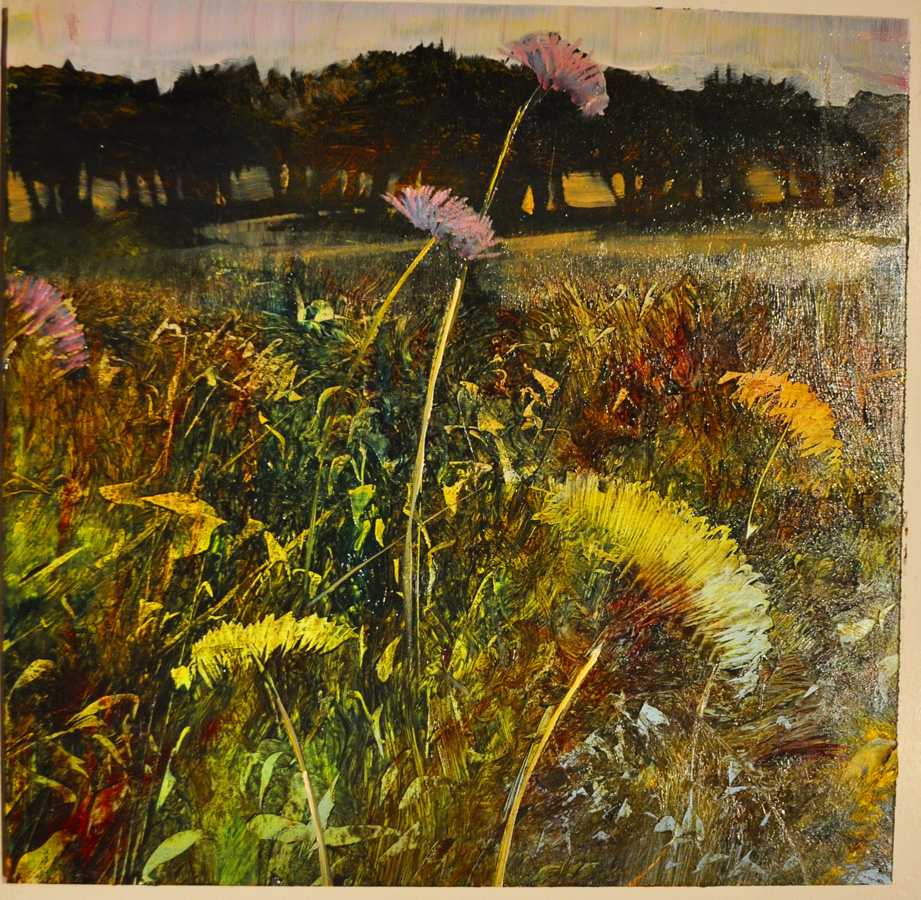 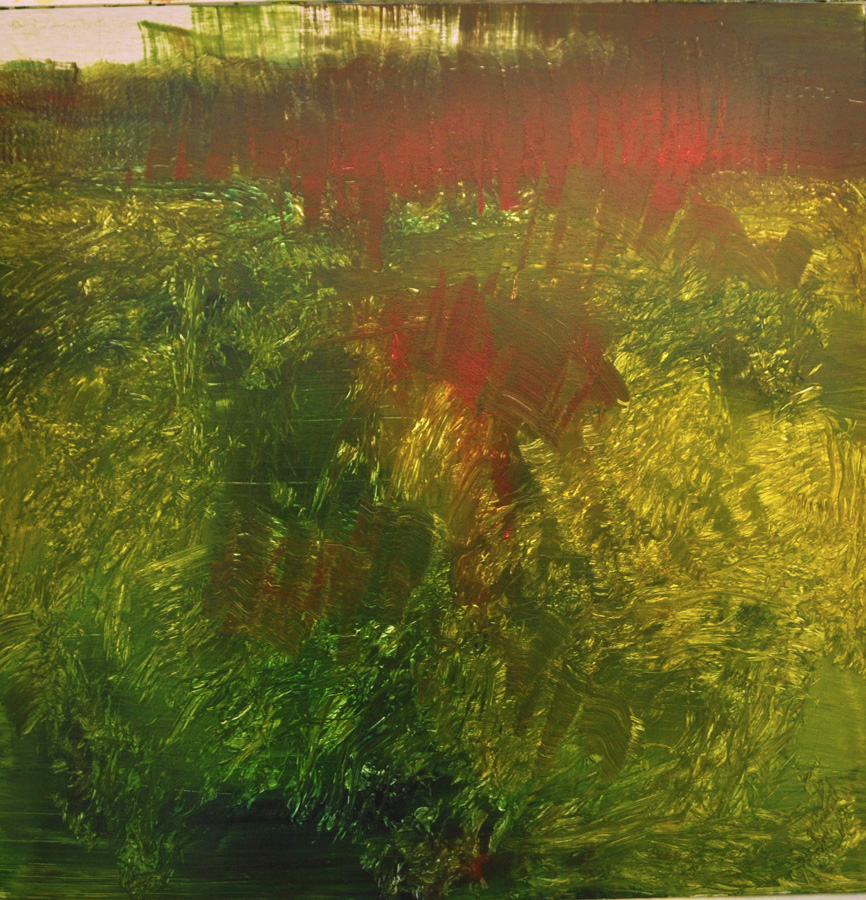 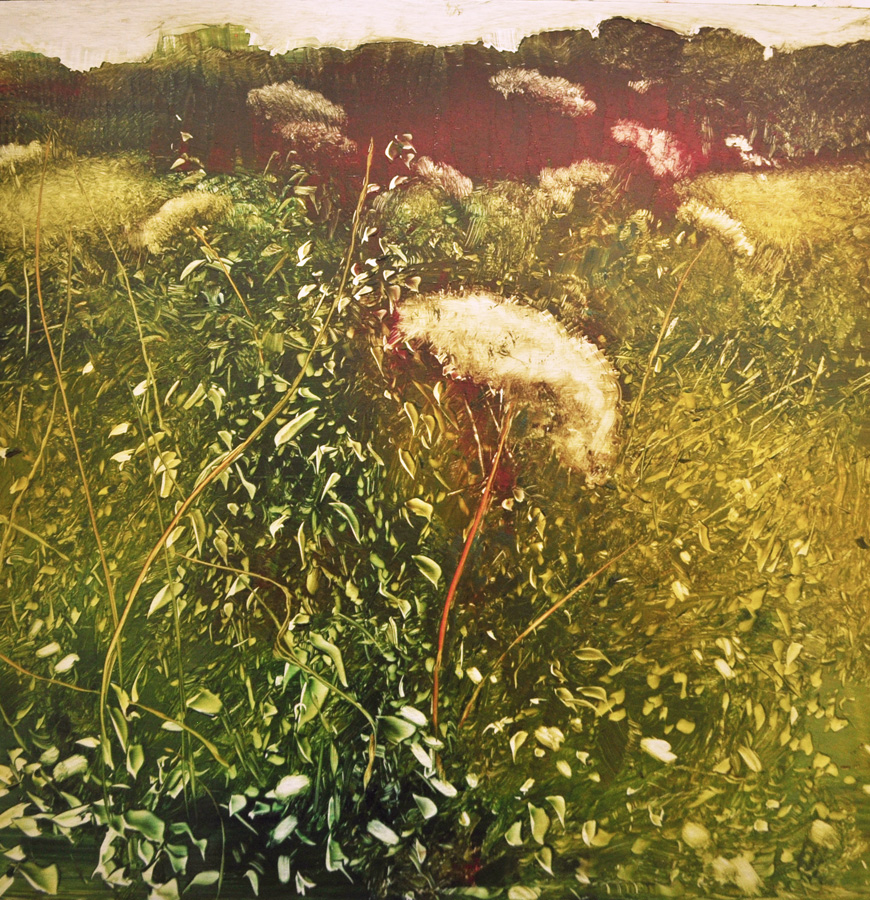 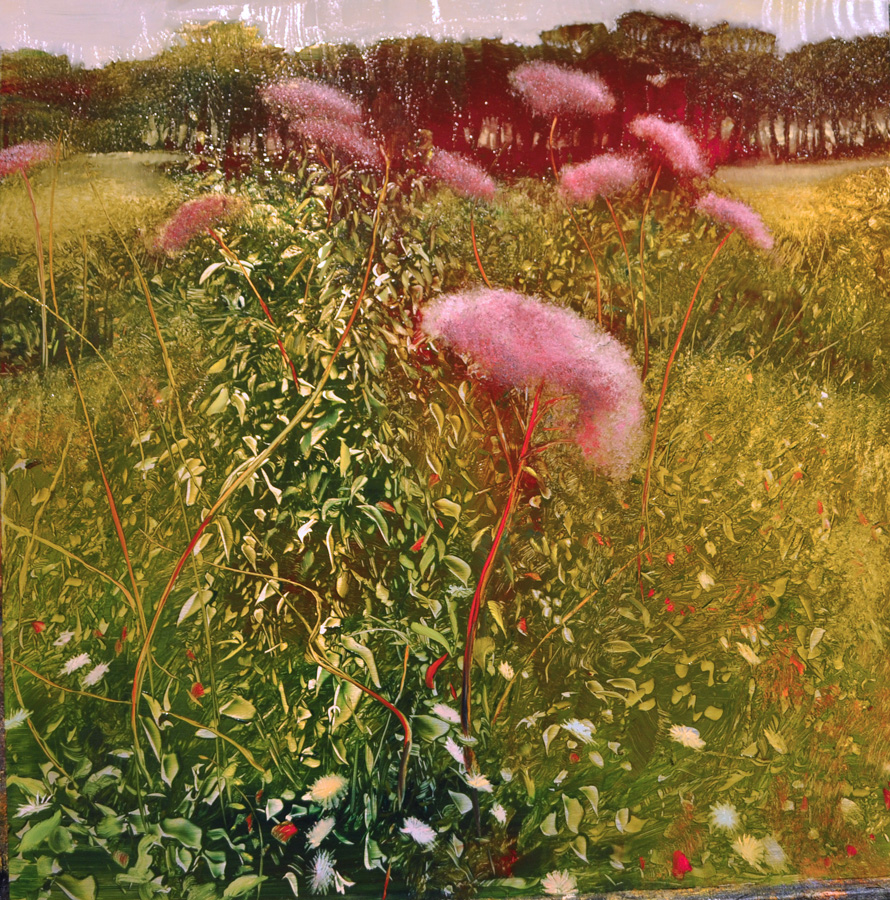 Artist/designers Richard Landis and Craig Fuller collaborated to create works embedded in the warp and weft of mercerized cotton which you can see in example 8, “Nucleus.”   The flora/fauna patterns have been replaced by pure geometry with vibrating colors.

Example 8,  Nucleus, a work on mercerized cotton by Richard Landis and Craig Fuller, 1977. In the collection of the Smithsonian’s Cooper Hewitt Design Museum in NYC. 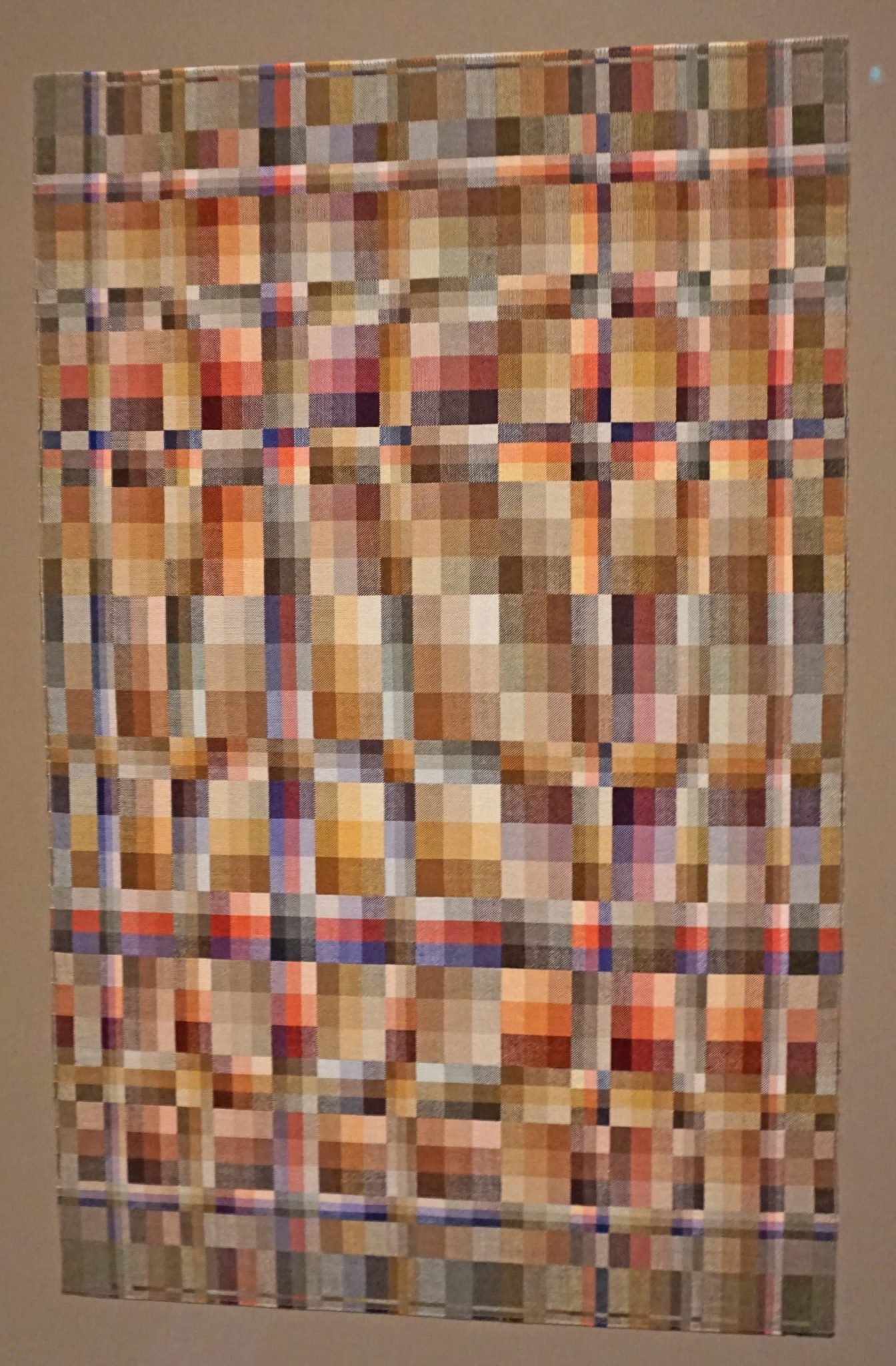 Example 8 follows the principles used by Ladis and Fuller in “Nucleus”. Here I used soft focus horizontal areas in contrast to hard edged verticals. The verticals were closely spaced giving the image a jiggly or jumpy appearance.  The part of the cortex devoted to finding where to look is confused by the multiplicity of closely spaced verticals. 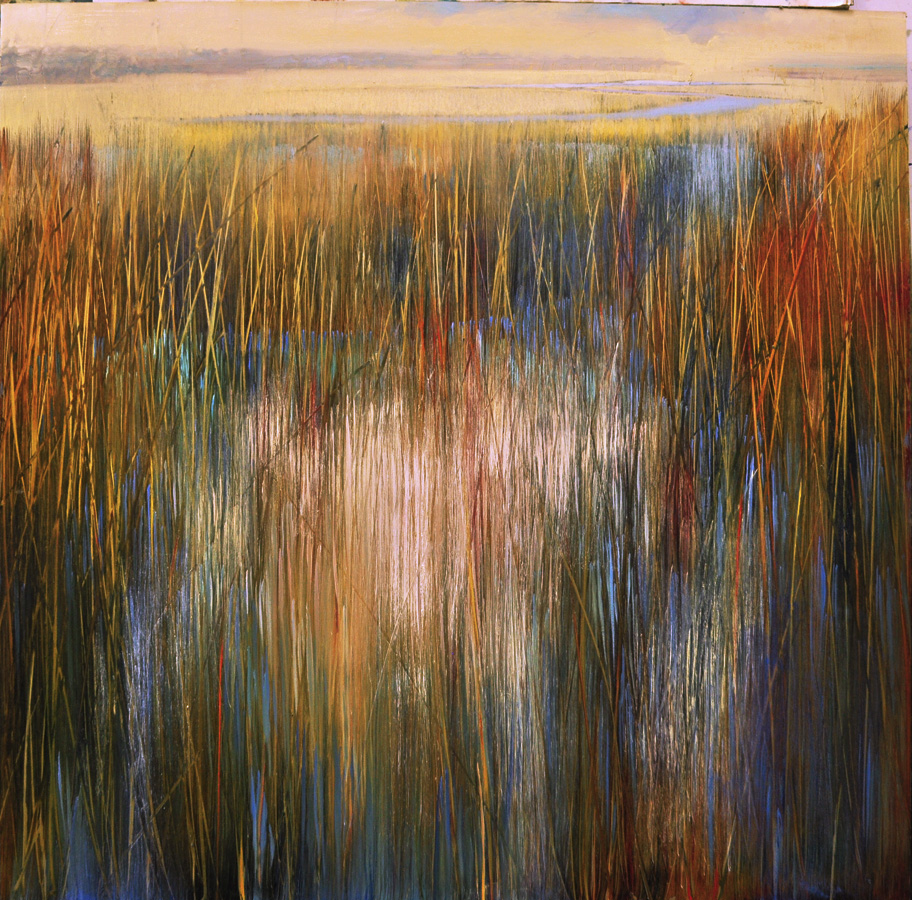 I   I Invite you to join me Sunday October 27th at 2 PM at the Ridgefield Public Library, 472 Main Street, Ridgefield, CT. 06877. My lecture is “How the Mind’s Eye Works”. See this website’s event calendar for a further description of the talk.