As a landscape painter I feel colors and textures rotate through the seasons.  My own appetite for silver, blue and lavender spikes as winter approaches.  My desire for pink and green jumps with the approach of spring. Tracking  the seasons has an impressive history in painting.  In the 16th Century Pieter Bruegel did it. In the 17th century Nicolas Poussin did it.  The effort  continues as long as our affection for landscape endures.

Early American tonalist George Inness found inspiration in the changing seasons. In 1892, late in his life he never lost this fascination.  Artists like Inness knew that winter has smaller market than for spring, summer and fall works. But, they feel winter’s charms and want to respond in paint. If an artist can present a simultaneous sensation of  warmth and cold living within the same image their more likely to find a market.

George Inness repeatedly succeeds in this venture.  From  his home in Montclair New Jersey he welcomes winter and its attendant atmospheric mystery (see example 1). Here Inness contrasts a rosy evening sky against a lavender-blue line of shadows finally  landing on a pale blanket of snow. Warm tones are played against cool ones.  The effect is a soft warmth suggested by the sky subdues the chill rising from the snow.  The fence with its rosier color undulates diagonally across the snow-field cutting warmth into the cold. 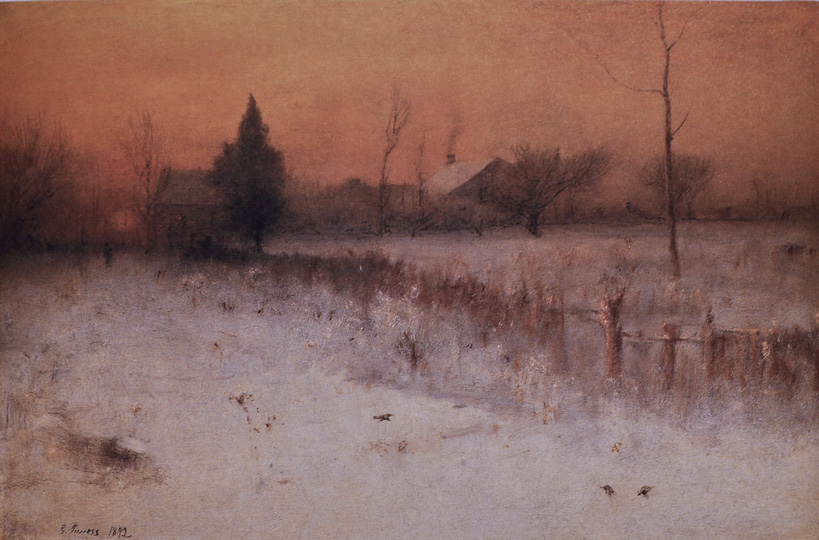 Monet’s snowy serpentine road, a classic design, proceeds in a slow meandering perspective toward a town with a distant hill marked by light tints of palest yellow and soft blue-violets.  Warm colors modify cooler colors.  Monet relies on soft simultaneous contrast effects to evoke a glow that is neither chilly nor warm. His recipe for this radiant glow is an industry standard;  apply light complementary colors of equal or approximate value with dissolved edges.

Example 2. Claude Monet, “Entrance to the Village at Vethueil in Winter” 1879, Boston, Museum of Fine Arts. 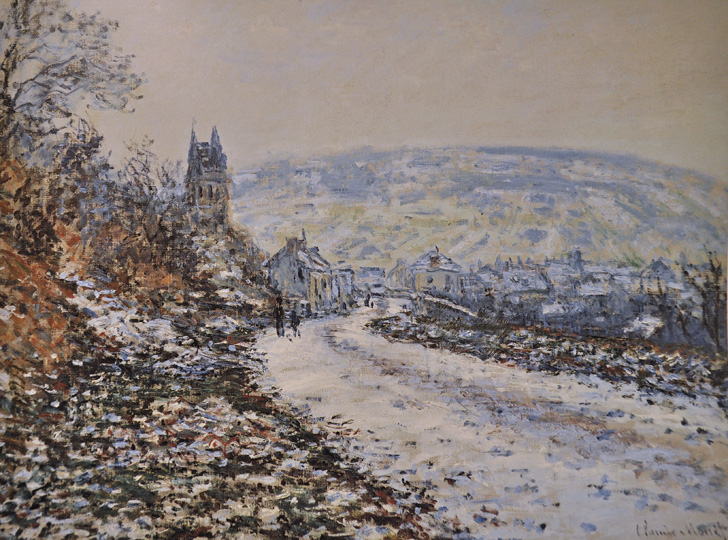 Later, in the mid twentieth century Andrew Wyeth will also warm up winter in his tempera (egg tempera) painting, “Snow Flurries” (example 3). Like Inness and  Monet, Andrew Wyeth has us enter the image from the lower right.  We ascend uphill again following a serpentine trail as we travel across a barren brown landscape. The flutter of light snow is barely suggested but, it is enough to put a challenging chill to all that warm  brown. 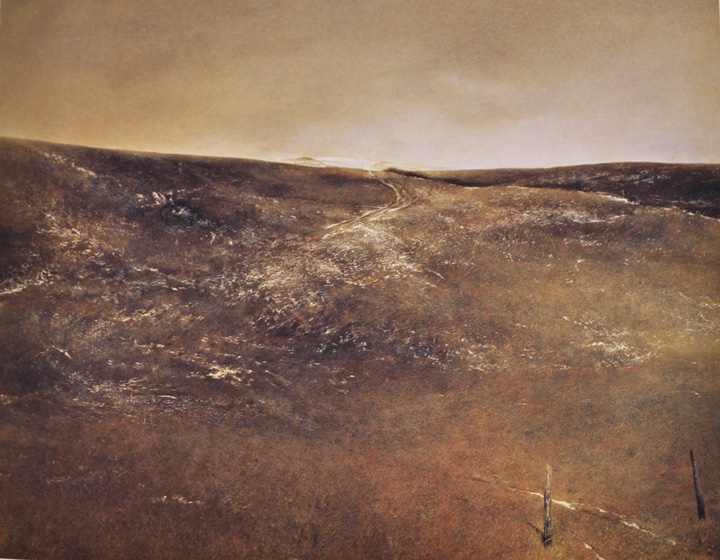 In my own examples my personal approach adopts a similar design motif; enter from the lower right and then follow a serpentine route of ascension or meander across a flat plane into the distance. An object of the landscape painter is to lure us into deep space.

In one example we begin in snow as Inness did . In the other example we begin as Wyeth did, on warm tones of a wet marsh . In each case blue-white tints interrupt the viewer’s journey into the distance. The chill of blue interrupts the warm tones. We are not left to feel the bite of winter but, merely a feeling that winter is either approaching or just passing. Here we feel the transitional moment of a changing season.

Example one is a small oil on aluminum, 18×18.  The pattern of the vertical warm reeds are interpenetrated by cool brights.  Canted Diagonals cut through a forest of verticals. 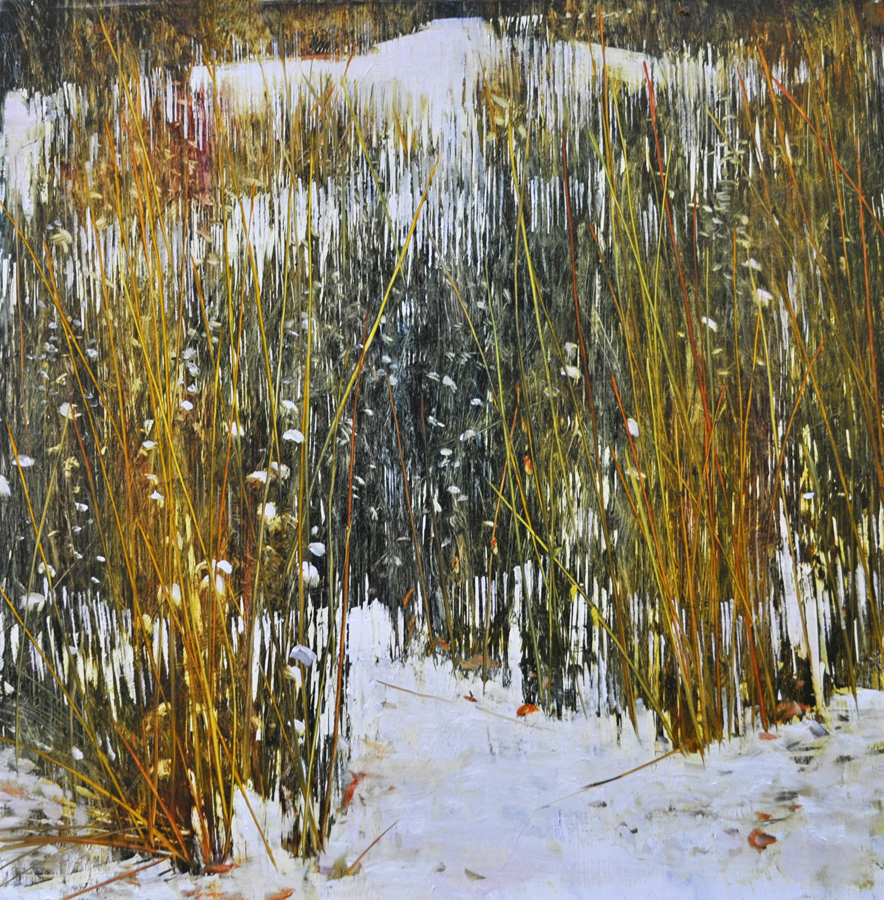 Examples 5, 6, and 7 show a step by step process in designing and coloring “Anticipating Winter” or, it could be titled “Final Frost” which places the image at either end of winter. The serpentine reflecting waterway wends through the image. It reflects a bright but pale yellow tone. The blue, dried marsh grasses stand above a warm amber-brown base. The sky has a warm yellow cast to reflect its light onto the watery channel.

Example 5.  “Final Frost” or,  “Anticipating Winter”, is an oil on brushed gold Dibond, 24×24, step one. Here is the lay-in of the design using translucent warm colors made from a combination of ultramarine blue, gamboge yellow, and carmine red lake. The use of the translucent colors allows the substrate of the brushed gold to affect the color and reflectance of the image. All oil paint was applied with a 3” watercolor wash  brush. 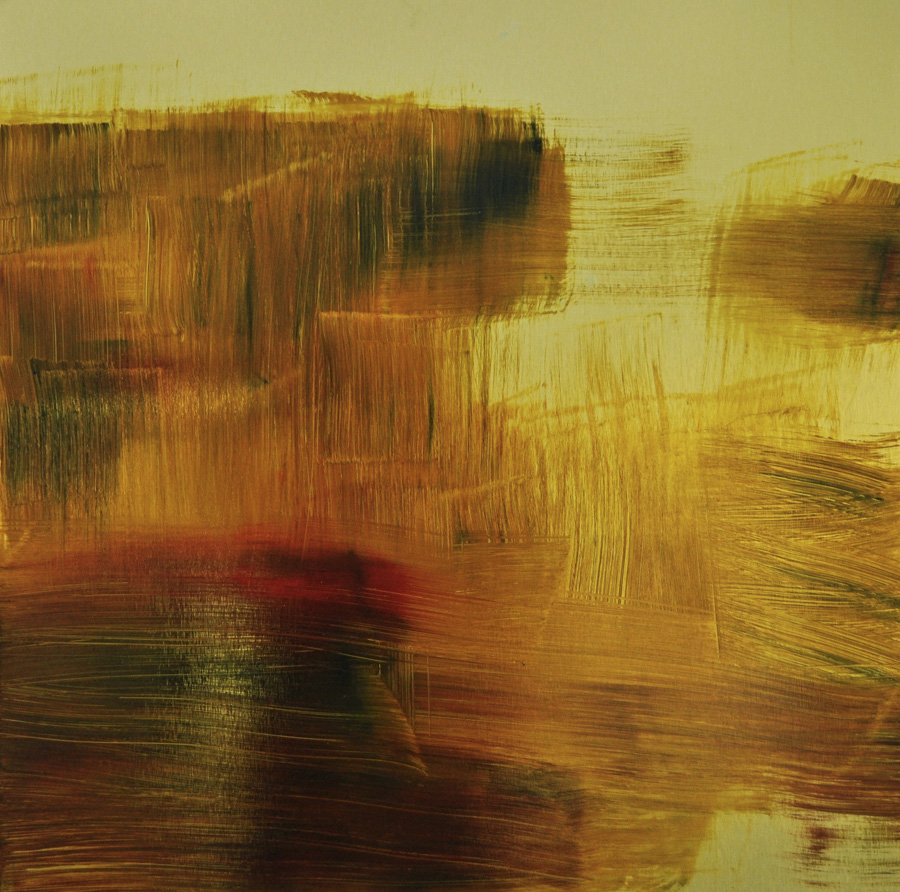 Example 6. “Final Frost” or, “Anticipating Winter”, step two: All paint and textures were applied and generated using three inch watercolor wash brushes.  The ultramarine blue has been cut with titanium white to create the effect of the frosted cold grasses. As yet the sky has received no paint and shows only the substrate of gold. 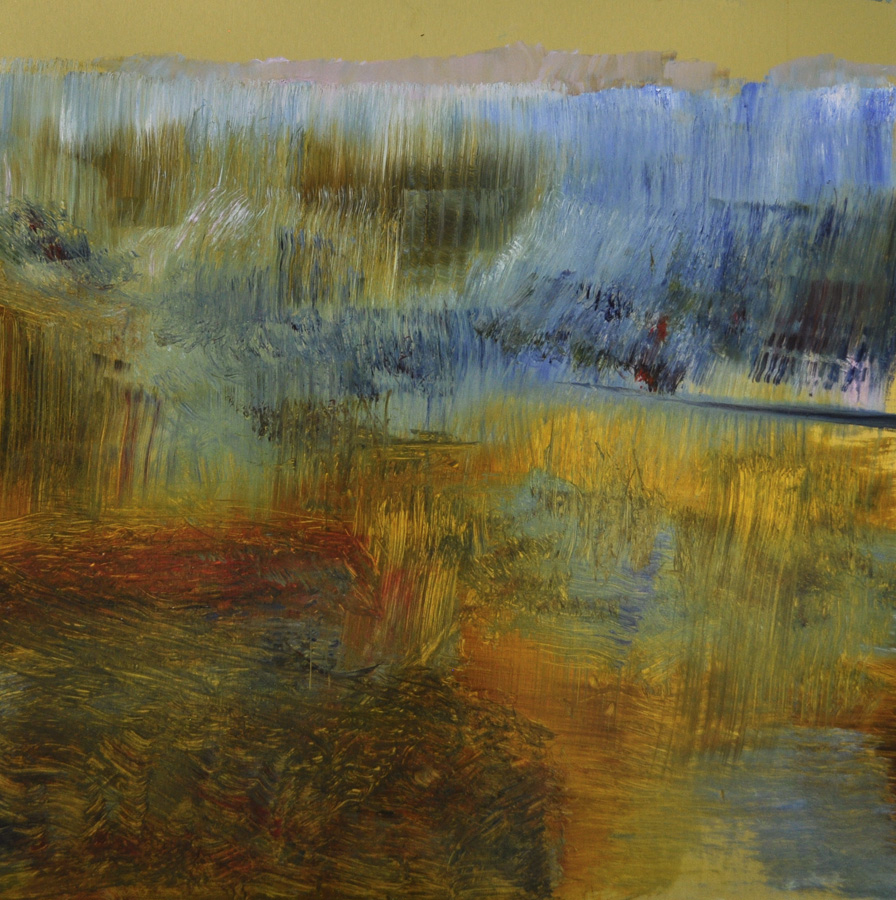 Example 7. “Final Frost” or, “Anticipating Winter” step three: The serpentine channel of the reflecting water was excised using a small (4”) rubber squeegee. Opaque paint of titanium white cut with gamboge fills the water channel. Further texturing is applied with watercolor wash brushes and, by putting paint along  the edge of the squeegee. The squeegee is then lightly tapped onto the strands of standing marshgrass. 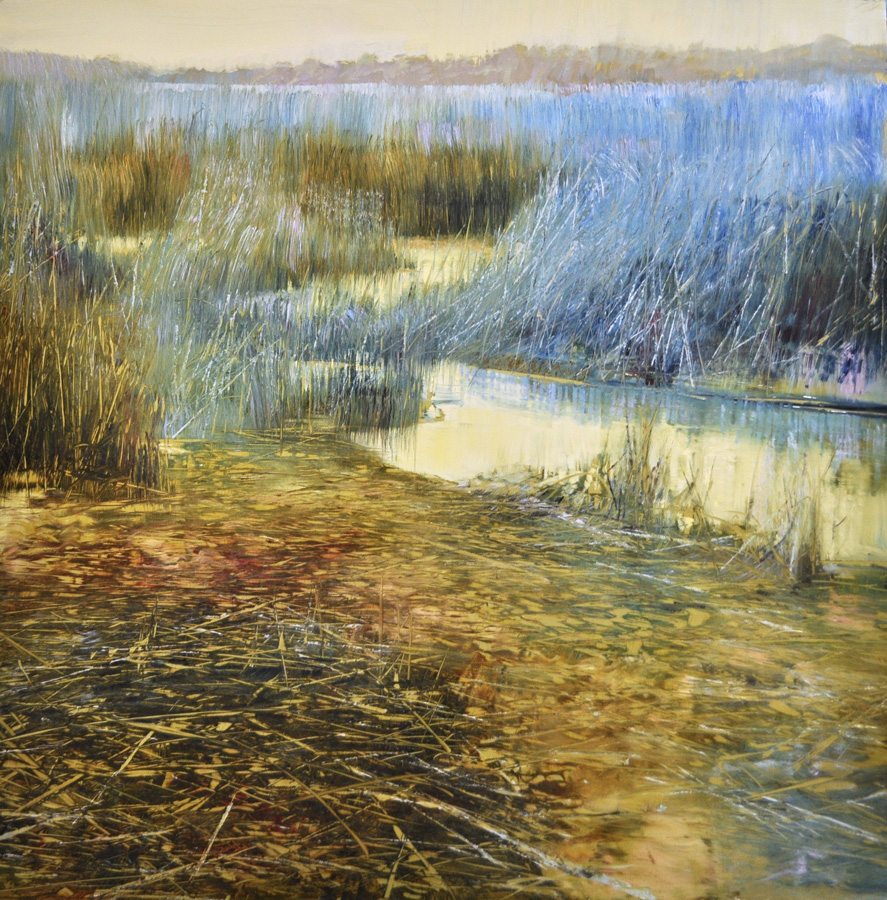