Among our first primordial human passions was collecting sea shells for aesthetic, utilitarian and commercial purposes.  Across time and cultures seashells have played a role in art, commerce, religion, and our technology.  Let’s consider the aesthetics of seashells in painting although, its history in sculpture is just as long and glorious.

By the 1600’s Holland’s trading empire was global. Their ships returned to Amsterdam with global treasures and curiosities which included exotic shells. Artists like Rembrandt  collected these artifacts and painted them as we see in Pieter Claesz’s still life from 1627. Claesz has oysters on a platter and a large Nautilus cup in an ornamental gold stand.  This three dimensional opalescent spiral form presents a beguiling and useful sculpture (example 1). 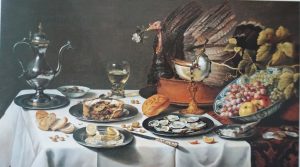 Seashells present us with semi-translucent, calcified exoskeletons with variegated colors, textures, and rhythmic biomorphic shapes. That’s a lot to offer.  Their porcelain translucence allows light to transform them into nature’s stained glass windows. Their scattered and upended presence along the shore suggests the ghosts of dancing castaways.

When gathered and brought to the artist’s studio shells can be lit to create dramatic narratives alluding to their long departed inhabitants and exotic travels.  Richard Chiriani has arranged such an image in his “Shell Space III” in graphite and pastel from 1982 (example 2).  Bill Martin gives us the impression of a naturally found arrangement of abalone shells in gouache on paper also from 1982 (example 3).  And, 40 years earlier Andrew Wyeth was inspired by the light and patterns on seaweed and shells as they naturally drifted on to the shore (example 4).

Going in for a closer more graphic view introduces us to the mixed media work of Ellen Gallagher from 2004 (example 5). The seashell motif has been transformed into a graphic map. 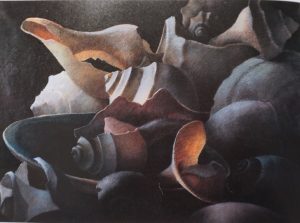 Example 4. Andrew Wyeth, “Kelp” and shells along the shore, 1940, watercolor, 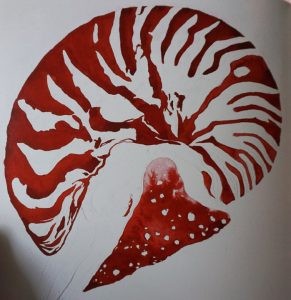 Like you, I enjoy wandering along the shoreline to see what attracts my eye. My visual menu instructs me to get low and see how the surface textures and shells can create a dramatic unity through a strafing side-lighting or, brilliant back-lighting. I put my camera lens amongst the shells pointed into the sun (example 6).

Example 6, Shoreline photo, back lit with a low, shell-high perspective, 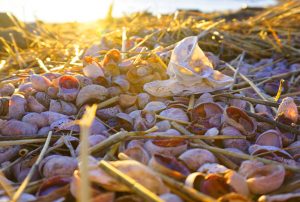 I am conscious of the canon of compositions for backlit seascapes with vivid color contrast as passed onto me through art history. That canon is continually modified by artists like the abstract expressionist Joan Eardley the late 1950s (example 7). 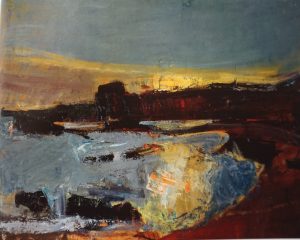 My wanderings led me into this painting (example 9) of oyster, clam and snail shells being backlit at Silver Sands State Park in Connecticut. I toyed with a series of photos in Photoshop, kept in mind the compositional history for seascape but, personally modified it, and began my painting. I started by overlaying an older piece with colorful attenuated ghostly figures.  This figurative substrate can be seen in part in example 9. It is step one of the process. Here you can already see how I have laid in the horizon colors and shapes at the top.

Example 10 presents the image in its current state after using of varieties of tools for texturing. Traces of the underpainting are still visible but, recontexutalized into a new identity. Notice how I have reversed and dramatically foreshortened the Joan Eardley composition here.

Example 9. Step one of “Shell Dance” with the underpainting, 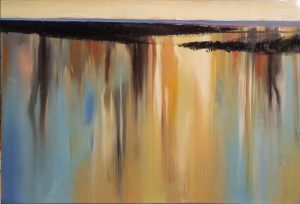 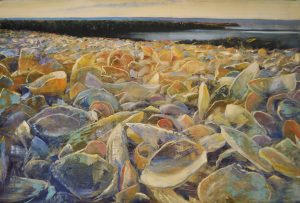