Monet’s late water lily paintings demonstrated nature’s capacity to inspire abstraction for later 20th century abstract painters.  While Cezanne complimented Monet for his color harmonies he bemoaned his lack of formal structure. Monet did use classic serpentine designs but, he dissolved edges in his pursuit of blended, moving water surfaces which camouflaged his classic compositional structures.

Bonnard would also later amplify color harmonies and fusing of natural forms in his work. They were both stimulated by the blurry colored chaos of the biological field of vision (example 1). 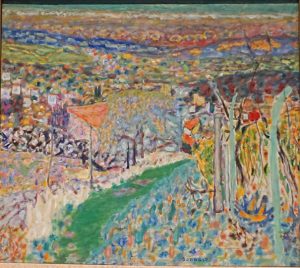 The perception of colors floating more freely within and without of an object’s borders  were  exemplified by Bonnard and Matisse and, would be expanded by later 21st century artists like Adrien Ghenie and Paige Laughlin (example 2). We can see the abstract reorganization of color into a natural chromatic progression using leaf matter as paint strokes in the work of Andy Goldsworthy (example 3).

Example 2. Paige Laughlin, oil on Mylar, “Room with a Shoe”, 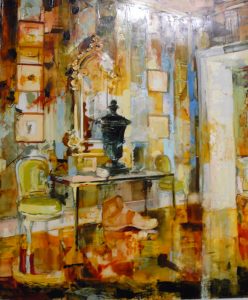 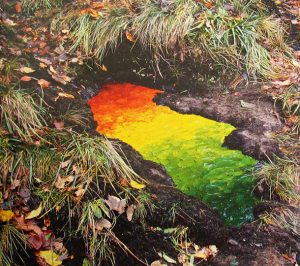 What follows is journey of discovery. I found a set of abstract patterns in stream as seen in the color enhanced photo in example 4. This image became the starting point for “Abstract Stream Motion” (example 5), oil on brushed silver Dibond, and 24×36”.  Feeling that the rocks thwarted sensation of abstract motion I overlaid them with new patterns and introduced standing flora (example 6).  Feeling dissatisfied with the lack of unity I proceeded again to further simplify abstract the image which you see in example 7.

Example 4. Step one, the photo of “Abstract Patterns in a Stream”. 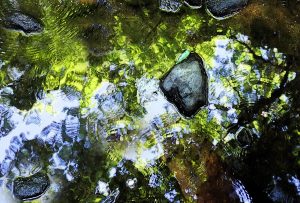 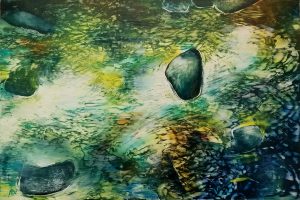 Example 6. Step three, further developments which include the removal of the stone shapes and the introduction of Flora. 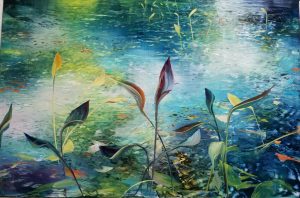 Example 7. Step four, the elimination of the Flora and renewed emphasis on the abstract movements of the water’s surface. Present state of “Abstract Patterns in a Stream”, 24×36, oil on brushed silver Dibond. 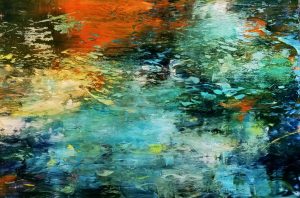 As promised in the title of this blog post I will next take you from a representational image into abstraction and back into a quasi representational work.  Example 8 presents a shoreline wetland landscape, 36×36” oil on galvanized steel.   In step two, Example 9 presents that painting submerged under another layer of vertically blended paint.  The image here has a mental grounding in landscape only because of the sharply defined horizon.

Example 10, step three, I have begun to excise the surface paint to reveal the colors in the substrate below. In example 11, step four; you see how I have taken this image back into a legible landscape which relies on ambiguous blending and shaping. 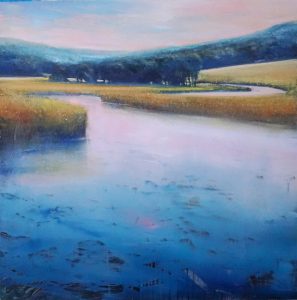 Example 9. Step two, the over-painting of step one, 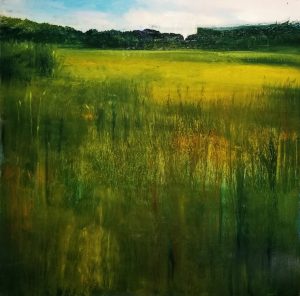 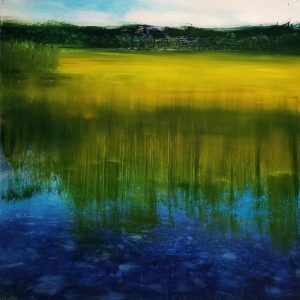 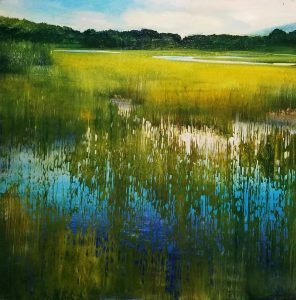 One last set of examples demonstrate the journey between abstraction and ambiguous representation. Example 12, step one, presents “Morning Stream Lights” as an abstract work only vaguely referring to a natural stream. Example 13, step two, brings the work toward greater verisimilitude while maintaining a relationship with abstraction. 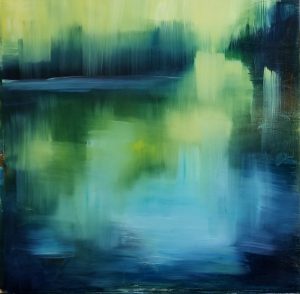 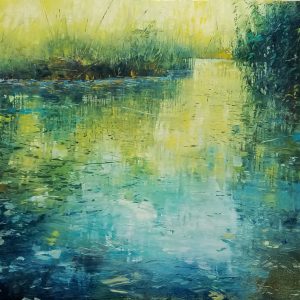 I invite you to join me in September for more online Zoom classes. Again, I present a demonstration followed by critiques of individual artist’s works. These artists’ works may be anything you wish me to see and offer my suggestions. Registration is at daviddunlop.com.