These gridworks were simple subdivisions of a field of  visual information organized into digestible patterns. A set of columns were lined up on the horizontal and vertical axis. This segmented mapping of a picture allowed it to be more easily enlarged on a fresco or mosaic or tapestry or painting.  Artists were breaking down  visual information into smaller chunks with the aid of visual machinery. The results were spellbinding expressions of realism as we find in works from Vermeer to Canaletto.

Thinking of the visual world as a map of reflectant planes altered the way we thought about visual perception. Cezanne would take the bold step of connecting a map of reflectance patterns and fitting these observations within historical compositional structures (example 1). He said he was trying to unite biological or natural vision with the history of art as exemplified in the compositions of Poussin. Poussin too, had organized his compositions with the aid of gridworks. DaVinci too had tried to break down his observations of nature into a network of varied patterns (example 2). 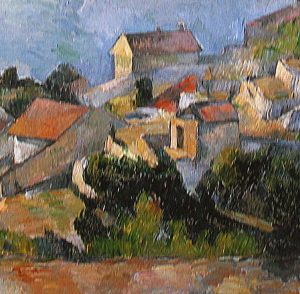 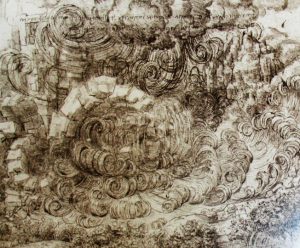 Picking up from Cezanne you can see how early cubists like Picasso and Braque decided to push the idea of nature as a construction of geometric planes of reflectance, a two dimensional gridwork.  My example here is by the cubist Juan Gris in 1923, example 3. 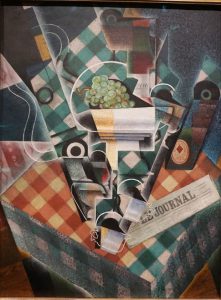 By the late 20th century artists like Chuck Close (example 4) were taking the two dimensional image of a photo and gridding like Canaletto did with his camera obscura observations. Each square of the grid receives pigment and marks commensurate with its position. 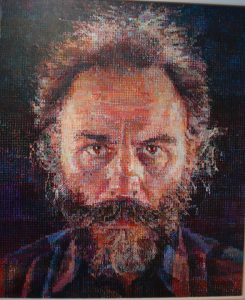 Stained glass windows were constructed with their lead mullions acting as a form of gridwork. The individual shapes of colored glass were fitted into a pattern. The light became subdivided or fractured but, the design stayed unified.

Breaking the light into smaller bits of colored  patchworks were a motivating and primary organizing principle for artists from  the Impressionists or neo-impressionists like Seurat, Van Gogh, Bonnard and Klimt (example 5). 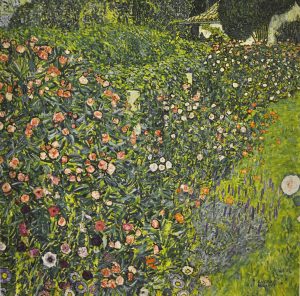 By starting with one organized pattern and then super imposing another unrelated pattern over it we can create a sensation of patchwork complexity, a field of patterns which appear to have the inchoate qualities of a natural scene.  This works because of our biological mode of perception which looks out upon the world, reorganizes the chaotic stream of neural signals and constructs from that  what it expects to see.

We look and find visual perceptions which are recognized from previous experiences,  from our menu of memories. We always guess the chaotic world of visual reflectance into a meaningful representation. Our brain hypothesizes what’s in front of us. We feed the brain all kinds of confusing sensory information and it will determine what is present, or reality, on the basis of previous experience. Unfamiliar flavors and textures get lumped into familiar categories…rattlesnake and rabbit taste like odd “Chicken”.

The following journey begins with an older painting serving as a substrate (example 6). This older painting is then recovered with pigment (example 7, step 2) . The covering becomes more thorough in example 8, step 3. Still its shadowy influence can be seen, like an old palimpsest.  After further covering of the image  new deletions are made to the dark obscuring  covering pigment (example 9, step 3). These deletions reveal more of the patterns of the substrate.

Example 6,  Step one, the underlying painting or substrate, 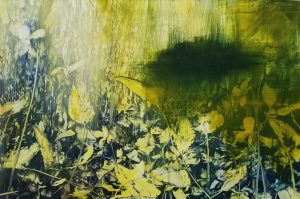 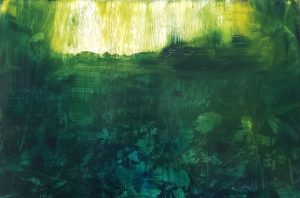 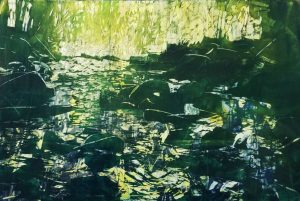 Finally, through further deletions and additions of opaque pigments a new image emerges which no longer overtly refers to its substrate but now presents a new picture constructed of fractured patterns of light. These fractured patterns can trigger a memory response, a visual hypothesis of a rocky shaded  stream reflecting the colors of the leaves above.  Enough visual noise has been provided with the fractured patterns to generate a sensation of natural confusion of nature’s visual patterns.  These patterns are united and given meaning by coupling them  edge information (marks indicating edges) consistent with rocks and trees and flat horizontal water reflections (example 10). 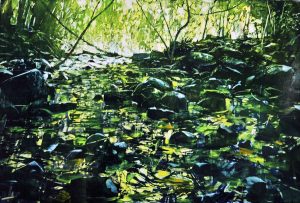