In the 1400’s we find artists experimenting with translucent water effects. A few unpersuasive noble attempts show a bare foot semi-submerged in clear water. The surface of water is indicated with only a few strands of wavy light pigment. We don’t find persuasive submerged material accurately presenting  under-water effects like subdued values and limited color ranges  until Leonardo works with Verrocchio in the late 1400’s on their painting of  John’s baptism of Jesus in shallow stream.

The subject is tricky which explains the paucity of paintings describing the phenomena. By the 19th century, the century of landscape painting, we find more artists taking up the challenge of water’s translucent effects. John Singer Sargent takes on the problem in both oil and watercolor in the first decade of the 20th century after leaving portrait painting in favor of landscapes.

I have selected two of his watercolors and one small oil which illustrate his fascination with not only the effects of translucent water in pools and streams but also his presentation of the effects of shimmering motion, shadows and blurred reflections.  Sargent’s  use of the impressionist palette and technique of opaque oil colors laid side by side for luminosity appears less successful than his use of translucent watercolor in evoking water’s  luminous translucence.  For example compare first is oil painting from 1907 of a man fishing against two of his watercolors within the same 5 year span.  He appears to have applied a slight semi-opaque glaze to part the water’s surface to enhance  the feeling of comingled translucence and skyborn reflection in the oil painting. 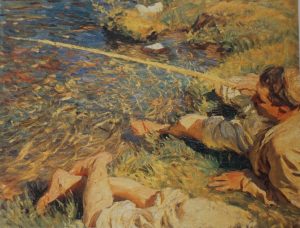 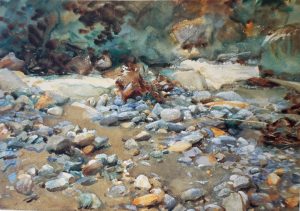 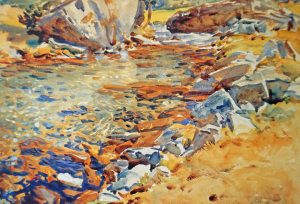 We know Sargent traveled with a camera and used it to help with his compositions. I too find the camera a valuable memory prompt. To show my process I begin here with a photo that served as inspiration for my painting, “In a Shallow Stream”.  You will see how far I departed from the original photo by comparing it with some of the step by step development of the painting it inspired. My first step was to reverse and crop the photo. 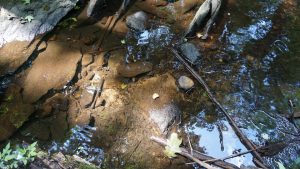 Examples 5 through 7 trace the development of the painting “In a Shallow Stream” .  I began with a 3mm thick sheet of brushed silver enameled aluminum composite, 24×36”.

The brushed silver enameled surface offers a field of variable reflectance to the viewer. This surface helps to strengthen the illusion of a sparkling stream bed. Unfortunately, the effects of this surface cannot be experienced in a photo only in a moving image or, by the viewer as they stand before the painting using our naturally flickering, saccadic vision.

Example 5. Step one, the initial lay-in of colors. 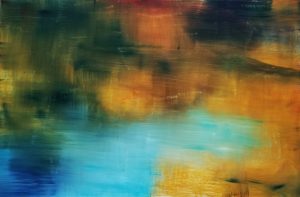 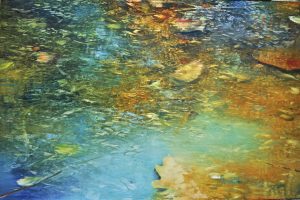 Example 7. Step three, after further surface elaborations and the addition of rhythmically spaced objects you see the present state of  “In a Shallow Stream”, an oil on brushed silver enameled aluminum composite, 24×36”. 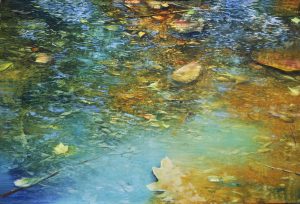 Finally I wish to show you one more oil on brushed silver enameled aluminum composite. “Blue Stream” (example 8) is also 24×36″ and presents a stream reflecting blue sky with more surface motion than the previous example. The translucent effects are rendered in the foreground which gives way to the wavy water’s surface patterns above. 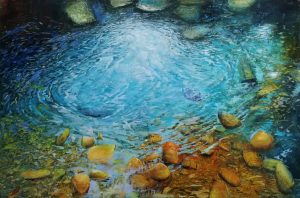 I invite you to join me on-line for my Zoom painting classes where I lecture, demonstrate and personally critique (using digital drawing tools) participants’ works  if they desire it. Registration is at daviddunlop.com for classes on Saturdays at 11 AM or Tuesdays at 11AM.

This week I offer a Wednesday Webinar lecture and demonstration only class. This is a one-time event which will begin with a watercolor sketch and proceed to an oil painting. This lecture/demonstration begins at 11 AM on Wednesday August 5th.  Registration is at daviddunlop.com for this one-time event.