In the late 18th century John Robert Cozens discovered he could make abstract patterns that could be perceived as landscapes. His insight was a hundred years premature. By the late 19th century Impressionists were already departing from their original agenda of finding nature in a glimpse to finding the emotional effects of simultaneous color patterns arranged in a simple design and inferred from nature. Paint was vibrating in rhythms and motion on the canvas.

Americans had come to Paris to investigate this new form of painting. They too would stretch painting traditions and test the limits of representational forms.  In the 1890’s John Henry Twachtman arrived back in Connecticut with modern French impressionist ideas. His paintings would be consumed with light and motion to the extent that the viewer was left to search and discover the subject (example 1, painting from Horseneck Creek on Twachtman’s Greenwich, Connecticut property).  His work tested new limits and pushed toward more abstract landscapes.  Within 10 years modern abstraction and cubism would be stealing the show. 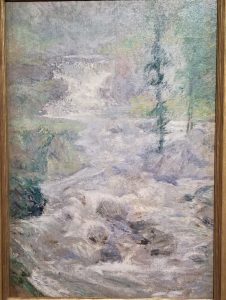 Today, when I hike along creek beds I find abstract imagery which I can arrange into simplified classical forms as you see in my photo, example 2.  The light area assumes a horseshoe composition as it wraps around a textured golden center. 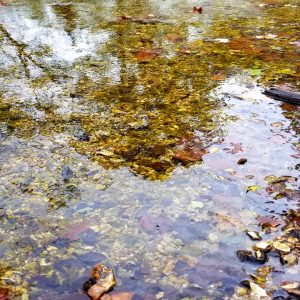 I find abstract patterns in natural settings which are rich with suggestions of motion and ambiguous identities as seen in water reflections, layered foliage, gravel beds and other chaotic natural phenomena. We enjoy looking into nature’s chaos and discovering narrative possibilities. These narratives are tethered to our memories, our pictionaries, and our recollections of familiar images. We recognize only what we have experienced, what we have stored on our mental menu. But, we add to that menu by recognizing something slightly different in a scene that feels familiar.

Example 3. Step one. The first painting which will become the underpainting. 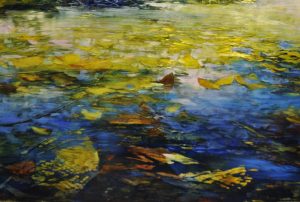 The inverted image allows me to have a dialogue between two paintings, the new one developing on top and the older one which still presents itself from underneath. Example 4 presents the first step in semi-covering the original work seen in example 3. 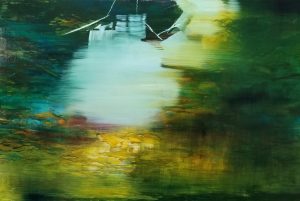 Example  5  demonstrates the domination of the new painting over the older one. But, the underpainting  still reveals itself in bits and pieces as it resurfaces within the new image.  I determined that some of the rocks were too similar to boat shapes and the metaphor felt heavy handed. I also felt the need for greater translucence in the surface which would be addressed in example 6.

Example 5. Steps 3, The flaws of the intermediate step are discovered. 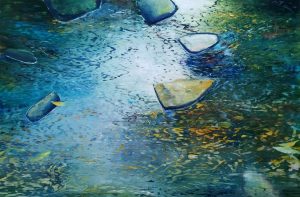 Finally, example 6 presents the current state of the painting. I continued to harvest effects from the underpainting while pursuing new patterns of reflective, rhythmic surface movements. 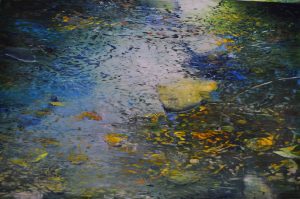 I invite you to join me in our online Zoom classes. Registration for August classes is at daviddunlop.com.  I offer a talk and demonstration followed by critiques with digital overlays of participating artists’ works. Participation is voluntary, of course. Even if you don’t submit work for critique you may enjoy watching the process.