J.M.W. Turner, the great English landscape painter, referred to his atmospheric effects as tinted steam. He perceived their atmospheric uncertainty as his paintings’ most engaging quality.  Ambiguous atmospheric effects suggested more volume, motion, and space than delineated subjects could hope to evoke.  Our brains read the lack of edge information as a spatial effect. Blurred edges also suggest motion to our brains.

Turner knew that if he could provide some mental anchorage for the viewer by providing a few legible shapes, some edge information in the foreground, he could then suggest the remainder of the motif with atmospheric effects. Claude had centuries earlier provided a model for Turner to build upon.

Turner had come upon the idea of atmospheric perspective not only through his study of Claude but also through his experiments in oil and watercolor sketches, especially the watercolor sketches. Eventually his oils began to resemble the atmospheric effects discovered in his watercolors.  Example one provides an early Turner oil sketch from 1805. Note the foreground has legible edge information while the back dissolves into blurrier shapes into which we project the experience of a woodland and stream. 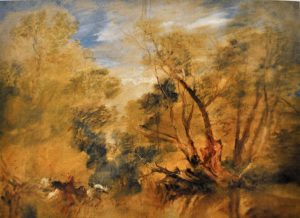 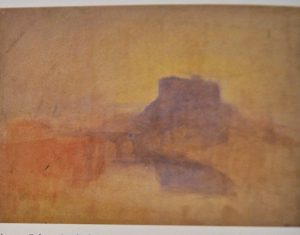 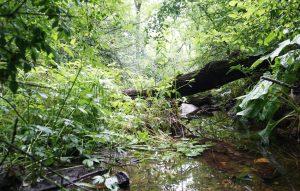 Other artists from Cezanne to Winslow Homer would find the evocative atmospherics of watercolors inspirational for the larger oil paintings. 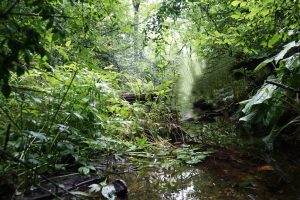 Early in the development of photography artists found ways of creating atmospheric effects.  Using software like Photoshop I am able to push additional atmosphere into an image and test my impressions.  Example  4 is my photo of an intimate glen. Example 5 is my more altered photo in which I have eliminated a large fallen log and other specific information in favor of more and softer atmospherics.

Example 4. Original photo in which I had manipulated the appearance of the scene in the camera.

I originally approached this scene a month earlier and focused not on the atmospheric space in the distance but the patterns of reflection in the water (example 6.) This example is the result from Zoom class demonstration

Example 6. Demonstration of a different aspect of the glen on 12×18, brushed silver Omegabond. 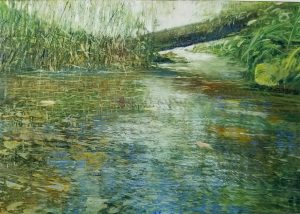 I next tried the same motif larger on 24×36 brushed silver Omegabond (example7). The resulting image did not excite me. Consequently I decided to overpaint the work but, harvest some of its original effects.  This next overlaying image (example 8) was prompted by my desire to pursue more painterly effects and a unified atmosphere. I wanted a stronger psychological effect than I was getting from the image in example 7. 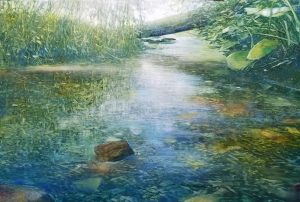 Example 8. Step two, Misty Glen, and the image in its current state, more to come. 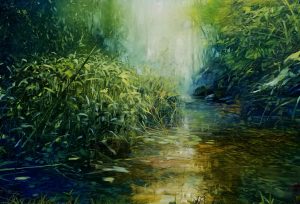