I recently discussed the role of “Common Fate” as one of our innate categories of visual organization. Building a field of unified motion has been an artist’s tool for attracting the viewer’s attention. A unified field of motion keeps the image coherent, sustains the attention of the viewer and, invests the image with an enlivening spirit, “its Alive!” We pay more attention to active than inert subjects.

J.M.W. Turner took pride in his ability to suggest motion. He invested so much motion in his later works that viewers complained he sacrificed legibility. But, motion is more evocative of vitality than objects delineated in stasis. Turner’s fascination with motion inspired him to create his famous early 1844 locomotive painting, ““Rain Steam and Speed…” the entire surface roils with clouds of movement (example 1). 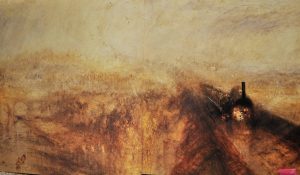 45 years later Vincent Van Gogh looked to give unified rhythmic motion (windswept) to his landscapes as you see in example 3. And, just one year later in 1890 Edgar Degas would create monotypes with pastel overlays which look as if he were traveling by train and staring out the window at the passing blurring landscape. And not coincidentally, he had been looking out train windows on his journey to pull the monotypes exemplified in example 3. Here we experience the horizontal blurring of the fields with additional movement presented in the smokestacks’ blowing plumes at the top of the image. 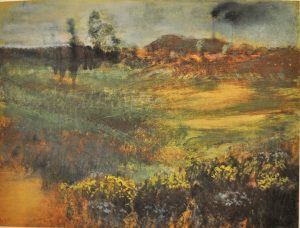 Example 3. Vincent Van Gogh in 1889, Mountain Landscape Seen Across the Walls. Those walls are the garden walls surrounding his hospital in St Paul de Mausole in San Remy en Provence. This image was inspired by the view from the barred window of his room. 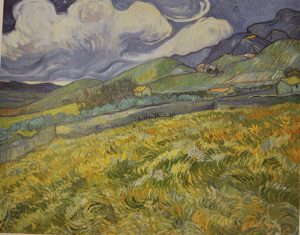 My first example of “Windswept” is oil on Dibond of wild flowers bowing under the wind. The reeds, blossoms and grasses all bend in fractured unison sharing a soft, ambient, glowing light. I present steps one and two here (examples 4 and 5). 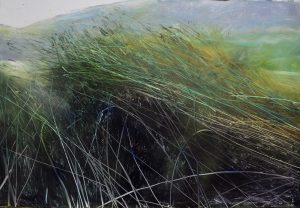 Example 5. Step two and the present state of the painting. 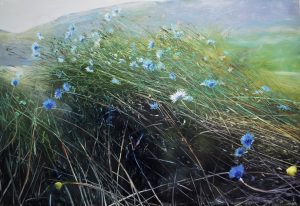 Of Course the movement of an image may be vertical as well as horizontal. Here the mind turns to the effect of cascading sunlight or rain, both common vertical events. In Examples 6, 7, 8, 9, and 10 I present the evolution of a single painting as I try to bridge abstraction with realism and find an effective way to suggest vertically unified image. Notice how many different incarnations of the same image are explored on one surface. 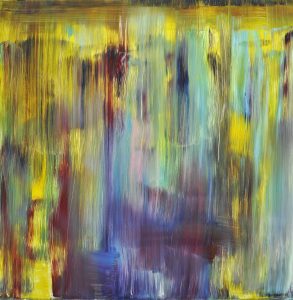 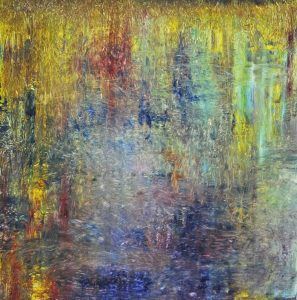 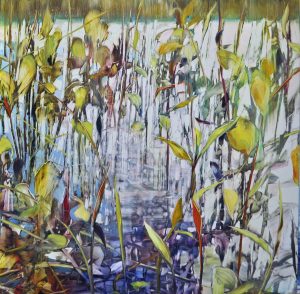 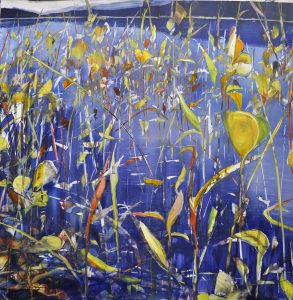 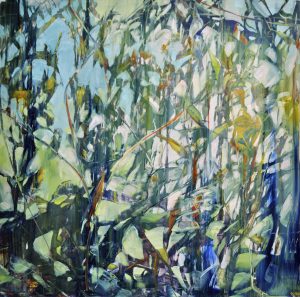 Please visit with me and my new paintings on view at my upcoming solo show at the White Gallery 342 Main Street in Lakeville, Ct. It opens with a reception (5 to 7 PM) on Saturday, September 29. The gallery is open all day Saturday from 11 AM . for other hours and information tel: 860 435 1029 or thewhitegalleryart.com
I invite you to join me this year for Jerry’s Artarama’s tradeshow and workshops at their Art of The Carolinas in November (9th -11th) in Raleigh Durham NC. I have three workshops to offer you. My Friday workshop FR1807 is “New Affects and Ancient Sources for Painting in oil/wc/and Acrylic. My Saturday workshop SA1807 is “Nature Up Close” in oil/wc/and acrylic. My Sunday workshop SU1807 is “Cities in Motion, Bridging Realism and Abstraction”. A more fulsome description is available through Jerry’s Artarama Art of the Carolinas website. Or on daviddunlop.com. Try www.artofthecarlinas.com/all-media-workshops. Also, for the complete description of my workshops you can visit this website but, under the category of “Classes and Events” on the homepage.