Right now my wild gardens are encrusted within a thin layer of ice, part of a December storm. The effect is jewel-like. As I stepped out to photograph the experience I brought with me my mental pictionary.  You and I look at everything through the lens of memory and expectation. We see what we can frame in terms of our past visual knowledge.

I went looking for compositions. I found them in the ice encased flora. When we go to write a word we use pictographs to make our letters. These letters also can serve as root for art compositions. I looked at the icy garden and projected compositions.

We can only project and alter compositions we are already familiar with. This is a fundamental path for creativity, to adapt and alter familiar forms. We make new forms out of older forms. We expand them.

Cezanne wanted to create a new art by taking the older historical forms/compositions of Poussin and merging them with the operation of our biological vision. How we see affects what we see.

I went looking at the ice garden and found arches, circles, and serpents, all fundamental compositional forms for pictures. Here’s how they appeared to me.

In my first examples I present photographs as I shot them. These contained compositional possibilities which I later refined and distilled. Example 1 offers a photo in which I found a serpentine/dragon shape. Example 2 presents the same photo with a diagram of that serpent, “S” or zig zag form.

Example 1. Photo I snapped containing the climbing dragon form. You can look into this photo and find many other compositional possibilities. 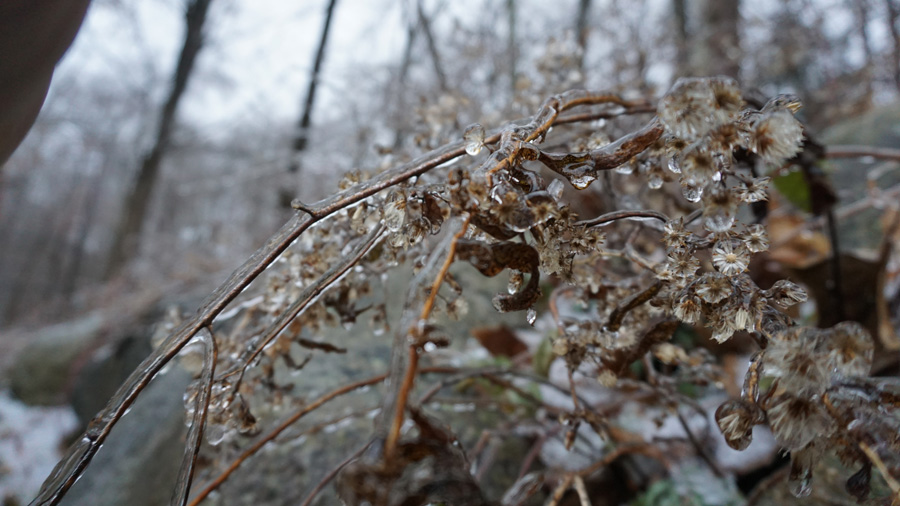 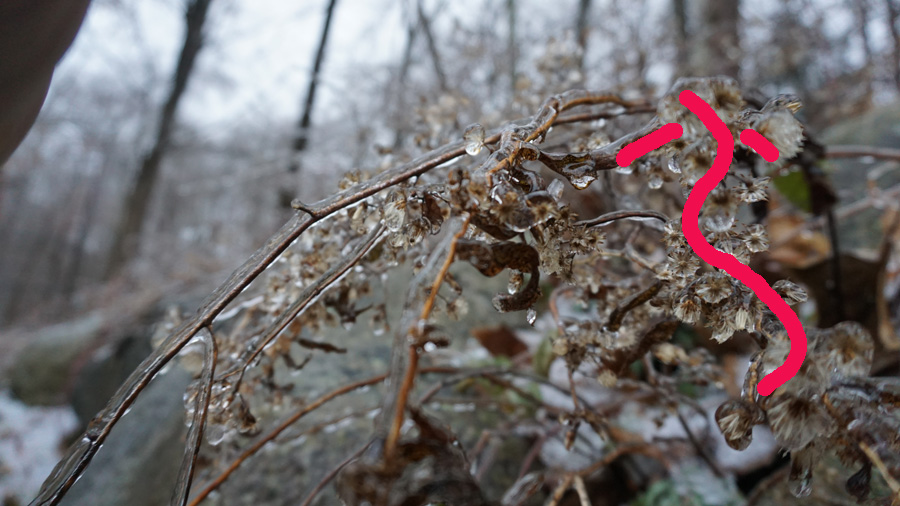 Example 3 presents the close-up distillation of that image. I superimposed a dotted red pattern for the location of the dragon. This process of superimposing pictures onto the chaos of nature is what the ancients did when they found constellations in the stars.

Example 3.  Step three the final composition, the same photo with close-up of the dragon shape as it acts to unify the image. 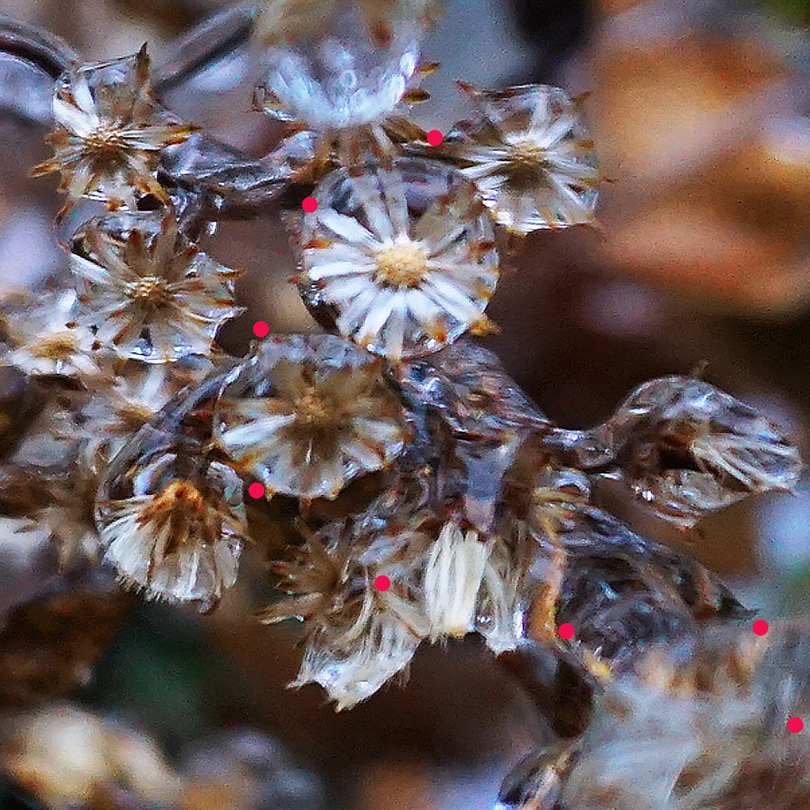 Example 4 begins with me discovering a double arched form which appears as a diamond engagement ring after close examination, as you can see in Example 5.

Example 4. Photo of iced garden with superimposed diagram indicating where I found a metaphorical engagement ring. 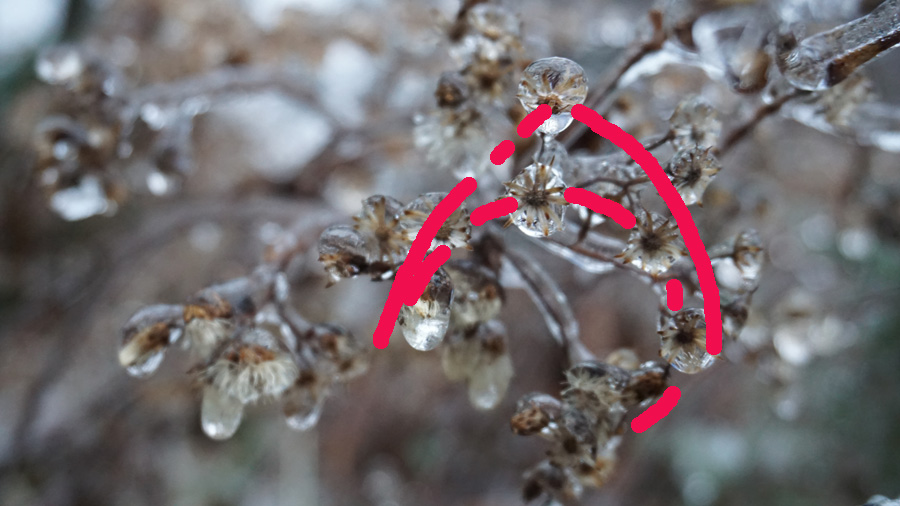 Example 5. Step 2, the final composition with a close-up of the same photo of the ring with its diamond capstone, an ice bound floret. 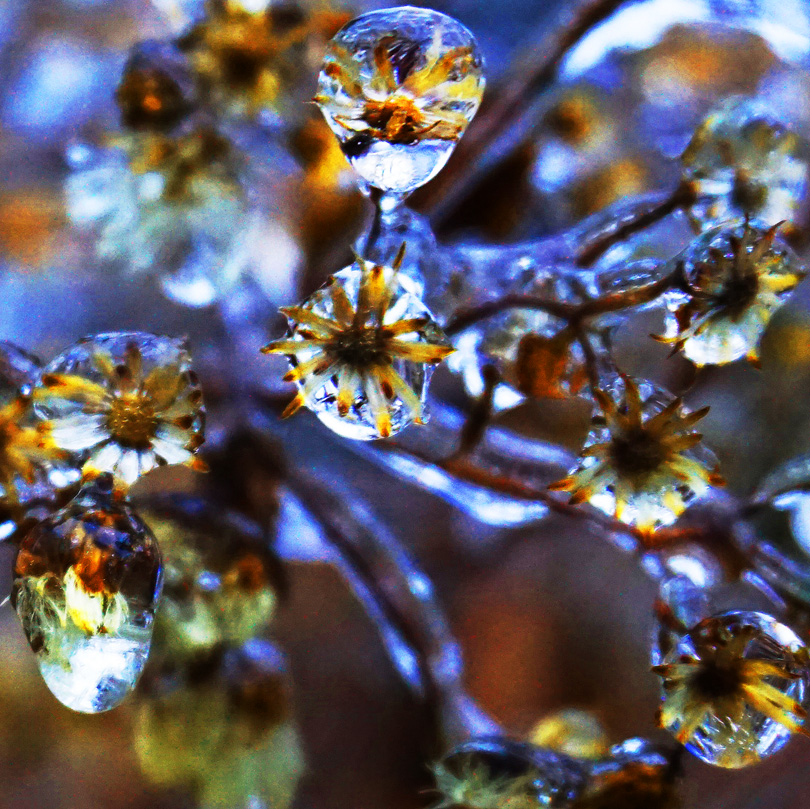 The dragon can appear as negative shape as in the photograph in example 6.  I have begun to paint this image as you see in example 7. I am early in the process.

Example 6. Photograph as premise for beginning the painting in the next example. 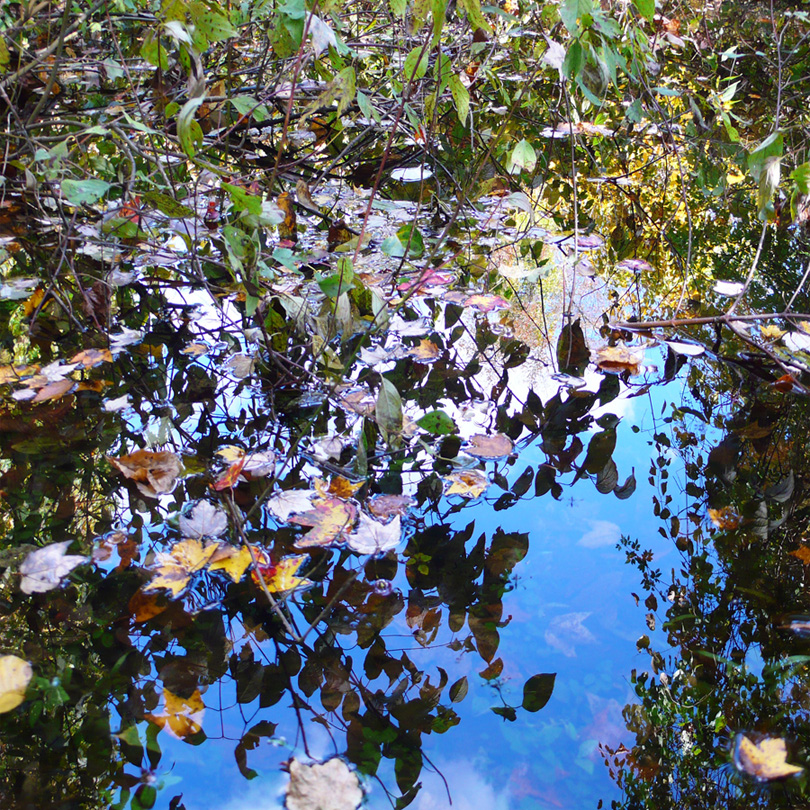 Example 7. Step two, the painting begins with a more overt reference to a climbing dragon shape working its way up the right side of the image. 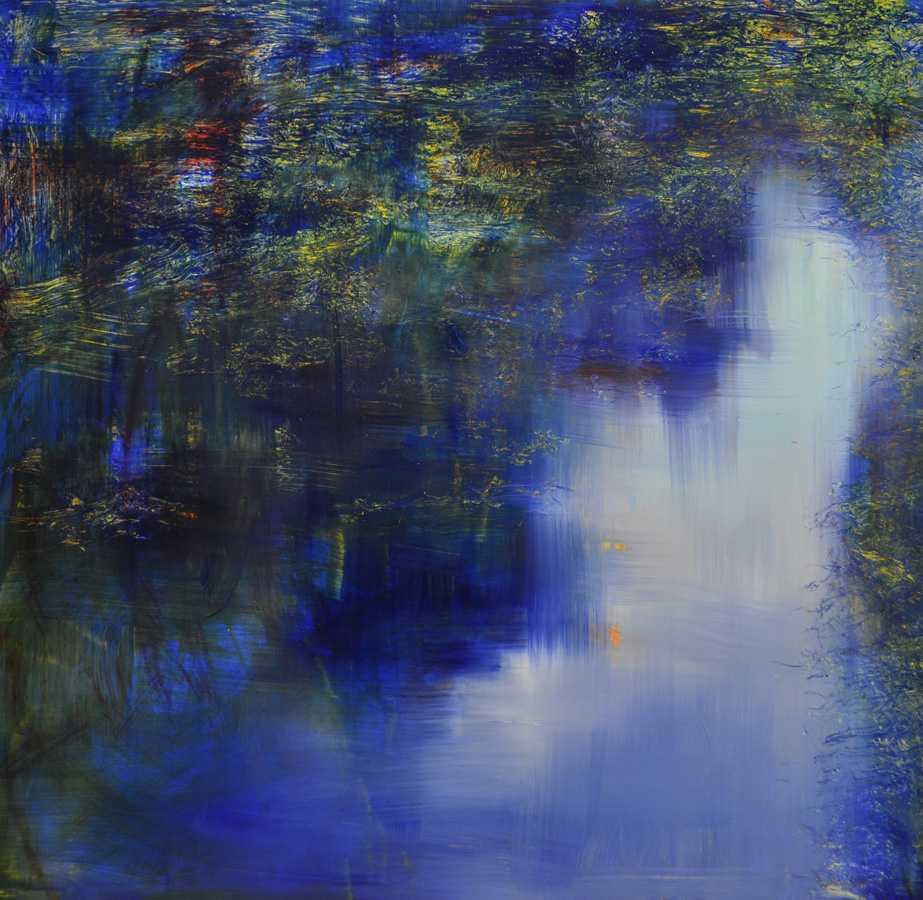 Example 8 provides the photo from which I would abstract a dragon. Example 9 offers the painting in one of its many revisions. 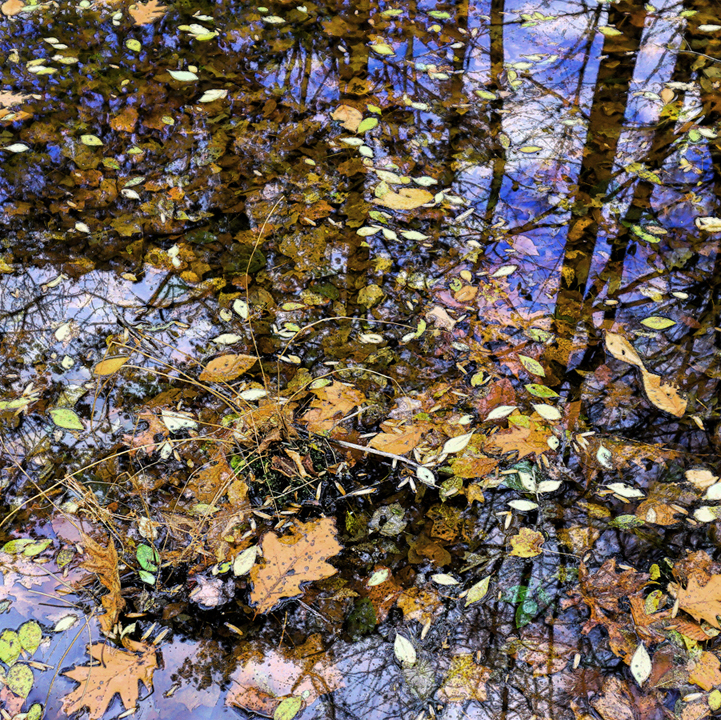 Example 9. The painting “Watersprites” derived from the photo in one of its many preliminary painted states. 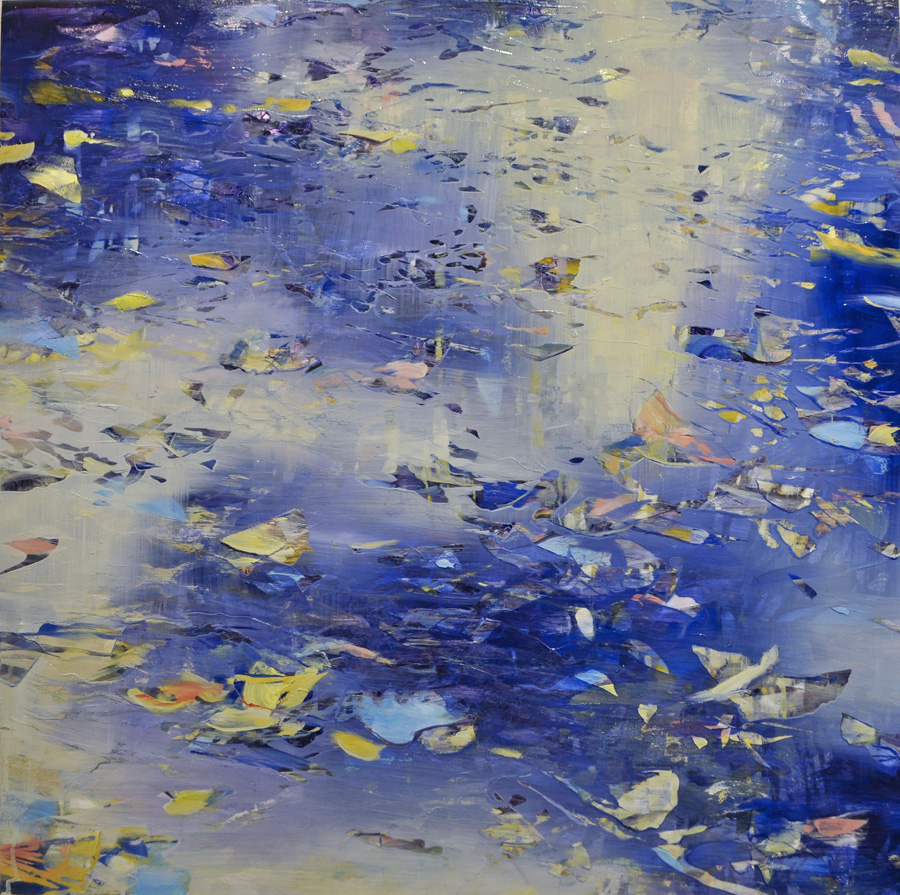 Tomorrow, Wednesday, December 18, 2019 is the first day of open registration for my classes for the winter semester (mid-January through March) at the Silvermine School of Art in New Canaan, Connecticut. I welcome you to join me in the studio there. Register on line at silvermineart.org or call them at 203 966 6668 ext.2.