Our attraction to architectural forms and space is older than our first cities as demonstrated by monuments left in annual gathering places like Gobekli Tepe 11,000 years ago.  Here was the beginning of our appetite for collective architecture and its monuments. 2000 years ago we find frescoes from ancient Rome demonstrating our fascination with 2D architectural compositions and the space they evoke.

As the Italian renaissance introduces single point perspective early in the 1400’s through the genius of Brunelleschi in Florence. Immediately artists explored the possibilities of 2D architectural design using linear perspective.  You needed to know it to succeed as a renaissance artist.

By the mid 1400’s artists like Masaccio and Fra Filippo Lippi were employing this perspective system to enhance the persuasive power of their images (example 1, Fra Filippo Lippi). The principles of the system gave new freedom to artists to invent believable spaces in paint. They combined and recombined arches, walls, and other forms to build magical spaces (example 3, Albrecht Durer).  Quickly the realm of the credible was stretched to into becoming the realm of the incredible. 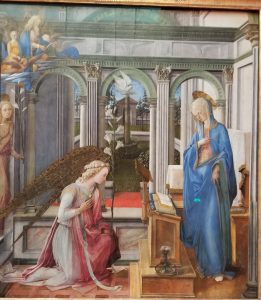 Lippi lines up his arches while later in 1500, Durer shifts multiple planes in space as you can see in his example. Advance the clock to the 17th century and we find Baroque artists fantasizing with linear perspective as their tool for persuasive exaggerations (example 3, Andrea Del Pozzo, 1685).  Linear perspective became elasticized. 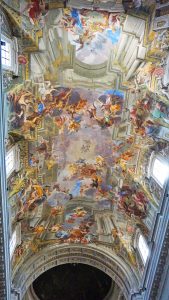 As we turned into the 20th century many artists reconsidered our presentation and perception of visual space in 2D form. Cezanne took the first great steps which lead into Cubism by Braque and Picasso.  Now architectural space was painted as a flat appearance on a surface which could shape-shift into multiple volumized illusions. 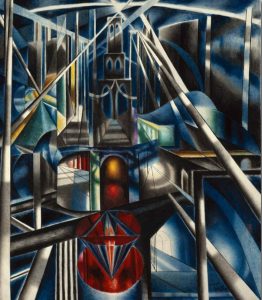 I threw my hat into this ring as well. The Brooklyn Bridge is a promising and flexible subject with its solid, elgant modern engineering married to classical and renaissance patterns with the use of antique capitals and gothic arches.

Consider how we perceive the Brooklyn Bridge, as a grand iconic utility in our minds but, visually complex and even more so as we scan it or enter and cross it.  To evoke a summary experience of the Bridge and simultaneously explore its multitudinous echoing patterns I continue to elastically explore and render it as you see in examples 6, 7 and 8. 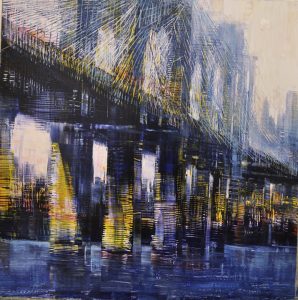 Example 7. Brooklyn Bridge Undertow, oil on Dibond, 36”x 36”, a work introduced in this blog a couple of weeks ago. 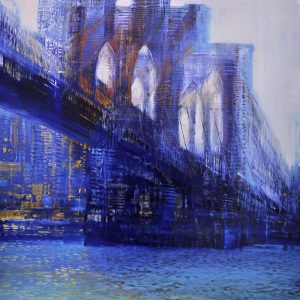 If you are in Milwaukee on January 17th, 2020 I invite you to come to an exhibition of my paintings at Lily Pad West at 215 North Broadway, in Milwaukee, Wisconsin. I will be there to greet you from 4 PM to 9PM.  My paintings will include a selection of architectural interpretations of Milwaukee (and elsewhere) as well as other landscapes.