As a teenager driving home from downtown St. Louis I let the web of the city’s lights free my imagination. So many stories lived behind so many lights. So much electricity spread modernity through the night.  The experience was memorable enough to spellbind me to the magic of electricity in the night.

To paint a modern city takes us back to the introduction of linear perspective in the early 1400s. Leonardo Da Vinci worked on a commission for the monastery in Verrocchio’s studio in 1481. He was just 29. He had mastered linear perspective as you see in example 1. The assembling of a Piazza lined with stairs and architecture provide an example of how to organize a city environment for his “Adoration of the Magi”.

Example 1. Leonardo Da Vinci sketch for the “Adoration of the Magi” 1481. 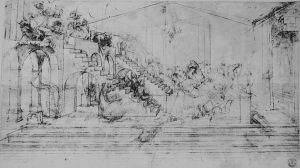 The perspective principles would guide artists through today. In the 18th century Venetian cityscape artists like Canaletto would excel at linear perspective.  Like Da Vinci  he learned to invite the viewer down avenues flanked by architecture (example 2). I would follow his examples. 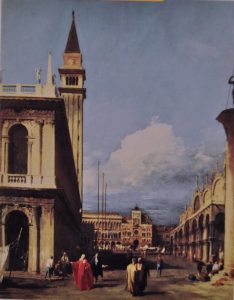 Prior to the 20th century twilight and evening cityscapes were illuminated by dim lanterns  or firelight. The glow of gas light appeared later in the 19th century. These forms of pale illumination inspired artists like James A Whistler.

In the 20th century we electrified the cities: their avenues, theaters, and amusement parks. Rural areas came next.  The spell of electric light cutting into the darkness can be seen in this mid 20th century work by Edward Hopper (examples 3 and 4). 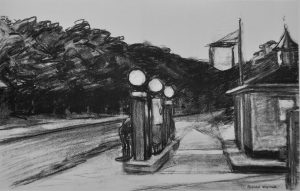 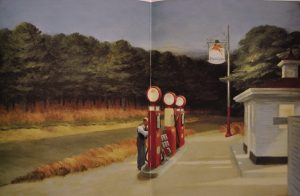 Here are two examples of the electric light reverberating in reflections using linear perspective. My plazas are constructed just as Da Vinci’s were alligned then blurred to suggest motion and the shimmering radiance of reflected light on wet pavement.

Examples 5 and 6 of “Dawn Traffic” find the flanking architecture cloaked in shadows while the street lights and car lights spread their illuminating tracks. Example 1 reveals areas of my underpainting with its burnt orange contrasting with the blue pavement. Example two takes the development of motion and sparkling lights further. 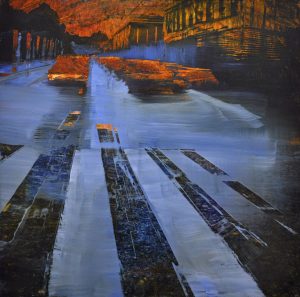 The repeating reverberating lights rely on simple linear perspective in wet twilight (examples 7 and 8). This image begins with an underpainting of primary acrylic yellow along the receding path of the line of kiosks/marquees. This substrate is then darkly over-painted as you see in example 7. By excising areas of the dark over-painting I can reveal a brighter electric yellow. The use of yellow against deep purple accentuates the luminous kiosks/marquees.

Example 7.  Step one of  “Wet Plaza with Marquees”, oil on Dibond, 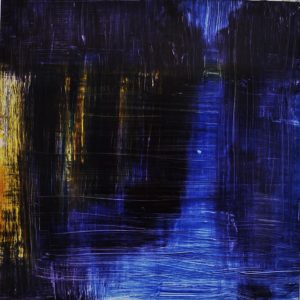 Example 8. Step two, the image in its present state,

If you are in Milwaukee on January 17th, 2020 I invite you to come to an exhibition of my paintings at Lily Pad West at 215 North Broadway, in Milwaukee, Wisconsin. I will be there to greet you from 4 PM to 9PM.  My paintings will include a selection of architectural interpretations of Milwaukee (and elsewhere) as well as other landscapes.