The sharp tug of small bluegill as it dramatically bent my young fiberglass pole brought me to look into the water. I was 10. I had to see the mighty fish who tugged so hard.  As I looked I caught a brilliant flash of colors as a 6” bluegill flipped to its side wrestling with my wormy hook. Two of us were hooked at that moment, the doomed bluegill who I ate for dinner and me with memory of a glorious blaze of thrashing color.  The bluegill transfixed me with a passion for finding those colors and excitement in paint.

The graceful turning, color-infused forms of swimming fish have inspired painters for thousands of years. Look at this example from China in 1291; colored inks on paper (example 1, detail from a scroll). I could not have found a better title than the author’s “the pleasure of fishes.” Chou’s fish lie in a classic zig-zag composition, delicately balanced in complementary positions. 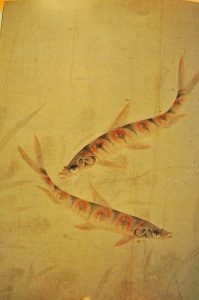 Fish can be camouflaged under shadows and reflections revealing only fragmentary bits which the observer must assemble into a unified idea. This is the part of the allure of fish found in a native habitat. To paint them in under this camouflage is to work with the art of hide-and-seek, the power of suggestion, and the pleasure of teasing hints.

To create a stage capable projecting complex uncertain movements and, suggestive of water-born patterns I began with an older painting (example 2). Next, I covered areas of this painting with smeared yellows and yellow-oranges (example 3). In step three you see how I have worked in patterns suggesting leafy reflections and undulating forms and hints of fish.  The curve as a dancing pair creating a sense of anticipated movement and direction.  Their colors are in contrast to shadowy darks.

Example 2. Step one with the painting I am about to paint-over. It will serve as the substrate for “Hinting at Reflections”, oil on Dibond, 24×36”. 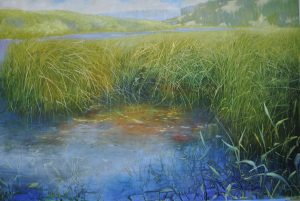 Example 3. Step two, the application of smeared yellow and yellow-orange overlays which will also serve as part of the substrate. 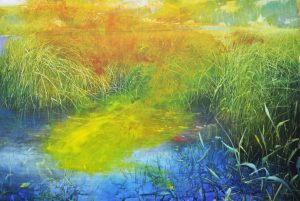 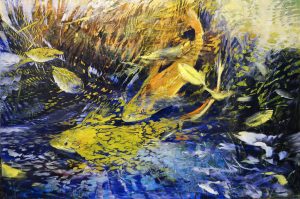 Notice the bending serpentine form is compositional structure I use regularly in various guises as you can see here in this revision of “Shallow Translucence” (example 5). 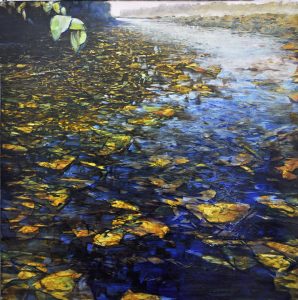 My next example is “Rising Koi” an oil on white enameled Dibond, 24”x 24” (examples 6 and 7). I called it “Rising Koi” because, I wanted to depict the fish in the upper-right rising vertically to the surface and, appearing visually foreshortened. The work was first under-painted with acrylic yellows and yellow-oranges. I then covered it in a variety of translucent colors including Napthol red deep, carmine lake, Ultramarine blue and cyan blue and, gamboge. 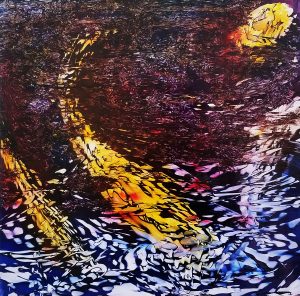 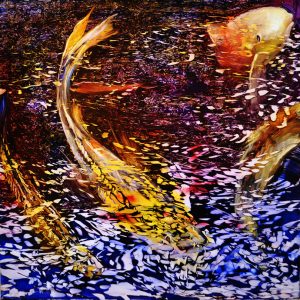