One of the most intriguing spaces of my childhood was the interior of the First Presbyterian Church in St. Louis. It was standard gothic, soaring arches, a long narrow nave with tall stained glass windows anchored above the altar. It felt like medieval storybook. I knew few other places like it except for the Fox Theater and the Kiel opera house. Both were built on the ancient Roman model of public buildings. I did not know that then. I only knew they all three felt magical with their columns and ornamented soaring spaces and, their orientation toward a luminous stage front.

Later I saw how the Roman temples were adaptations of Greek temples which were adaptations of heavier earlier Egyptian temples.  They were constructed to give a towering presence with sacred spaces tucked within the shell of the larger temple. It was rooms within rooms, Colonnades within colonnades.

Example one presents David Roberts watercolor and graphite work of the temple of Dendur. A temple rescued from Egypt and placed today in New York’s Metropolitan Museum.  The viewer can see that past the first outer columns there is an inner sanctum. We can see the distant light in there.

Example 1. David Roberts’s watercolor of the temple of Dendur, 1848, 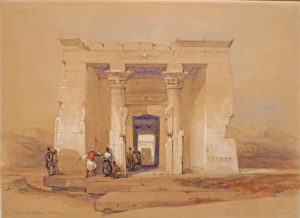 As the Romanesque basilica evolved into the Gothic cathedral the light cascaded from above through the columns and tall windows filling the nave and altar area. Standing at the entrance to the basilica you feel the yawning space echoing in sections until it reaches the light in front, the most sacred area.

In 1545 the Flemish master of Antwerp painted this altarpiece, “Adoration of the Magi” (example 2). Notice how its architecture presents columned areas in a sequence perforated by light due the ruinous shape of the old church.

Example 2, “Adoration of the Magi” by the Flemish Antwerpen master, 1545. 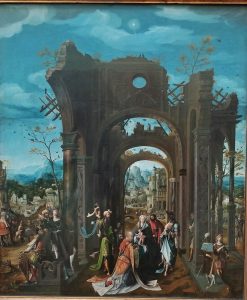 We continue build so many grand public spaces on this ancient model.  As I descended the grand staircase in New York’s Metropolitan Museum I could feel myself drawn to the light of the luminous main hall, the building’s most public space. It is flooded with natural light from above as well as pouring through the Fifth Avenue entrance. Here was the ancient story of luminous attraction reverberating through arches, doorways and columns.

I began the image with translucent darks layered over a brushed silver enameled aluminum composite as you see in example 3.

Examples 4 and 5 show the subsequent development of the image. I populated the image with figures moving toward the light. 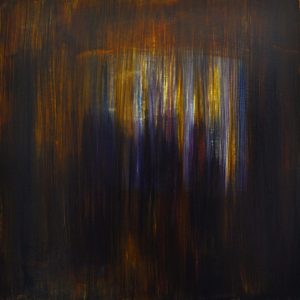 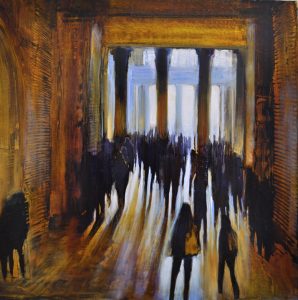 Landscapes can also covertly organize themselves around the idea of a framed entry into the light.  In examples 6, 7, 8 and 9 I demonstrate how these principles of reaching for the sacred luminous zone can work.

I began with one half of an older painting of grassy textures over a brushed silver aluminum composite (example 6). Examples 7, 8, and 9 demonstrate the step by step process.

Example 6. “Evening Tidewaters” step one, the substrate which began as a 24×48 and then cut in half. 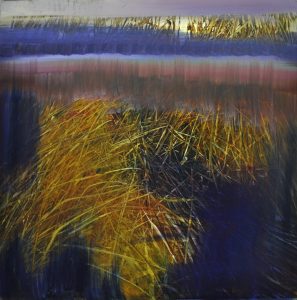 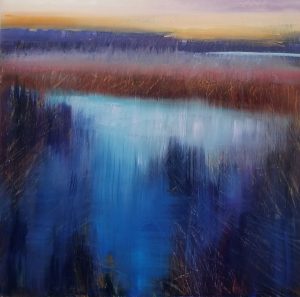 Example 9. “Evening Tidewaters, step four, after squeegee deletions and further paint tuning. Here is the image in its present state.

I invite you to join me in a small painting workshop At ArtsPlace in Cheshire, CT on February 15 and 16.  This is a landscape and nature workshop bridging realism into abstraction. Learn historic and contemporary techniques. Call Artsplace at 203 272 2787 or visit artsplacecheshirect.org to register. The small all day workshop allows provides a variety of demonstrations and personal counsel to help you as you work on your own paintings.