Approaching the middle of the 19th century cities were introduced to gas lighting. It was brighter than all previous lamp lights. Cities could further develop their night life, invent a new style and identity. As the 20th Century approached Electric lighting took over. Interiors as well as exteriors were now functional workplaces as well as recreational spots.  Downtowns with their electric signs and flashing marquees beckoned to be explored. Amusement Parks became electric wonderlands.

These newly electrified cities represented the modern city with new work and social patterns. They attracted new urban artists who adopted the name, the  Ash Can School. Here were artists looking into the urban night with its titillations, dangers, and adventures.

Artists like Robert Henri, Everett Shin, John Sloan and George Bellows explored this new electrified world.  In 1901 Everett Shinn evokes the mysteries of the artificial light and its deep shadows with his view over Grammercy Park (example 1).  A few years later George Bellows shows us the light from with the big top with his “Outside the Big Tent” (example 2) 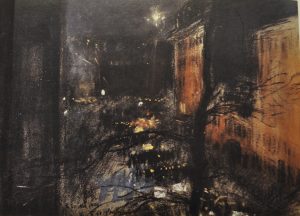 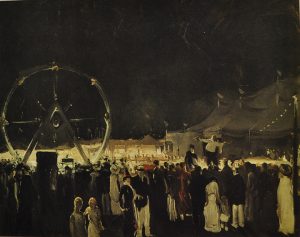 As I walk through New York I trip over the reverberating reflections sparking up from the streets wet with rain I found the inspiration of the  Ash Can artists a century earlier (example 3). 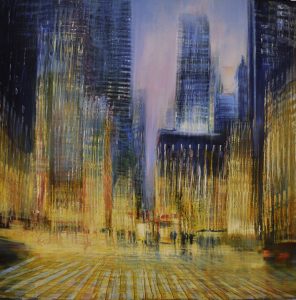 Here is an opportunity to take you into my studio and show you how I begin a city painting. The following examples are represent only the earliest stage (step one) for a couple of paintings. Example 4 shows you a wall in my studio against which lean a couple of paintings ranging from 48×48 to 24×24. The rolling chair helps give a sense of scale. Example 5 presents a closer view of this developing image.

Example 4. “Pershing Square Crosswalk” and other works in process. 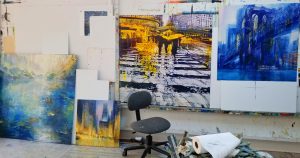 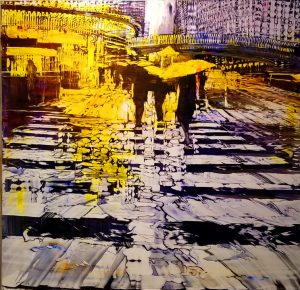 Example 6 presents a smaller work “Pershing Square on 42nd Street” in its earliest stages surrounded by various and differing resource photos. Example 7 presents a closer view of this work. 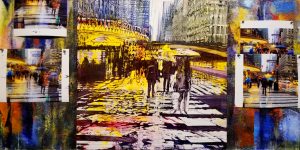 Example 7. A closer view of this work in its initial stage, 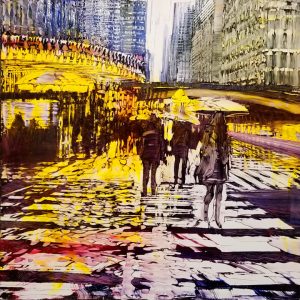 What follows are the sequence of steps describing the journey of my most recent exploration of the Brooklyn Bridge.  Examples 8, 9 and 10 take you from the earliest stage to the most recent incarnation of this image. 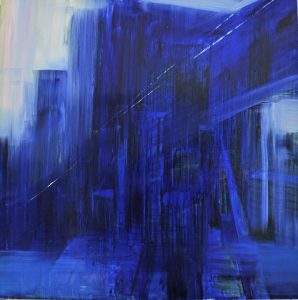 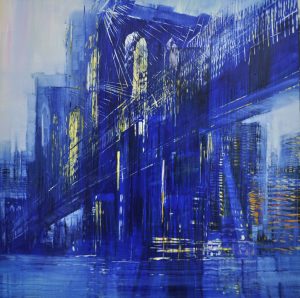 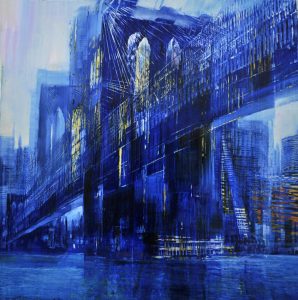 This Friday evening I invite you to join me and other artists at Susan Powell Fine Art in Madison, Ct.  for an opening of a seasonal show. Selection of some of my recent works will be on view as well as other gallery artists. The reception run from 5 to 8 PM.